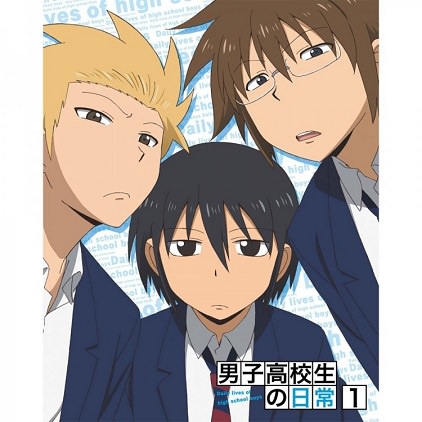 A gag comedy about the lives of boys in an all boys schools and various girls from other schools. In this “slice of life” there is no dramatic event going on there isn’t a dramatic love triangle, theres no school club trying to survive a semester, heck there isn’t even any coherent story going on. Its just talking about crazy students and there crazy lives, and somehow it works really well in this anime.

The animation is pretty average in this anime, no real errors to be seen its simple and it flows well. As sated there isn’t a real coherent story going on. They go to one place do a gag and then move on to another The various gags in the show do connect but that’s about it. So I shall judge it more on the comedy.The comedy in this show is amazing almost all of the jokes are hilarious.The writing is pretty good and so is the voice acting (though I saw it in Japanese so not sure about English version, if there is one). This is one of the few straight comedies that I was able to watch the whole thing and still wanted more. Usually I lose interest in comedies after awhile like I could never finish watamote, school rumble, or beelzebub all of which are great comedies but for some reason or another I couldn’t get into them. It might be because Daily live of high school boys is only 12 episodes, but I think its mostly all the different characters in this show. There was never a single character that I disliked or hated seeing on this show.

The characters are great in this show only a few of them have a semblance of a real back story, but since this is a comedy they don’t really need one. The boys are crazy and do weird things while the girls are nuts and violent, but both genders are also kinda realistic. My favorite character in the show is Toshiyuki Karasawa who is a guy who never takes of his cap except for one time where u see he has a huge scar on his head. I love what this guy does or says, but of course i can’t say to much or it would ruin some jokes, when u see him you will understand why I mean. He is quiet but pretty smart and handles things in funny ways. My favorite girl is literature girl real name is Yassan. She spends her time looking for people who are reading or relaxing on slopes, I can’t say why because of spoilers but the gags with her are just great.

Ok before I say anything I need to say I am horrible at judging music in anime. I never pay too close attention to it unless its the opening or ending songs, but since its noted in most reviews I shall do my best to judge it.

The opening song of the show isn’t too bad it and was kinda popish. While the ending song made me want to stab my ears, but I think it is supposed to be bad. As for the rest if the music in the show its either music wasn’t used to much, or it just didn’t leave any lasting effects on me (which could also mean it just really fit the tone and I was too focused on the jokes so don’t think thats a bad thing, I am just horrible with music is all)

I came into this not expecting much with the “school” and “slice of life” tags, most of us have seen it a dozen times, and I think a lot of us are sick of these animes and want them to die, but this show was great. It had some of the best jokes I have heard in a long time and I truly enjoyed them. I loved the characters and I loved the jokes. I would highly recommend this to someone who just wants to watch a good comedy with no real drama in sight.

Writers note: There is a gag part after every episodes ending song called High school girls are funky which is also pretty fun to watch.