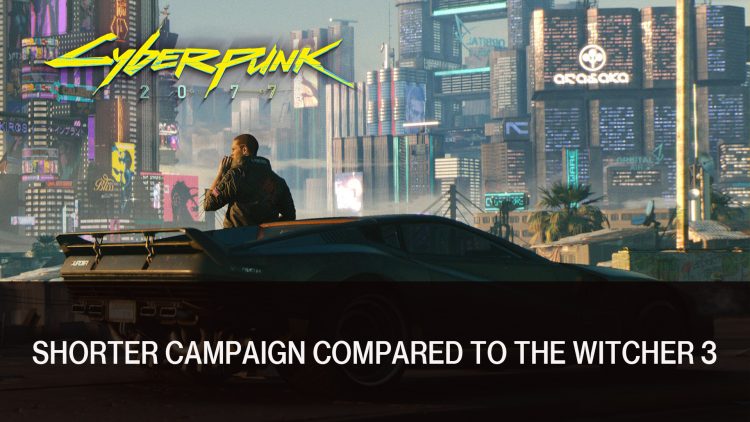 CD Projekt Red have shared that Cyberpunk 2077 will have a slightly shorter campaign than The Witcher 3, as many players did not finish it.

A post spotted recently by ResetEra User Saucycarpdog (during CohhCarnage’s stream) shares that Cyberpunk 2077 will be a shorter game by comparison to CD Projekt Red’s previous RPG The Witcher 3. The statement made by  Patrick K. Milles was shown during the Night City Wire episode that the developer has been releasing to share new details about the upcoming game.

The statement explains why  Cyberpunk 2077 will have a shorter campaign than the Witcher 3, mainly due to the fact that many players simply didn’t finish the main story due to how long is was.

The difference between a completionist run and a main story run… we do know that the main story run in Cyberpunk 2077 is slightly shorter than The Witcher 3 because we got a lot of complaints about Witcher 3’s main story just being too long. Looking at the metrics, you see tremendous numbers of people played through that game really far, but never made it to the end. We want you to see the full story, so we did shorten the main story, but we have lots to do, and in terms of a completionist campaign, I just don’t have that number.

This can be argued though, it really depends on the type of player you are. Some will want to explore every nook and cranny of a game to gain that 100% completionist rate, while others may want to take a more casual or laidback approach. It seems due to this feedback from fans, CD Projekt Red have decided a shorter campaign would go over better.

A shorter campaign doesn’t necessarily sound too bad to me, however I hope this means they don’t skimp on the side-quests and still offer those dedicated players something more to enjoy. There will be multiple endings though, so a number of playthroughs could be in order depending on the requirements to reach those endings.

In recent news CD Projekt Red have reminded fans that the game will also be coming to Playstation 5 on November 19th, which is close to the initial console release date (for select regions).

With the recent reveal of next-generation Xbox and PlayStation consoles’ launch dates we wanted to remind everyone that #Cyberpunk2077 will be playable on those systems on November 19th. Almost like a launch title, right?? https://t.co/PwFksw6MT2

What do you think about a shorter campaign compared to The Witcher 3? Let us know in the comments below.

Cyberpunk 2077 will release on November 19th on PC, Playstation 4, Xbox One, Playstation 5 and Xbox Series X.

For more news be sure to check out next Elder Scrolls Online The Dark Heart Of Skyrim Year-End Preview and PS Plus Subscribers Can Access PS4 Classics On PS5 On Launch Day.