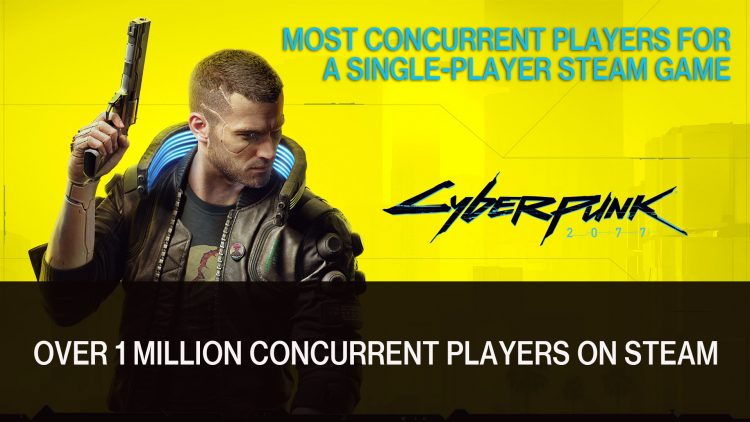 Cyberpunk 2077 Hits Over A Million Concurrent Players on Steam

Previously Fallout 4 had held the most concurrent players for a single-player game on Steam with 472,962 when the open-world title launched in 2015. Now Cyberpunk 2077 has taken that spot with surpassing over a million concurrent players, peaking at 1,003,264 players according to SteamDB

Cyberpunk 2077 the action-RPG is of course on a few different platforms for PC, including GOG, Epic, GeForce Now and Stadia, as well as consoles. While Cyberpunk doesn’t take the all time most concurrent players for any game, which is currently held by PUBG which managed over three million in January 2018, it does surpass Terraria’s peak of 489,886.

Cyberpunk 2077 had a bit of bumpy start, as when the game went live on Steam the day 1 patch was made available and of course as everyone was eager to play as soon as possible, a bottle neck happened for Steam servers (we were there!) But fourth place is not too shabby for most concurrent players.

Recently Cyberpunk 2077 developer CD Projekt Red had a secret message hidden in its launch trailer, which of course didn’t stay hidden for long, announcing that there would be a free DLC coming next year for the game.

In case you missed it, you can check out the launch trailer below:

Cyberpunk 2077 is out now for PC, Stadia, GeForce Now, Playstation 4, Playstation 5, Xbox One and Xbox Series X. Don’t forget to drop by our Fextralife Twitch channel as we are playing through the game live on stream.