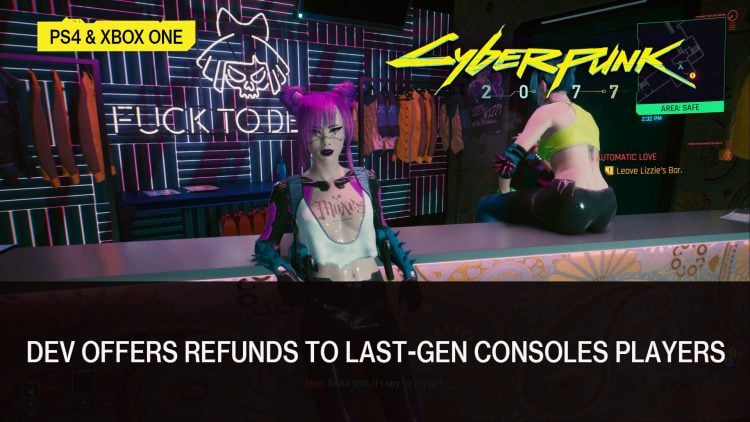 Developer Cyberpunk 2077 has issued a statement on Twitter apologising, sharing that any PS4 and Xbox One players who were unhappy with the current state of the game, can apply for a refund if they are not willing to wait for fixes.

Cyberpunk 2077 released on a variety of platforms on December 10th this month, including previous generation consoles Playstation 4 and Xbox One. While the game had been delayed a few times, the last time due to needing more time to get the game ready for all console versions plus PC, it was released all on the same launch day.

However, there was feedback from many who had purchased the game on PS4 and Xbox One consoles who came across numerous bugs and crashes. Due to this reason, CD Projekt Red have been diligently releasing patches to help get rid of the bugs and performance issues, but have also issued a statement today, saying that if players were not happy with their overall experience of the game so far, can apply for refunds through PSN or Xbox. For physical box editions, refunds will be issued from the store you bought it from, however if that is not possible you can contact CD Projekt Red directly.

The statement assures they will continue to have more updates frequently with the next one being in the next 7 days. Further updates will be implemented after the holidays, with two large patches, the first releasing in January, and the second in February. These patches are to address the issues players are facing on last-gen consoles. The developer shares also that the patches “won’t make the game on last-gen look like it’s running on a high-spec PC or next-gen console, but it will be closer to that experience that it is now”.

While this post focuses on the issues facing last-gen consoles, the message at the end also assures that PC players will also be receiving regular updates and fixes.

We’ve also released our overall review on the game, if you’re curious to find out what we thought of the game, check out our Cyberpunk 2077 Review: The Final Verdict.

For more news find it here in Amazon’s Lord Of The Rings MMO Launch Expected In 2022 and Granblue Fantasy: Relink Resurfaces With 2022 Release Window For PS4 And PS5.