In this Cyberpunk 2077 Build Guide I’ll be showing you my Cold Blooded Gunslinger Build that does incredible damage with Revolvers to absolutely destroy enemies, even on the hardest difficulties of the game. If you’re a Night City citizen with Big Number Syndrome then you’ll want to check out this Build because you get some absolutely huge Crit numbers with it!

The Cold Blooded Gunslinger Build uses Power Revolvers to great effect because they deal incredible per shot damage, and can often outright kill enemies with a single round if you hit the target in the head or weakpoint. This is because they have a 2x headshot damage multiplier, which is higher than just about every other weapon out there.

When you combine the deadly fire power of the Revolver with Cold Blood you become an unstoppable force that just wades its way through enemies with ease. You’ll gain things like increased Armor, Crit Chance, Crit Damage, health regen and of course even more Headshot Damage! The more you kill the better you become, until you transform into Johnny Silverhand himself. 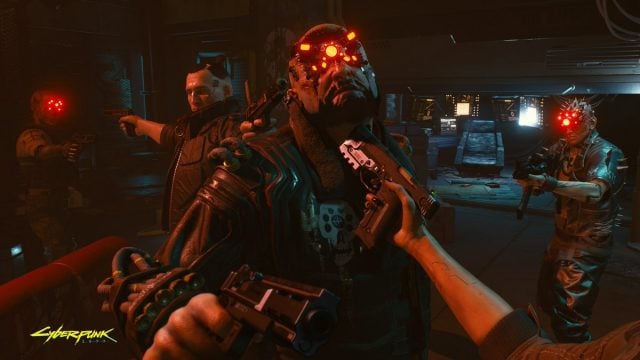 Your Attribute spread should look something like this eventually:

You need significant Attribute investment into Cold Blood in order to get some of the best Perks, as they aren’t available until around 9 Attribute Points, and they just keep getting better from there. Because of this is, you should priority Reflexes first or you may feel gimped early on. There are some great Body Perks right away without investing any points, so try to avoid placing Attribute Points here until near end game.

In this section we’ll take a look at what Perks you should acquire in order to get the best performance from this Build. Reflexes is our top priority, since it contains Handguns Perks, we’ll begin there. It’s important to note that in many cases higher level Perks are better than lower level ones, so if you haven’t maxed a lower level Perk out when you unlock a higher level Perk, you might want to come back to it later on.

High Noon – This Perk increases your Crit Chance with Pistols and Revolvers, which further boosts your damage. When your Headshots Crit you do even more damage, which plays to the strength of this Build. Max this one out.

Gunslinger – This Perk is useful because Revolvers can take a long time to reload, and it can get you killed if you are not careful. 10% is not much so I suggest either going all in on this Perk in order to get the maximum benefit, or skipping it all together.

Rio Bravo – What more could you want from this Perk? It increases Headshot damage with Pistols and Revolvers, which again benefits this Build perfectly. Max this one out eventually.

Desperado – This Perk gives you a straight damage increase with Pistols and Revolvers so you will want to max this one eventually, but not immediately since it’s not by a huge amount.

Long Shot Drop Pop – This Perk increases your damage to enemies that are more than 5 meters away, which is fantastic since this will be quite often. Max this one out as soon as you can.

O.K. Coral – This Perk increases your damage vs. low health targets, and while this isn’t particularly useful against normal enemies, it performs very well against Bosses so you’ll want it.

A Fistful of Eurodollars – The Perk further boosts Crit Damage with Pistols and Revolvers, and you can never have enough of that! Max this one out eventually.

Grand Finale – This Perk doubles the damage of the last round in your Pistol or Revolver before you must reload. This is more effective if you’ve maxed out Gunslinger, so I recommend only taking it if you’ve done that one.

Wild West – This Perk removes the damage penalty from firing Pistols and Revolvers at range. You’ll be doing this often so you might as well consider this a damage increase Perk.

Westworld – This Perk increases your Crit Chance with fully modded Pistols and Revolvers, which yours will be. It’s not too difficult to find mods, and practically any will do in order to gain this bonus. You can unslot and slot mods at will, so there is no downside here.

Brainpower – Headshots increase Crit Chance with each one performed. Is there a more perfect Perk for this Build. This one is a no “brainer”…pardon the pun.

The Good, The Bad and The Ugly – This Perk increases your damage and Armor for a short time after a successful Critical Hit. This is perfect for this Build because we focus on high Crit Chance.

Cold Blood – This Perk gives you a buff that lasts 10 seconds when you kill an enemy. It starts out as only a movement speed increase, but as you progress you’ll unlock other benefits as well. Take this one immediately in order to begin gaining experience in this Perk tree since at level 2 you gain a permanent Crit Chance boost.

Will to Survive – This Perk increases your Resistances with each kill. It’s not the greatest of the Perks here, but it will increase your survive ability, which is needed on harder difficulties.

Critical Condition – This Perk increases the duration of your Cold Blood buff. You want this to be as long as you can, so this is a must have Perk for this Build. Max it out as soon as you can.

Rapid Bloodflow – This Perk increases your Health regeneration in and out of combat for each stack of Cold Blood you have. The more healing you can get the better, so you’ll take this one.

Defensive Clotting – Another Perk that will help keep you alive, but this one increases your Armor with each stack of Cold Blood. More Armor equals less death.

Frozen Precision – This Perk just increases your Headshot damage, plain and simple. You can’t have enough Headshot damage with this Build, so take this one.

Cold and Calculating – This Perk gives you a chance of gaining a Cold Blood stack when you Critically Hit. You do lot’s of Critical Hits with this Build so that synergizes nicely.

Coolagulant – This Perk makes you lose only one stack of Cold Blood at a time, further increasing the duration you maintain its buffs. This one can make your buffs last much much longer, so take it.

Regeneration – This Perk makes you regain Health slowly while in combat. Take it as soon as you can in order to gain the most benefit from Rapid Bloodflow.

Invincible – Another Perk that is really all or nothing, adding a modest amount of maximum Health. Either skip this one or max out it out for the most benefit.

Epimorphosis – This Perk allows you to regain your Health outside of combat, which is just handy. If it makes your life easier why not take it to help you out?

Divided Attention – This Perk allows you to reload while sprinting, sliding and vaulting. This saves you time since you can do two things at once, and Revolver reloads are not the fastest. 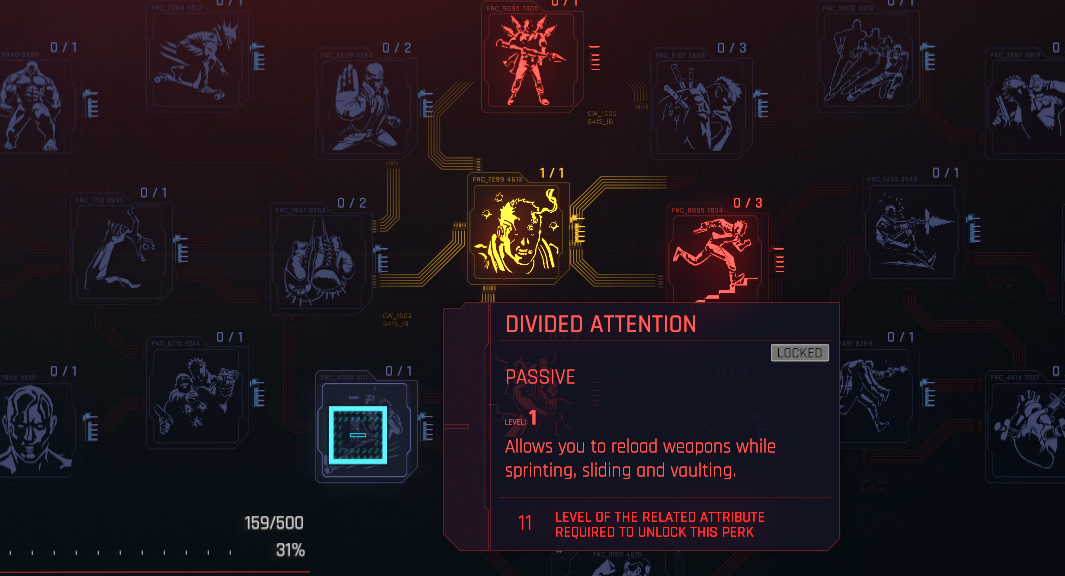 Cardio Cure – This Perk increases your Health regeneration by a modest amount while you are moving. You’ll be moving quite a bit with this Build so every little bit of healing helps!

In this section we’ll take a look at what equipment is needed to play the Cold Blooded Gunslinger Build. We’ll begin with Weapons first since I think they are the most obvious in this case.

Obviously you’ll need a Power Revolver of some kind for this Build, and which one you pick is not of super importance early on just as long as you have one. However, note that DPS can be misleading because you want the highest damage per shot, not the the highest DPS. You want one shot one kill ideally, so rate of fire is less important. Note that bonuses on Weapons are randomized unless they are Iconic, but you’ll want to look for ones that have Crit Chance and Crit Damage if possible for maximum effect. Some even have higher Headshot multipliers… 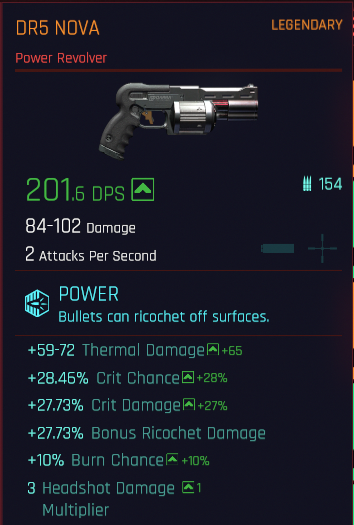 You’ll also want to pick up some Mods for this weapon since it will improve your performance with it, and in some cases damage. It is also important because Westworld will only work if you have a fully modded weapon. Be sure to avoid Mods that reduce your damage, like silencers.

Armor-wise, you want to look for bonuses to Crit Chance or Crit Damage ideally. Having more Armor is of course better, but you will have decent survive ability regardless. If you’re playing on Very Hard though, you might want to prioritize more Armor. Since these bonuses are randomized as well, you’ll just have to keep an eye out. 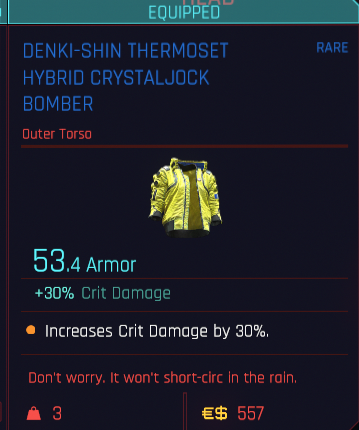 There are some Cyberware that can really benefit this Build and I will cover those here. Trajectory Analysis is probably the single most deadly Cyberware Mod you can get with this Build because it will further boost your Headshot Damage by a whopping 50%. It’s quite expensive though, and will take you some time to get. 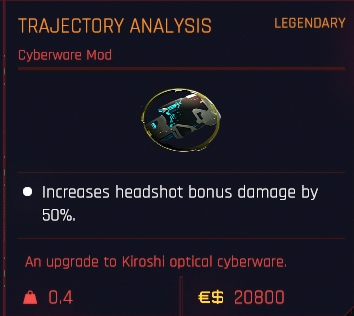 Synaptic Accelerator is another good Cyberware that slows time when you enter combat. This can allow you to kill one enemy or two before they can even move, which is fantastic. Higher quality version slow time more and for longer.

I really like to use cover with this Build because you need to get Headshots to maximize your damage, and Revolvers don’t have a lot of rounds per clip so you can’t afford to waste shots. Cover allows you to aim precisely while minimizing the damage you take. In order to cover simply get near a ledge or doorway and aim and it should do this for you, sort of lean out or whatnot. If it doesn’t do this you will need to move closer, but you’ll get the hang of this fairly quickly.

Always aim for the head if you can in order to go for one shot one kill. You don’t have to hold all your shots for the head, but try not to just pull the trigger as rapidly as you can. Also note that guns in this game seem to fire bullets just left of where you think they will land, so learn to aim just a hair to the left of the head. 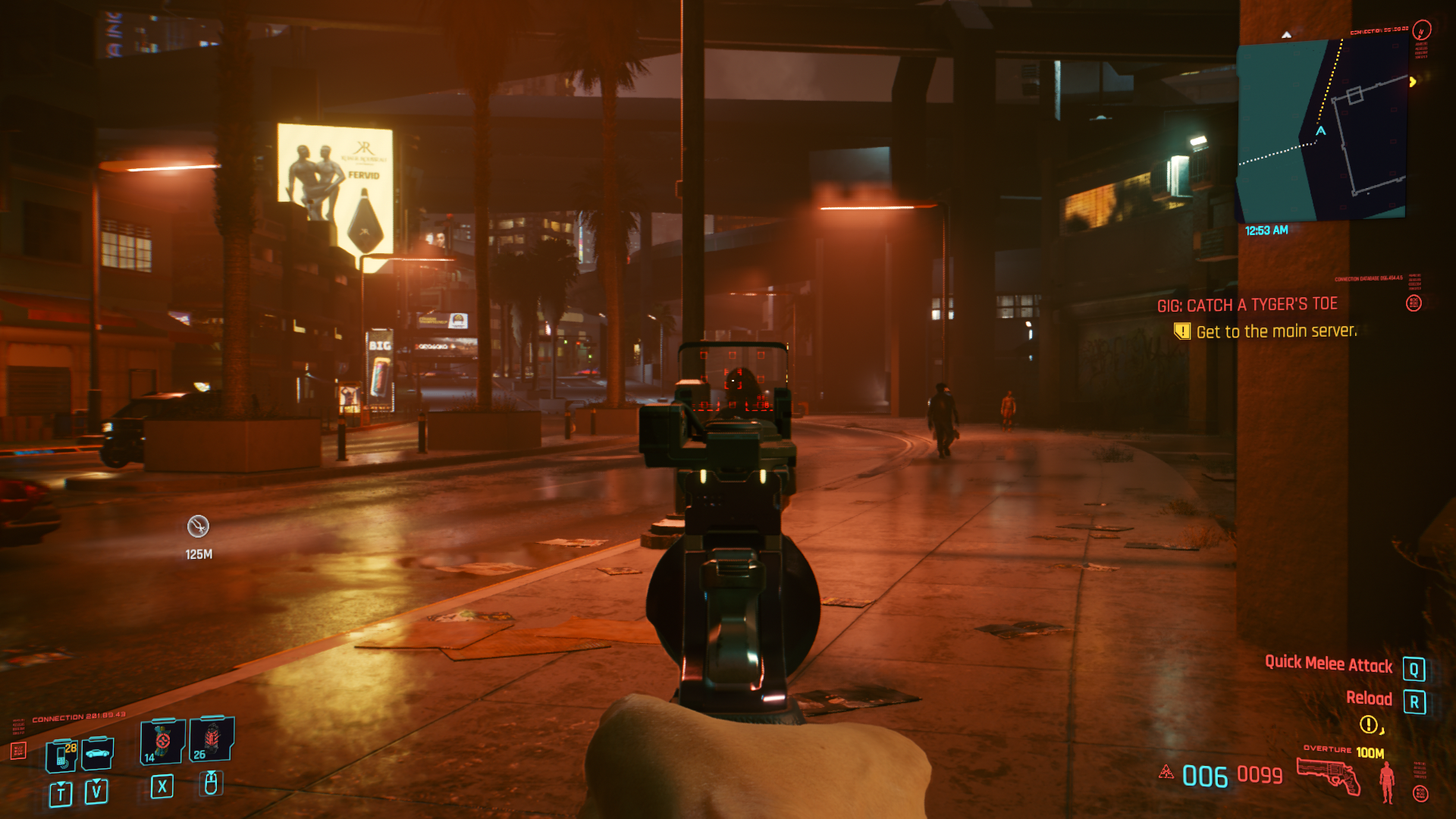 Damage drops off with Revolvers the further you are from the target so make sure you are close enough to deal good damage. Run and get into cover closer up if you need to. You’ll have excellent movement speed due to your high Reflexes so this shouldn’t be an issue.

If you find a Revolver that you really like or one that just feels really good to you, you can upgrade it using Crafting. You’ll need materials to do this, obviously, but you can get these from scrapping weapons and armor in your inventory for parts. 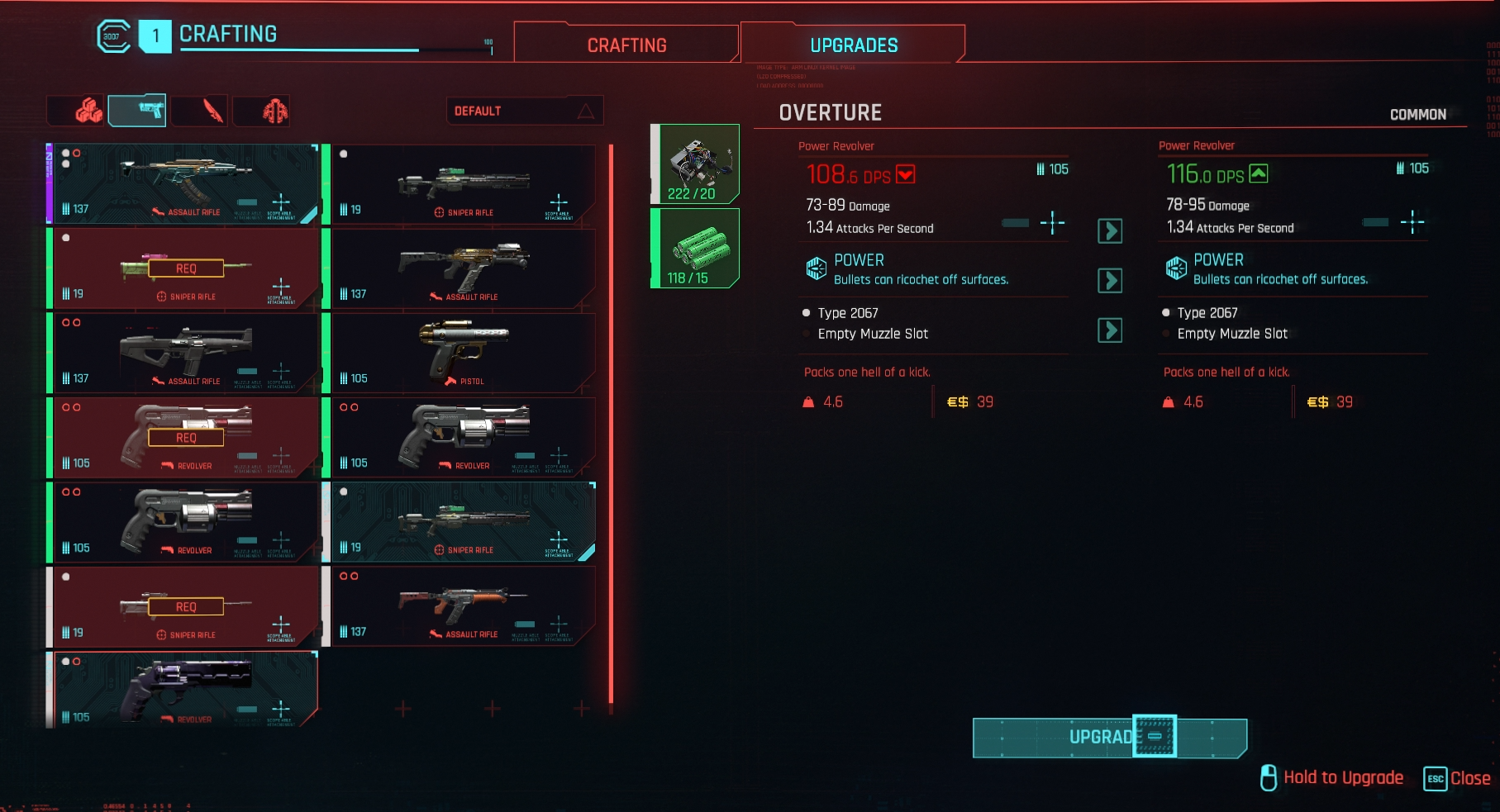 Lastly, remember that you can use Pistols with this Build too, though not designed specifically for them. There are some decent Pistols in the game as well, some deal shock damage which works well against machines, and it never hurts to have a back up weapon. Play around with them and find one that fits your playstyle!