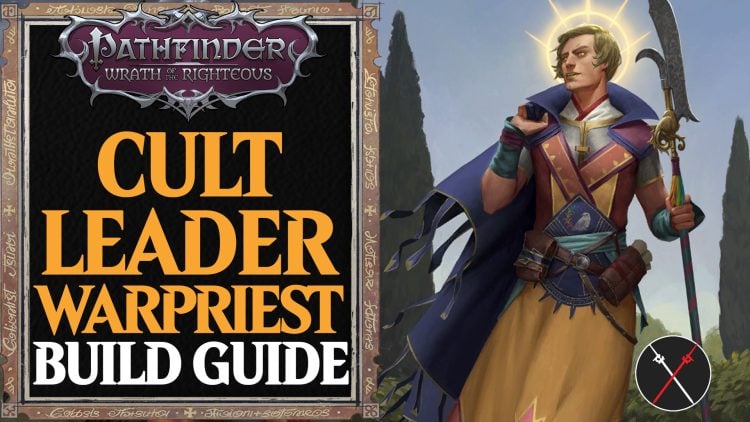 From Levels 1 to 4, we’re going to level up as a Zen Archer Monk to be able to take advantage of the preliminary Monk Abilities we gain. What makes Zen Archers different from Rangers and Hunters is their Flurry of Blows Class Feature as well as the Bonus Feats they get at earlier levels, allowing them to succeed in Combat. With Flurry of Blows, you apply your Strength Bonus to Damage Rolls when wielding Composite Bows, which is your Weapon of choice. It also provides you with an extra attack at Level 1. 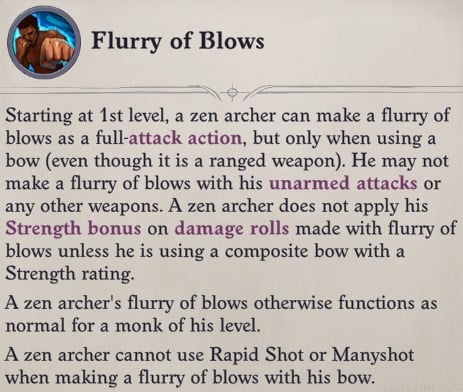 Next, you can get these four Zen Archer Monk Bonus Feats:

Perfect Strike works like D&D 5th Edition’s Advantage such that you can roll for attacks twice and take the greater value to improve your chances of hitting targets. Meanwhile, the next three Feats sufficiently enhance your attacks and damage. One thing to remember with Weapon Focus is that you must be certain of the type of Bow you’ll wield whether it’s a Shortbow or Longbow to stack up on as many Attack Roll Bonuses as possible using the same Weapon. As long as the Bow you choose is Composite in nature, you can get an additional Damage Bonus from your Strength Modifier.

The reason why we want to level up our Zen Archer to Level 4 is to get a few essential Ki Powers in the form of Extra Attack and Barkskin. Both of them use Ki Pool Points, which are derived from ½ of your Monk Level + Wisdom Modifier. Extra Attack, as the name implies, grants you an additional attack per turn. Barkskin, on the other hand, is a defensive stat that boosts your Armor Class (AC) or how well you evade attacks due to the Natural Armor Bonus you receive.

However, when your level increases and you happen to purchase the Amulet of Natural Armor +3 in Drezen, you can opt to equip this instead. The Amulet gives a higher bonus to AC instead of Barkskin since you won’t level up your Monk Class as much.

From Levels 4 to 20, we’ll be multiclassing with the Cult Leader Warpriest, which is the highlight of this Build. What makes the Cult Leader special is its Warpriest Abilities that not only grants Weapon and Armor Enhancement Bonuses but it also provides Sneak Attacks for extra damage as well as Divine Spells. At earlier levels, you gain Positive Energy Fervor, Blessings, and Light Armor Proficiency.

Positive Energy Fervor allows you to heal yourself or an ally several times per day. Personally casting this lets you use it as a Swift Action, which can help you survive better in tough encounters. The amount of HP restored is also based on your Wisdom Modifier that’s high by default. In terms of Blessings, you’re able to choose two Abilities to deal extra damage against creatures with different Alignments. For this, I highly recommend taking Holy Strike and Axiomatic Strike, which are effective against the most popular types of targets, namely, Evil and Chaotic, respectively. 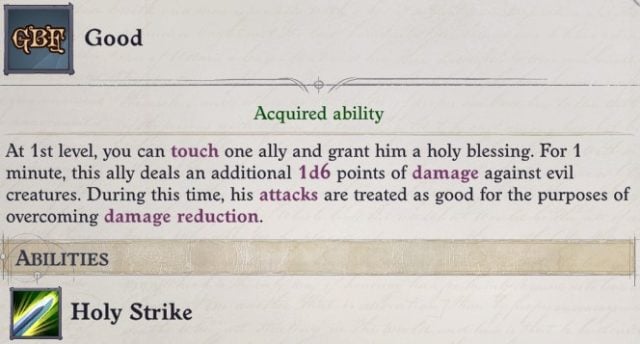 Next, due to your Armor Proficiency, you lose the Wisdom AC Bonus you initially gain from being a Monk. This is countered by equipping a decent Light Armor and activating the Sacred Armor Ability. Sacred Armor lets you stack Armor Bonuses and grants you Energy and Spell Resistances, thereby boosting your defenses against Spellcasters like Cultists. 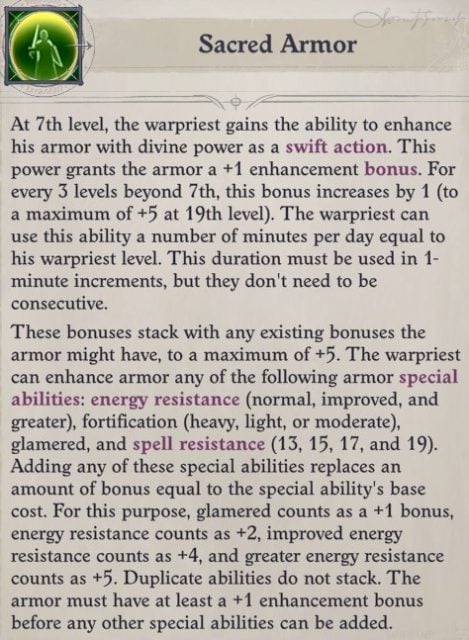 But these aren’t the only Abilities that Cult Leaders have. They can also perform Sneak Attacks together with Sacred Weapon and select a Bonus Combat Feat. With Sneak Attacks, they’re able to deal as much as 5d6 Precision Damage against flanked enemies. And when you get the Accomplished Sneak Attacker Feat, you even raise the damage to 6d6. You can easily trigger this prior to the start of an encounter by surprising flat-footed targets. 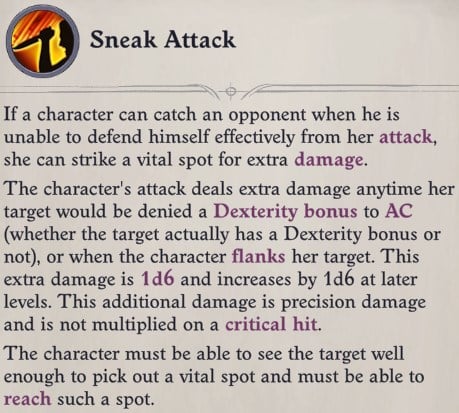 Sacred Weapon, on the other hand, buffs the attacks and damage of your Weapon, which now relies on your level. Furthermore, changing the property of your Bow to adjust to your foe’s Alignment is possible, letting you inflict an additional 2d6 worth of damage. All in all, you’ll be dealing massive damage via regular Ranged Attacks, Sneak Attacks, and Sacred Weapon! 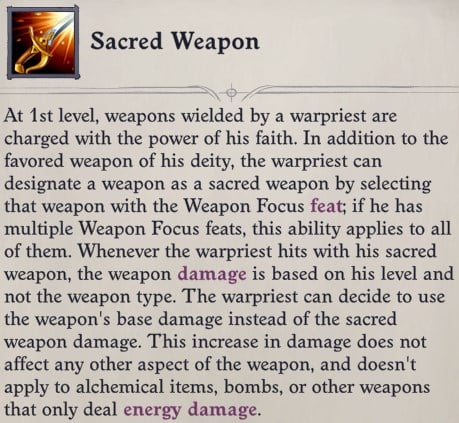 Lastly, at Warpriest Level 6, you gain access to one Bonus Combat Feat. For this one, I suggest taking Improved Critical to increase the chances of pulling off Critical Hits, thereby raising damage even more.

The best Race for this Cult Leader Warpriest Build is the Aasimar because it allows you to choose the Plumekith (Garuda-Blooded) Heritage. This provides you with bonuses to Dexterity and Wisdom, which are some of the primary Attributes of your character together with Mobility. In terms of the Background, you can choose anything that fits your playstyle. 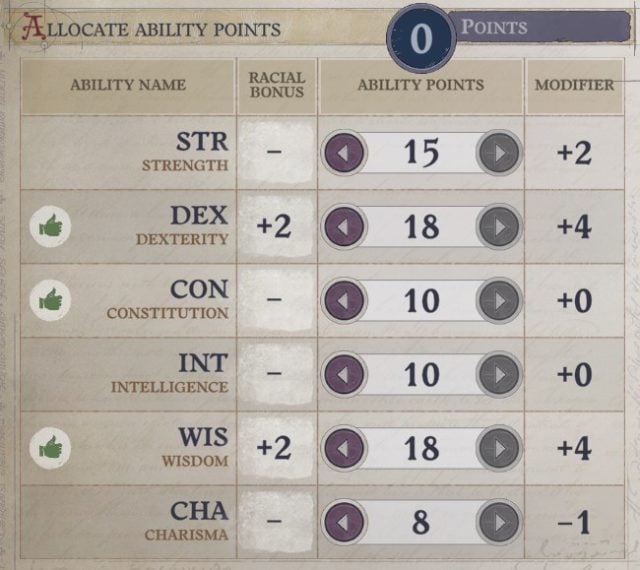 Starting at Level 4 and after every four levels, you’ll be able to add 1 point to any of your Attributes. For this Build, you’ll raise Strength and Wisdom similar to the Faith Hunter Inquisitor Build. Strength boosts the damage you inflict with your Composite Bow whereas Wisdom enhances your Attack Rolls to hit as often as possible. It’s also the Warpriest’s Spellcasting Ability, which determines how well you learn and cast Spells. Moreover, Wisdom negates or reduces the negative impacts of Spells that make you roll for Will Saves. 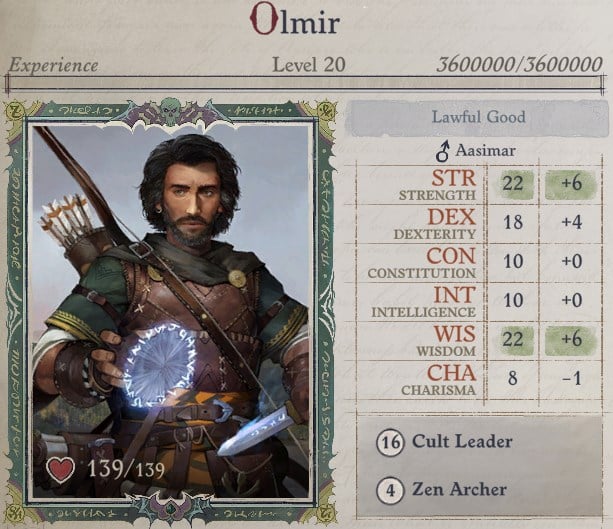 At Levels 4, 8 and 12, you’ll allocate points into Strength to raise it to 18 with a modifier of +4. Conversely, you’ll want to reach 20 Wisdom by the time you reach Level 20. You can further enhance this Attribute by personally casting Owl’s Wisdom. 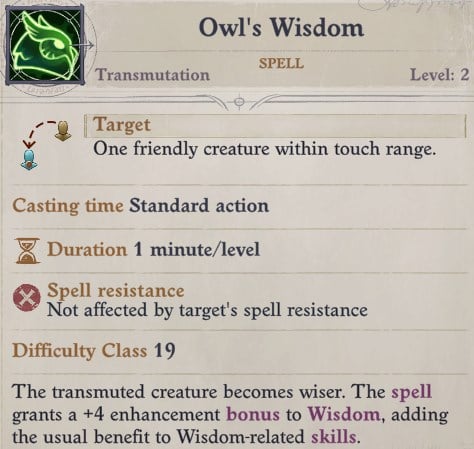 For Skills, it’s good to invest in Mobility, Stealth, and Perception due to the bonuses you initially receive with these. Mobility and Stealth allow you to pass enemies undetected in order to avoid provoking Attacks of Opportunity. Additionally, Stealth aids you to successfully perform more Surprise Attacks in preparation for triggering Sneak Attacks to deal greater damage. 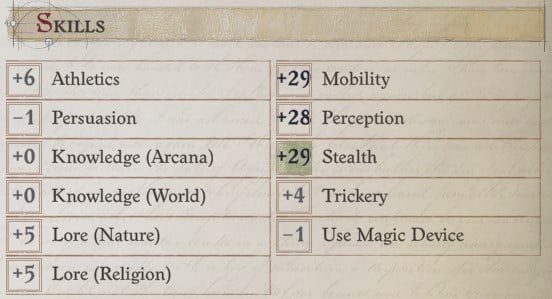 And finally, Perception makes you attuned to your surroundings to easily notice obscure traps and objects. It also lowers your chances of getting surprised by enemies when resting at camp.

From Levels 1 to 19, you’ll be able to choose 10 Regular Feats for your Zealous Warpriest with 1 Feat at every other level. You’ll focus on improving initiative while boosting your Attack and Damage Rolls. 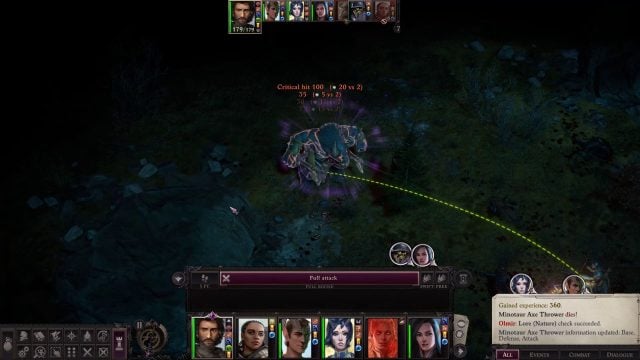 What’s great about the Warpriest is it also grants you special Feats without having to dip a couple of levels into the Fighter Class. These include Greater Weapon Focus, Greater Weapon Specialization, and Penetrating Strike. All of them are fantastic in ensuring that you hit enemies hard with your Composite Bows because of the Attack and Damage Roll Bonuses you get, as well as the Damage Reduction (DR) points you ignore.

Additionally, you should select Support Feats like Improved Initiative and Warrior Priest to increase your chances of going first in combat in order to further utilize your Sneak Attacks. This way, you gain the upper hand by quickly eliminating targets before they can even hit you. Moreover, Warrior Priest is decent because it also provides Concentration Check Bonuses, which you need to be able to cast Spells without interruption, even if for example, you become susceptible to Attacks of Opportunity.

Cult Leaders are pretty much like Wizards in that you’ll need to prepare Spells prior to resting before you can use them. For this Build, you’ll be focusing on casting Divine Spells. In addition to dealing high amounts of damage, you’re able to effectively heal and buff the entire party especially if you don’t have pure support allies with you. The best buffs you ought to get are Bless, Shield of Faith, Bear’s Endurance, Owl’s Wisdom, Blessing of Courage and Life, Protection from Alignment, Communal, Magical Vestment, Resist Energy, Communal, and Divine Power. 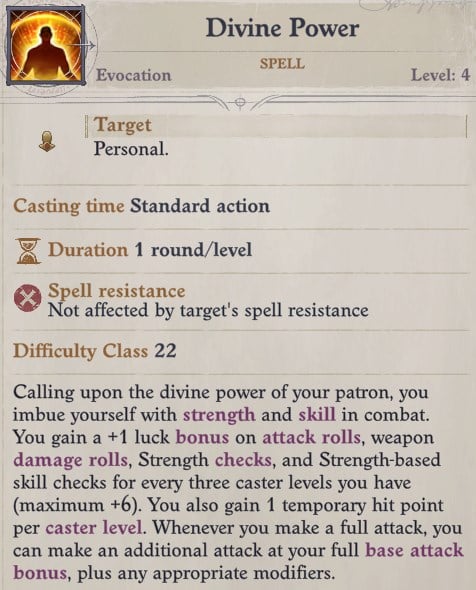 Bear’s Endurance is highly significant because it buffs your Constitution, which you need to increase your max HP. The Communal versions of Protection from Alignment and Resist Energy are must-haves to protect your allies as well. You won’t be able to lend your Sacred Armor Abilities to them so these Spells are a decent compromise. Meanwhile, Divine Power is an incredible buff that provides you with another attack per turn.

Even if you already have Positive Energy Fervor to heal injured partymates, you can still opt to acquire Cure Wounds, Mass Spells to restore their HP all at once. Alternatively, you have the ability to select other Levels 1 to 6 Support Spells such as Remove Sickness, Stunning Barrier, Delay Poison, Dispel Magic, Restoration, and True Seeing, to name a few. I’d refrain from taking Damage Spells since we won’t specialize in these anyway. Otherwise, you’ll just spread yourself thin, which would be to your disadvantage. 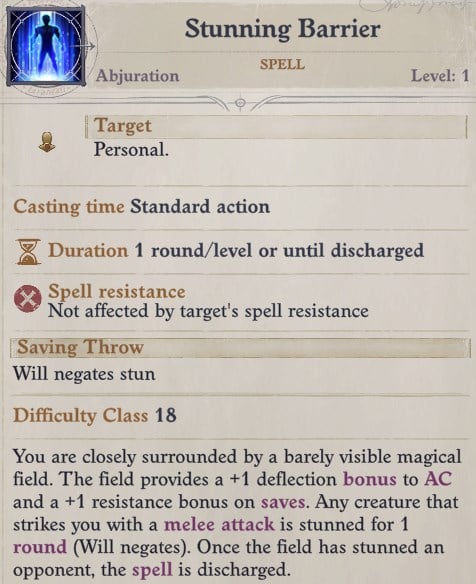 For this Build, you can choose any Mythic Path depending on your roleplaying preference. You should, however, pick these 10 Mythic Abilities and Feats to enhance your Ranged Attacks and Spellcasting capabilities:

For starters, you’ll want to take advantage of missed attacks by stacking them to eventually hit enemies with Ranging Shots. Since you only unlock Levels 1 to 6 Spells, Abundant Casting and Improved Abundant Casting are enough to increase the number of your Spell Slots. Finally, Expose Vulnerability lets you deal additional Divine Damage based on your Mythic Rank so the higher the rank, the greater this extra damage will be.

These Feats improve your Attack and Damage Rolls and grant you additional 1d6 Precision Damage for Sneak Attacks.

When it comes to your Zealous Warpriest’s Weapon, it’s best to equip a Composite Shortbow or Longbow depending on your preference. For the Shortbow, you can go with Hunter’s Assurance or Holy Speed Composite Shortbow +3 while for the Longbow, Entrapping Longbow or Composite Longbow +2 would be good. To improve your defenses, you’ll be wearing the Mithral Chainshirt Light Armor, Cloak of Resistance, and Amulet of Natural Armor. The AC Bonus provided by the Ring of Protection doesn’t stack with Shield of Faith’s bonus so I opted to personally cast the Spell instead. 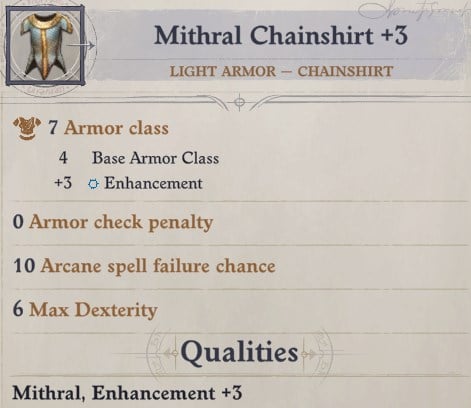 The Cult Leader Warpriest Build delivers great damage from Sneak Attacks, Critical Hits, Ranged Attacks, and Sacred Weapon. You can even cast Divine Spells to fully support your allies while boosting your defenses, attacks and damage, making this Build highly versatile and powerful. Similar to Clerics, you’re able to convert any Spell to Cure Wounds should you run out of Healing Spells. You’re also able to use them against the Undead to deal damage. 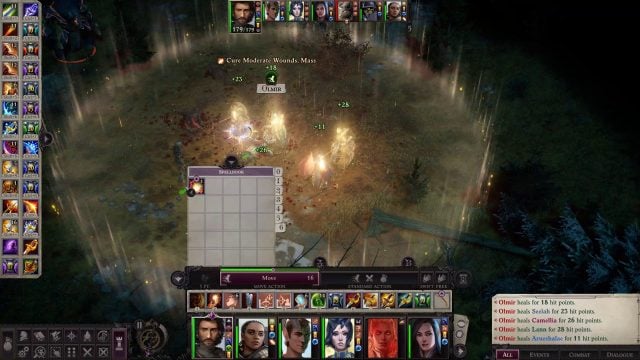 Unless you happen to obtain the Headband of Inspired Wisdom +6, it’s better to keep casting Owl’s Wisdom because it provides a higher Wisdom Bonus compared to lower versions of this headband. You’ll need a ton of Wisdom since the effectiveness of some of your Abilities and Spells rely on this Attribute.

Lastly, remember to activate Ki Power: Extra Attack when you’re about to do a Full Attack, otherwise, you’ll end up wasting it. This contributes to the 7 attacks you can execute per turn, which is huge given the damage you’re able to deal with each of those arrows.

Stay tuned for more Class Build Guides and be sure to check our Twitch Channel or the Pathfinder: Wrath of the Righteous Wiki if you have questions on the game! Be sure to check out our other Pathfinder Wrath of the Righteous Guides like the Zen Archer Monk, Primalist Bloodrager, Faith Hunter Inquisitor, Eldritch Archer Magus,  Bloodrager Class, Arcanist Class, Cavalier Class, Top 5 Archer Builds, Best Class to Play, Delamere, Arueshalae, Greybor, Regill, Sosiel, Woljif, Daeran, Wenduag, Ember, Nenio, Lann, Seelah, Camellia, and Beginner’s Guide!