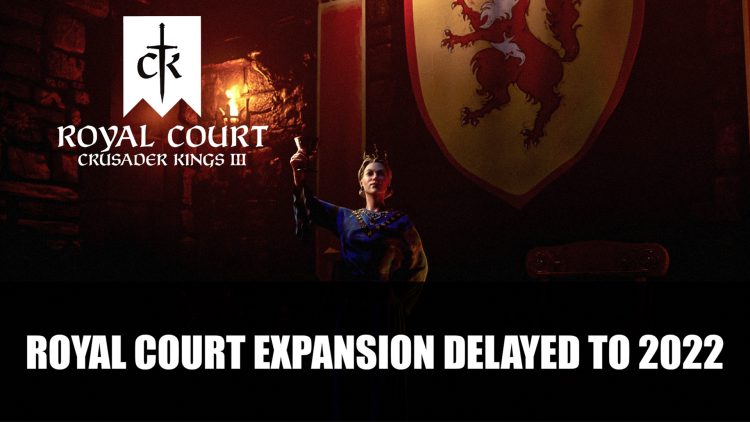 The first major expansion for the strategy role-playing game Crusader Kings III called Royal Court was expected to release sometime this year. While the release date wasn’t officially announced, the expansion was announced at PDXCon in May, shortly after opening preorders on Steam. However, the developer has now announced through its forum it won’t be releasing until 2022.

This year has been a long and interesting one, to be certain, but we are here all together to make sure that our fantastic community gets the product that we have all been waiting for and deserve. Earlier this year, we informed you all that we were working hard to make sure that Royal Court was up to our standards.

Royal Court is not only the first expansion for CK3, but also a set of features entirely new to the CK series, including cultural evolution and language. It is very much breaking new ground,and as such, we are experimenting at every turn.

The post also shares that a release date will be announced “soon” meaning we may not need to wait long for the DLC announcement. The delay is due to a “number of bugs” that need to be fixed and making improvements to best suit the expectation of fans.

The expansion is set to add a new way to interact with the characters that inhabit your kingdom, including major changes to the cultural system of the game as well as adding greater “dynamism and historical fluidity” according to the official Steam page. The Crusader Kings III: Royal Court will include a Throne Room, the ability to Hold Court, Grandeur, Inspired People, Hybrid Cultures, and Cultural Divergence.

In case you missed it you can check out the announcement trailer below:

For more news find it here in Horizon Forbidden West Developers Share New Details On Tools, Weapons And Climbing Mechanics and BlizzConline 2022 On “Pause”; Event To Be Reimagined.