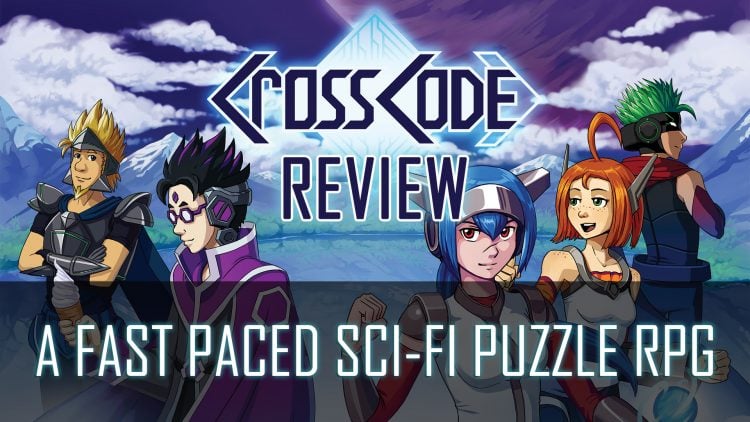 Radical Fish Games’ 2D action-RPG combines two popular genres that fit together in this futuristic title they call CrossCode. Trying to mix puzzles with classic RPG elements could have easily swayed this project into one camp or the other, but it seems the developer have found a way to blend these genres in a fun-filled sci-fi adventure. Drawing inspiration from games like Zelda, CrossCode is a uniquely futuristic journey of their own.

In a world where MMO’s are not only a part of life, but a real place where players can meet through the use of avatars, real life people take control of these avatars and can experience the world through their five senses. The story follows the character called Lea, who has been a part of said world, however she has been brought back through “reanimation.” This causes her to lose her memory, affecting her ability to speak and must re-learn everything by playing “CrossWorlds”. On her path to re-discover who she is, will she uncover her mysterious past and how she fits into this grand design? Players will guide Lea as she navigates the challenging themes of MMORPGs through dungeons, open-world, (and even PvP) in a single-player RPG. 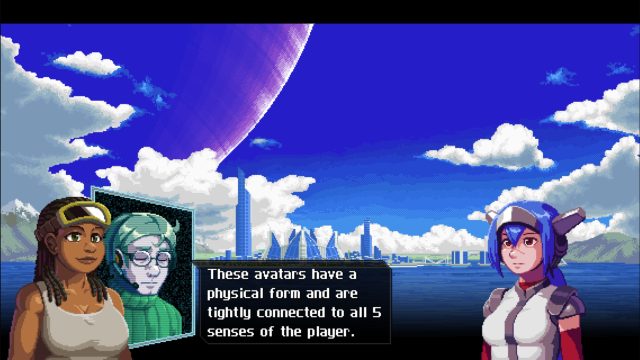 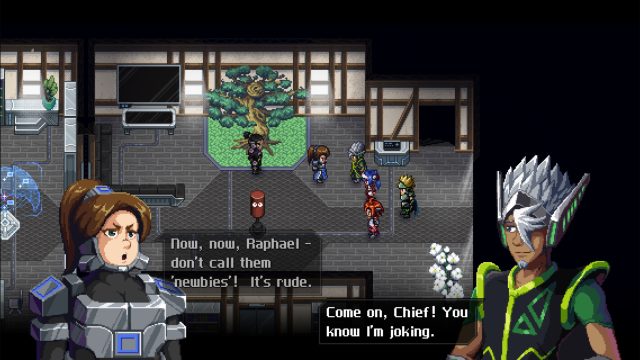 Who you calling a newb?

The dialogue through the CrossCode is lighthearted and comical, making references to the MMO way of life, which feels all too familiar if you play such games as Elder Scrolls Online or Monster Hunter World. You experience dungeons, raids and even join a guild. Out in the world you encounter a number of welcoming, but also some not-so friendly players, who like to challenge or provoke which can even result in simulated PvP battles. 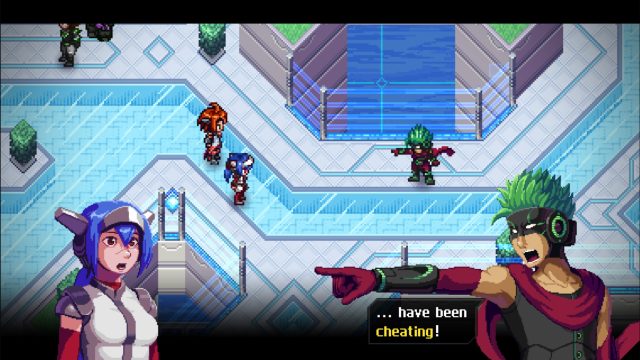 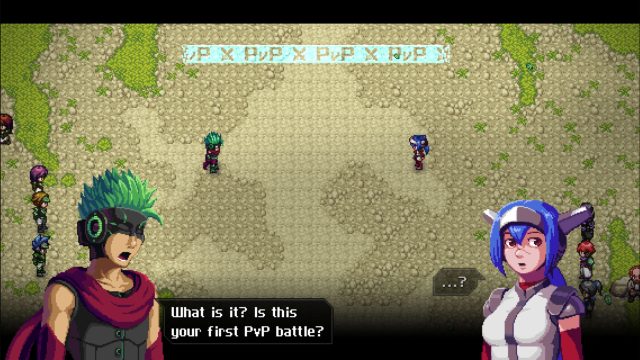 As you discover more areas throughout the world, you can unlock new portals which allows you to fast-travel between different cities. This makes exploring that more enjoyable, as you can efficiently recall to different places as needed.

Adventuring through the CrossWorlds universe will lead you to encounter a number of NPCs that will ask you to complete tasks and in return will reward you with gold and experience. You can keep track of these quests in your menu, and your encyclopedia will be updated with new information every time you find a plant, animal or vendor. Having this system really helps in keeping track of discoveries, as there is a wide range of plants and beasties.

CrossCode is not just about combat, but also solving puzzles, and players will get to test their perseverance when it comes to dungeons. This involves taking the time to figure out how to progress to new rooms or levels by moving blocks, activating levers or even blowing up blocked passages. The developers do a great job of preparing you for this from the very first chapter of the game, and keep a balance between puzzle-solving and combat throughout.

Skill trees are displayed as “circuits”, which is fitting since the main character is similar to an android. Here you use points to increase MaxHP, Attack, Focus and Defense. The type of equipment you choose will also help you to increase basic stat levels in these four areas. 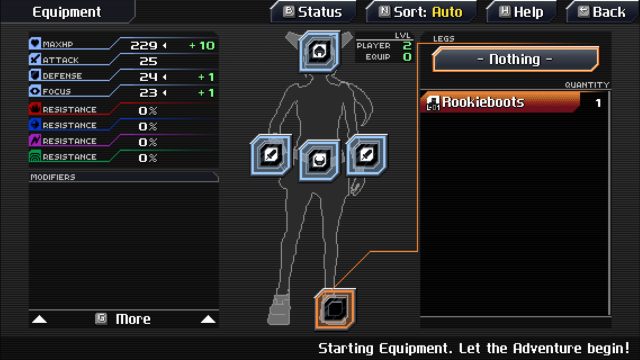 You can decide the type of build you wish to go for, whether it be a brute strength or to choose to level other abilities such as “Spinning Saw” for close range but powerful attacks. Each ability will cost you Circuit Points (CP) and you can respec, but it will cost you some items and currency in order to do so. 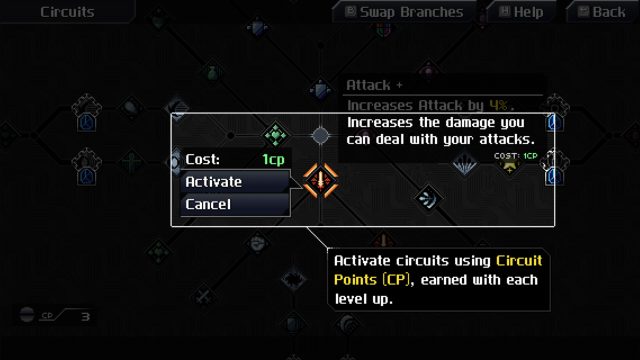 Abilities or “Circuits” can be chosen by using Circuit Points (CP) 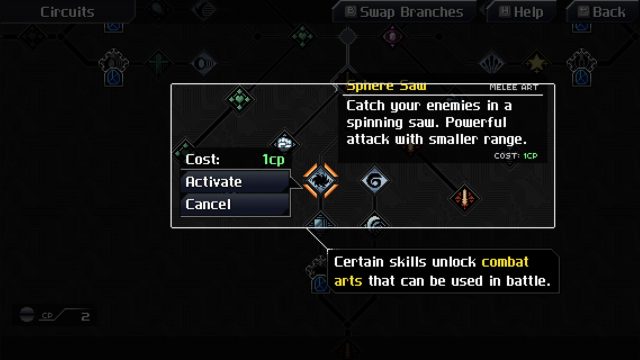 Spending points will grant you increased stats or new abilities

Lea has the ability to aim at targets and charging up power by holding the mouse button and letting go to release ball of energy. Holding for a while  will allow for her to perform a heavy attack and clicking in short bursts for light attacks. Players have a choice of melee combat or range attacks by using the same controls which makes it quite intuitive. Dashing uses a spin action which can help propel Lea forward, useful when you’re in a tight spot and need a quick maneuver. Combat is engaging, responsive and fast paced, so be ready to wear out your mouse as you try to click you enemies to death. You also have the use of special attacks that deal larger amounts of damage, these can be charged by holding down the space button, but can only be used if you have enough SP.

As you enter the CrossWorlds you will be challenged with a number of different levels, each have their own tricks needed to complete them and puzzles that will need solving before you can commence to the next area. Bosses have a range of different move sets and you can even activate floor panels to deflect attacks or distract the boss. Each stage of boss levels gets more and more difficult as you progress, upping the challenges you face. 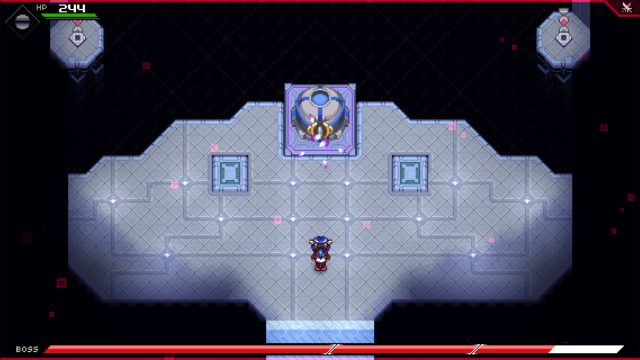 Once players reach the “open-world”, combat is similar to that of an MMORPG, you will come face to face with animals which you can fight and loot materials from. You will also see other NPCs running around giving the feeling you’re playing a multiplayer game online. When you’re resting and out of battle, your health will regenerate just as it would in an MMO. Players will also get teamed up with a feisty CrossWorlds player who hasn’t clocked on to your amnesia secret, and thinks your voice module is just glitched. They will assist you in a companion character role as you take on more challenging beasts, and follow you as you explore more of the world. You can even choose their attack style, whether you prefer them to be on the offense, defense, target a wide range of enemies or follow you lead.

Players are given a rating for combat, in order to climb the ranks they must fight enemies one after the other without hitting “tab” which puts them in rest mode and regenerates HP. If a player can battle a string of enemies one after the other they can increase their grade, however this is quite difficult, as you need to keep an eye on your health or you could lose altogether. High risk gives high rewards as getting an “A” grade for combat gives you more XP in the process and levels you faster. 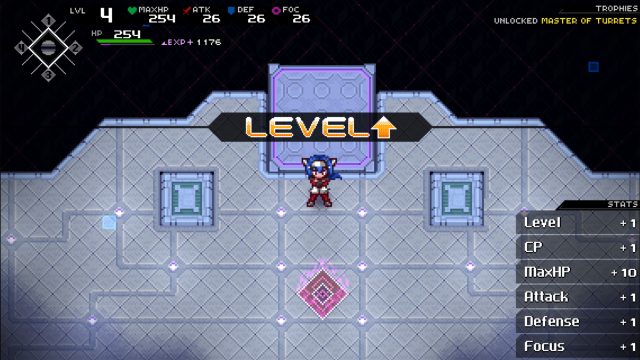 As players gain more items to trade or gold, they can purchasing higher level gear or food from merchants. This is key for going up against the higher level beasts that inhabit the CrossWorld, and improving armor stats or using buffs can help you stay alive. I noticed a substantial difference from the weapon given during the tutorial stage, compared to the one that I purchased from a vendor, so taking the time to gather needed items for upgrades is well worth it. 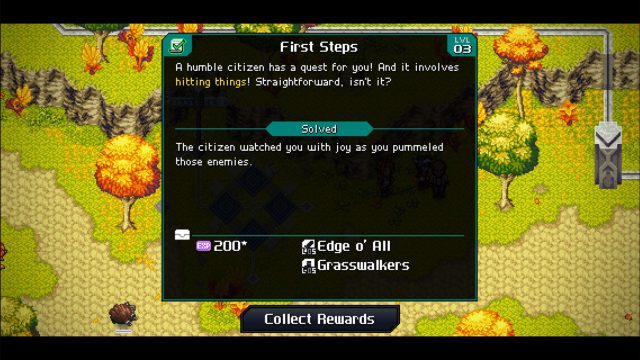 There is a bit of a grind in order to save enough gold, but you can farm for items to sell or do quests in order to upgrade your weaponry/armor. Weapons that are offered are melee based, but since you have your abilities for range combat, you have the best of both worlds. 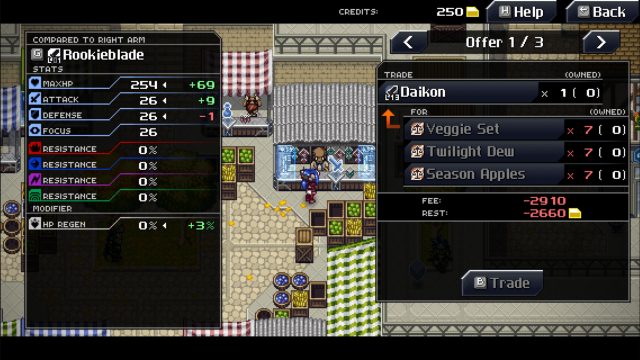 CrossCode has an 8-bit soundtrack that is reminiscent of SNES games, complementing the overall retro aesthetic. Visuals are similar to that of games such as Death’s Gambit or Dead Cell‘s but with a light isometric Stardew Valley feel, set in a futuristic environment. It’s quite amazing what the developers can do with pixel graphics and it is all a part of the game’s charm. Lea runs through the game in Naruto style flailing her arms behind her, complete with Dragon Ball Z-esque energy ball abilities the game feels familiar with it’s anime influence and makes visual effects much fun to watch.

Although characters are not played by voice actors in this title, a melodic tune is played as they talk which reminds me of games such as Don’t Starve Together but without the incessant nonsensical instrumentals. Characters are surprisingly expressive even in pixel 2D form, it really add’s to the feel and mood of different scenes in the story. 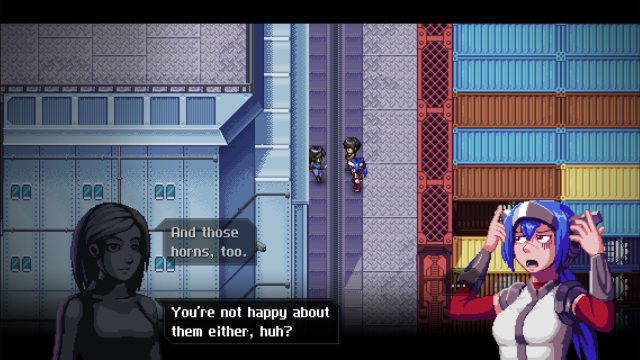 When you start to question your transmog

As you travel from level to level, you’re transported as if “beamed up”, and the animation adds to the sci-fi feel of the game. The environments vary widely depending on where you are exploring, and you can find grassy plains or rocky mountains that both serve as stunning visuals and as puzzles. In order to progress the map you will spend time exploring different ways that can lead to higher terrain.

While this is a single-player RPG, you get a definite feel of something much bigger, as you explore this open-world game set in a MMO theme. The grind of leveling becomes all too real as you fight your way through different beasts to gain those coveted items to complete quests. Progression can be a little off putting if you’re someone who does not enjoy the grind, but those who persevere will feel a sense of accomplishment as you gain rewards and help Lea gain back her words. It’s funny how learning a new word feels just as important as gaining a new ability, or leveling up, as you really want to start to see Lea form sentences and be able to communicate with the players she meets. 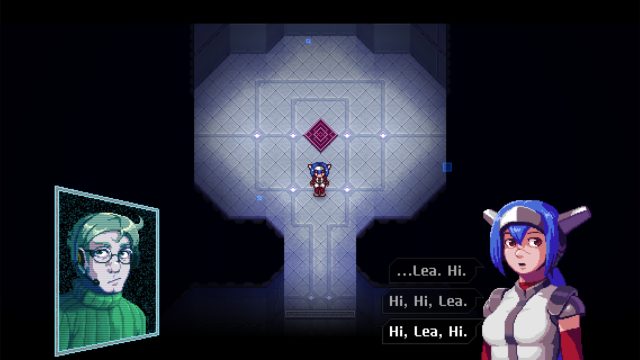 Will Lea ever get to hold a full conversation?

It’s obvious to see that Radical Fish Games have taken the time to create the effect of a mini-universe in CrossCode, adding little details such as wandering players that are actually NPCs, which makes you feel as if you are playing online. Exploring through different terrain keeps the game interesting, but be prepared to face a maze of routes and at times determining the height of terrain in 2D can be a bit of a challenge. 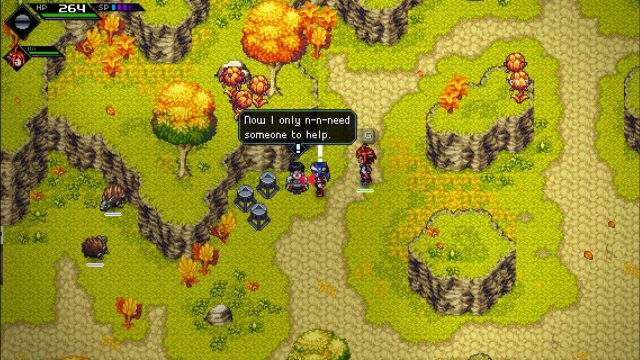 Terrain becomes a challenge as you navigate the world

This action-RPG is expansive, there are numerous hidden secrets throughout the game and will take you a number of hours to find. The game is very cleverly put together, from fluid combat to story progression. If you’re someone who loves exploring worlds, fast-paced energy-ball action, challenging puzzles and a compelling narratives that will keep you captivated for hours, then this could be your next RPG. Be prepared to reserve a chuck of time for this game, as once you start it’s very hard to put down.

CrossCode has now left early access on September 20th on Steam, so you can now get your hands on this game.

If you enjoyed reading this review be sure to check out some more our game reviews in Beast Of Winter Pillars Of Eternity 2 Deadfire Review – Dimensional Contingency and Vampyr Review – Taking A Bite Out Of The RPG Genre. You can also read some our previews for upcoming releases in The Surge 2 Preview: Stronger, Faster, Character Creation! and Knights Of Light Pre-Alpha Preview – A Middle East Medieval RPG.

8.1
Summary: If you're someone who loves exploring worlds, fast-paced energy-ball action, challenging puzzles and a compelling narratives that will keep you captivated for hours, then this could be your next RPG.
Story & Setting (9)
Gameplay (8)
Audio/Visuals (7.5)
Price Point (8)
Replayability (8)