Control puts you in an evolving experience, full of fast-paced action and spy-like intrigue as you discover the secrets of the Bureau. Picking up this action-adventure, I dived head first into a world where nothing is what it seems, trying to figure out what’s going on, while honing telekinetic abilities. Be prepared to throw everything in this game, table, desks, chairs, you name it, I threw it. So without further ado, let’s get into this Control review.

The story follows a secretive agency in New York that is under threat from supernatural influences. Playing as Jesse Faden, you take up the role as the new Director, and it’s up to you to straighten out the situation while battling with your own inner demons. On a journey to find answers, she will meet agents from the Bureau and discover its inner workings, including odd experiments and enigmas. 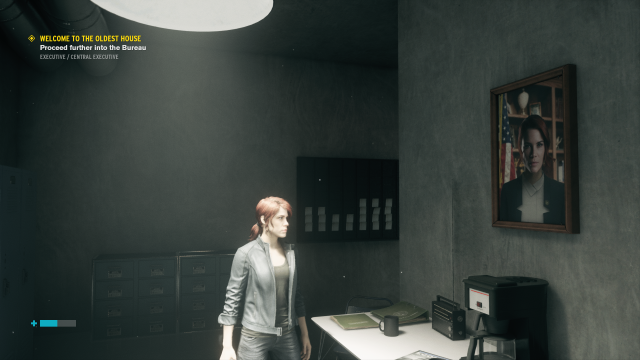 The way the story is told in Control is in bits and pieces. You learn more about what is happening with these strange supernatural beings known as the Hiss, the Bureau and the characters from a number of different ways, a sort of interactive movie in some places. You can also find out more through picking up collectibles that shed light on what has happened. Bit by bit you get pulled in, trying to take Control…

Navigating through a complex that is full of otherworldly beings definitely gets your heart racing, as turning each corner leads to new challenges and even stranger encounters. As you do your best to explore the Bureau, you will find things aren’t always as straight forward as they appear, as it can involve puzzle solving or simply finding a way through a labyrinth of areas. 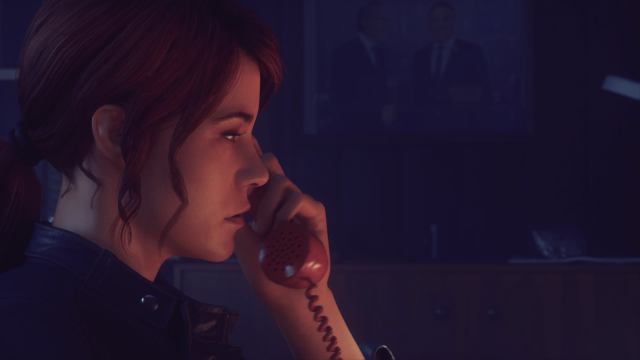 Making your way through the main story you will unlock different sectors, which will set you on new missions or quests to complete. These can come from meeting characters or even picking up some from a friendly janitor called Ahti, who appears to know more than what he’s letting on. This way of progressing feels very open, it’s up to you to decide where to venture next which is really refreshing. This gives a wider range of freedom to explore, but without the sense of feeling lost of what to do next, it’s very cohesive. The main story does push you through more of a fixed path, but it’s nice to have options to go discover other secrets if you want to. 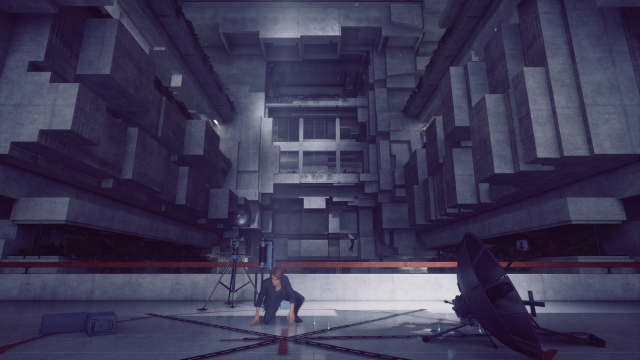 Each area has a fast travel point which can be claimed by cleansing the area. This makes travelling much easier, as you discover new sections, the map just keeps growing, with multiple floors, so this eases exploring and I was glad that this was included in the game. There’s nothing quite like Control, you start off confused, not knowing what is really going on. Looking at my notes while I was playing I have “wtf” written, as there were definitely moments which keep you on your toes. It has some real Resident Evil “he’s going to get you” kind of terror, with the added pressure to solve what is going on in that moment.

Combat is a mixture of a third-person shooter with telekinetic powers, meaning you can use an array of abilities to take out enemies. Lift up objects and launch them through the air at targets, or even rip up pieces of floor or walls with this power. This was awesome. 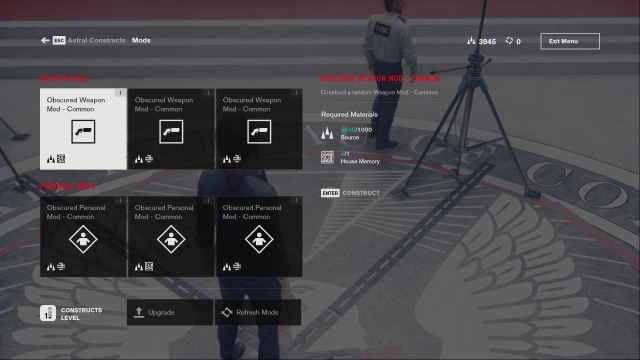 The movement is pretty fluid, and you have a bit of auto aim to help you target, so you don’t have to worry too much about getting your aim perfect. It’s kind of like having a really strong magnet that you can turn on and attract pieces of debris, making you feel pretty powerful but yet, not overpowered as you have a limited amount of Energy. You can even pick up enemies with your mind and fling it others foes. This makes everything around you a weapon, using the environment as a way to defend yourself against strange beings.

As you progress you will gain Source, a resource that let’s you upgrade abilities. This allows for a more personalised play style, as you can choose which abilities you wish to upgrade and even how they will effect your combat style. I really liked this flexibility as I found different situations would call for different methods.

But it’s not just objects you can manipulate, you can even leap through the air, dodge with great speed, giving a lot of freedom of movement in fast paced combat. Boss fights will require you to move around, using each ability to your advantage. These were challenging, stressful but ultimately pretty engaging.

That being said, you might find yourself accidentally zipping into walls or structures as some of these manoeuvres can take some getting use to, but it’s great in helping you evade supernatural beings. This makes gameplay a lot of fun, as you can choose how you handle different situations, no matter what these weird beings have to throw at you…just throw it right back at them!

You also have your very own weapon, a gun that can be upgraded with a number of Weapon Mods to help improve performance. There are also different weapon morphs, for example using Spin will add an SMG type effect, spraying multiple bullets. Or Charge which adds an AOE damage, adding a rocket launcher at your disposal. Since this weapon doesn’t have physical bullets, you will need to keep your eye on the charge gauge, which will regain charge when it’s not in use. Aiming and shooting is pretty smooth, no odd camera angles and just fits right into the combat of the game.

There’s a real variety of enemies in Control, and some of them don’t even have a face. You get some real Resident Evil vibes in some places, especially with some rather failed experiment looking things that spew puss. But it’s not all faceless entities, there are plenty of human creatures that seem almost possessed, and they have varying difficulty as you progress through the complex. Some of them have similar abilities to yourself, can throw objects with their mind, others are more weapons based and will even launch rockets at you. 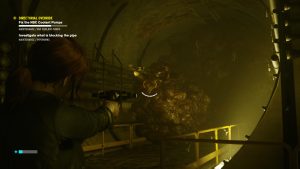 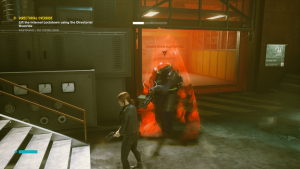 As you walk into darkened hallways, trying to make sense of surroundings there are number of audio and visual experiences to be had. The music makes things feel very eerie, and during combat quite intense. The voice acting is superb, really making you feel a part of the story. Visuals are highly detailed, character’s expressions are full of emotion making you feel fully immersed in what is going on around you. With the way the narrative is shown, it’s quite stylish, almost movie like but with interactive elements. 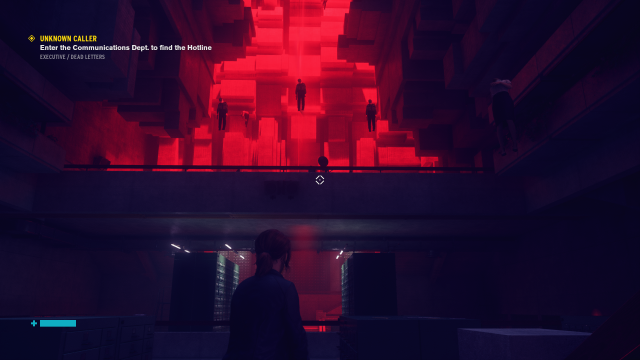 What was really impressive was just how each new areas introduced different visuals, whether it was triggering projector like visions or a simple red glow of lighting, it really shifts the mood making things extra suspenseful. There are also numerous, lifeless floating people which also ups the creepiness.

Control isn’t quite like any game out there, while I could say it takes elements of Resident Evil, but the way it weaves it’s story is quite unique. The action is adrenaline pumping, letting you fight enemies with the power of your mind, what more could you want? Mixing a third-person shooter with supernatural powers, a secretive government agency puts you right into a spy movie…if it had been infiltrated by otherworldly beings that is. What makes Control an enjoyable experience is the freedom to explore, fight how you want and discover the inner workings of a secret complex. 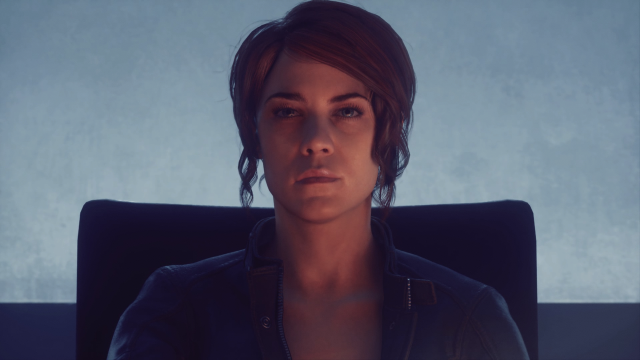 I really enjoyed trying to solve the puzzles, piecing together the different ways the story was told and throwing everything around. I found combat pretty enjoyable once I got use to the abilities. These are introduced one by one, so you won’t feel overwhelmed. It’s hard to fault this one as it’s done really well, with polished gameplay. The only drawback I found was not being able to have multiple saves, as starting new game will overwrite the autosave. All in all Control is an intriguing mystery that is quite addictive to play with it’s fun combat.

Control releases on PC, Playstation 4 and Xbox One on August 27th.

If you enjoyed this game review be sure to check out some of our others including the souls-inspired co-op shooter Remnant From The Ashes Review: Merry Multiplayer Mayhem. You can read next about the lovecreaftian investigative detective adventure The Sinking City Review – Maddening Exploration.

8.5
Summary: Fast-paced action tied in with an intriguing story about a secret organisation which you will need to explore and discover it's hidden secrets. Visually detailed with polished fun gameplay, combining telekinetic powers with shooter combat. A playthrough could take 10 to 15 hours or more depending on the level detail you pay. A full thumbs up for this one.
Story & Setting (9)
Gameplay (9)
Audio & Visuals (9)
Price Point (8)
Replayability (7.5)