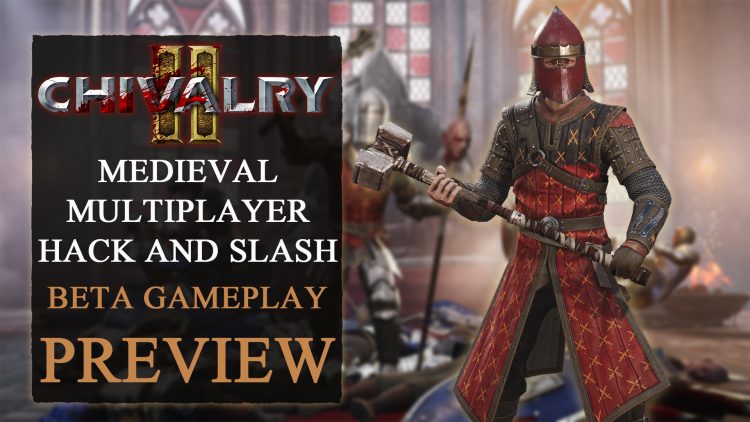 With up to 64 players online chopping each others’ heads off and/or beating your opponent to death with a chicken, Chivalry 2 aims to be a fun, thrilling and gory-filled online multiplayer first-person slasher. The multiplayer beta begins on the 23rd (10am PT) of April and ends on the 26th, so let’s dive in and see what Torn Banner Studios has up their sleeves for the second installment into the Chivalry franchise.

Chivalry is a game all about the combat, with intense multiplayer action that is nearly non-stop. Players face off in epic battles with limbs flying everywhere, and things get really hectic. But before we get into that, let’s first talk a bit about the story and setting of the game, since yes, Chivalry does have one! 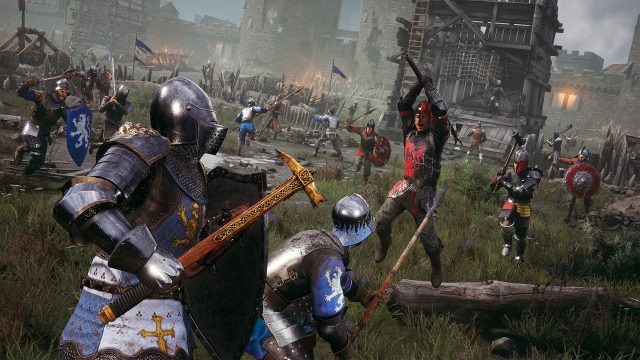 The Chivalry games are set in a fictional universe inspired by medieval Hollywood movies and TV shows. I can’t help but think of Kingdom of Heaven, King Arthur, or even Braveheart for that matter when I think of Chivalry. Both Chivalry games are certainly not tied to any historical realism, but instead are attempting to capture the romance of the era, in all its visceral glory. 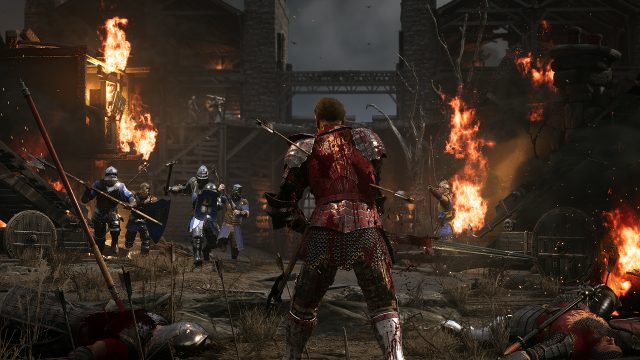 The 1st Chivalry told the thrilling story of the Mason Order rebellion led by Malric Terrowin against the ruling elite Agatha Knights. The sequel will be the continuation of that story, 20 years after the events of the first game. Therefore, you’ll be playing as the Order or the Knights. The Mason Order are inspired by strength, merit and dominance and they have zero respect for the weak. They will show no mercy to their opponents. The Agatha Knights are loyal and honorable and they believe that they are the rightful rulers of the land.

Chivalry 2 will feature a four-class system: Knight, Vanguard, Footman, and Archer. There are a variety of playstyles with 12 subclasses ranging from Skirmisher (hybrid melee/ranged fighter) to Poleman (fighter that keeps opponents away with long melee range). Players’ inventories are limited, so you won’t be able to horde weapons, and pickups may be less useful for you than they were for the original owner, so the roles of each class will certainly play a more significant role than its previous game. 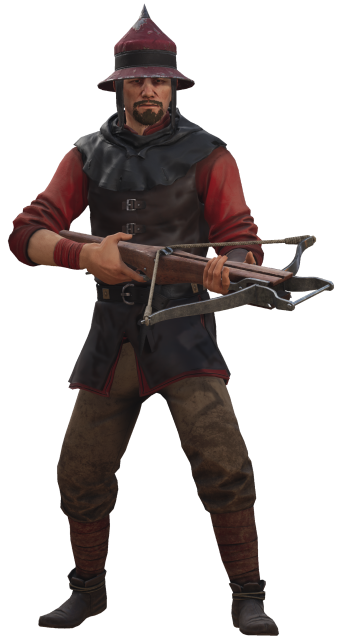 While the foundation of Chivalry 1 is still intact, combat has been revamped with all new combat moves, a weighty and physical animation system, which creates a more natural combat flow. Going over the basics, slash is the easiest attack to land, while stab gives you the longest range attack, and overhead will deal the most damage. Slash, overhead and stab can be held down for higher damage.

Heavy attacks are also useful against blocking or multiple opponents as they will continue through an opponents counter. Special attacks are high-risk/reward moves that consume a huge amount of stamina and will give the player the potential for massive damage. Running at full speed can tackle opponents to the ground or launch powerful sprint attacks. 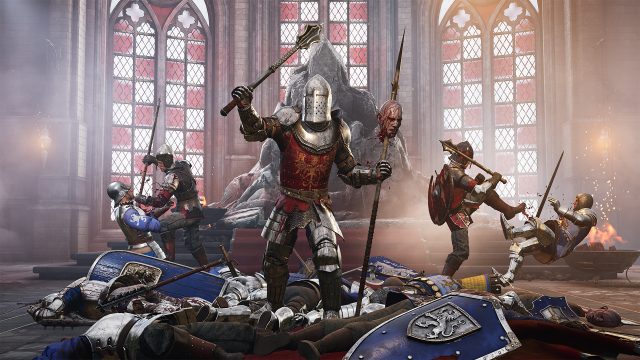 One key animation happens when the player turns their hips. Rather than placing the cursor over your enemy, you’ll want to turn your hips during the attack to land your strike as early as possible or turn away to throw off your opponent’s timing. Parrying and reposting are key and timing is everything while in combat. These are not the only things you can do, however, and there will be plenty of other moves you can pull off, including a dropkick.

Any weapon can be thrown and thrown weapons can be parried. Weapons and many of the objects can be picked up on the battlefield and also be thrown, including chickens, wagon wheels, limbs or even church bells! Should you be struck by any of these flying objects, or any other attacks for that matter, you will certainly need to patch yourself with bandages and keep on fighting.

Yes, Chivalry 2 is hack-and-slash, but if you run into combat button-mashing or if you spin around frantically, you’ll be without your head in seconds. Newcomers will not need to play the first game in order to get acquainted with the combat, and the good news is that there are tutorials to help get you started. You’ll be able to learn every single technique out there, getting your timing and rhythm down may take you some time though. But that’s ok, that’s all part of the fun of Chivalry!

The max number of players online is 64, and it gets loud, crazy, hilarious and very intense. You’ll have animated emotes with improved iconic battle cries from the first game, which means you’ll be able to scream, beg for mercy, taunt, cheer and plenty of others which are too numerous to count. Fighting without a limb will certainly bring an influx of emotions, along with the fact that weapons and items will be flying around the battlefield, making the emotes all the more satisfying. 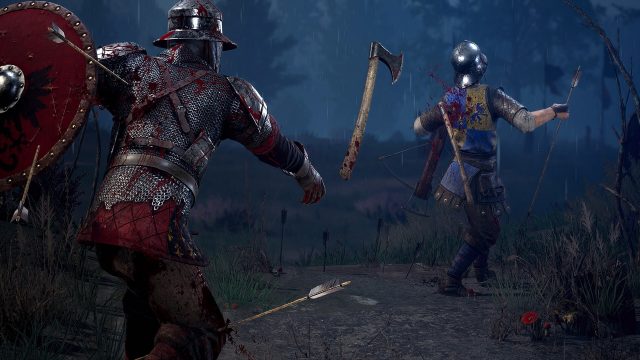 Team Objective maps are a focal point of Chivalry 2. Team Deathmatch and Free-for-all modes will also return, though Deathmatch is always the best way to get your feet wet. I would still highly recommend playing the tutorials first, but when you are ready, start there for some mayhem you’ll be sure to enjoy.

Chivalry 2 will clearly be best played with your friends, as there will be plenty of laughing moments when a tomato hits you in the head, a chicken on fire gets tossed your way, a friends’ head gets chopped off right in front of you, or a player starts spamming emotes just to get a laugh/rise out of the other players/opponents.

All-in-all, Chivalry 2 seems like a very easy game to learn and play with plenty of fast-paced first person action. 64 players online looks like a ton of fun and a game that you and your friends can really enjoy. What I’m not quite sure of is how long will the game hold up? What will keep players coming back for more? Is the game a bit too silly, taking away some of the competitive edge? This remains to be seen, but thankfully, there is a Beta on the way that should help answer a lot of these questions. 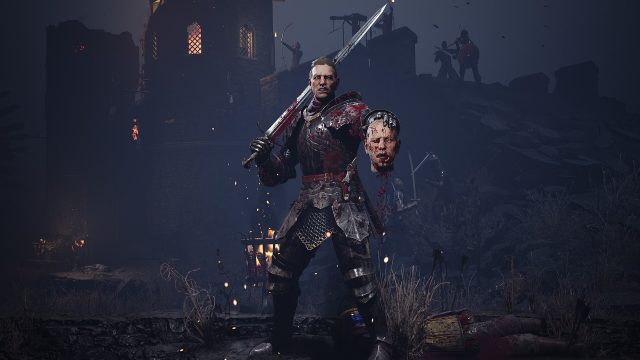 There are no plans for Early Access, so now is the time to go hands-on and jump into the beta on the 23rd of April, which is just a couple of days away now. We are giving away PLENTY OF KEYS, so be sure to check out the giveaway on Twitter for your chance to win access to the Beta if you’d like to play!

Chivalry 2 releases on June 8th of this year and it’s coming to PlayStation 4, PlayStation 5, Xbox One, Xbox Series X|S and PC – with Cross-Play between all platforms. At launch, the PC version will be exclusive to Epic Games store for one year, then it will be available on Steam and other PC platforms.

If you enjoyed this preview be sure to check out next our Elder Scrolls Online Blackwood: Hands-On Companions Preview and Path Of Exile 2 Gameplay Preview.