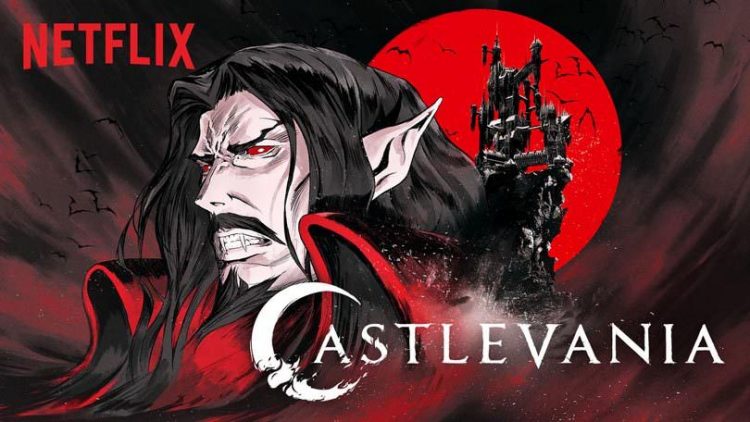 The gaming world and that of other media has a bit of a bad relationship. Aside from the Super Mario Bros. Super Show, film and TV adaptations of popular video games have been near universally…shitty. RIP Captain Lou. On July 7th, season one of the Castlevania Netflix series dropped, an animated take on one of the most iconic series of all time. With shoes such as these to fill, is it worth caring about the already promised second season?

The Castlevania video game series took a dash of historical accuracy, a sprinkle of Bram Stoker inspiration and combined that with at least a gallon of “this sounded cool at the time.”  Set in the land of Wallachia, Dracula and his army of the damned lay siege to the ordinary folk.  The Belmont family seeks to stop his evil.  Starting with this basic premise, the game series expanded to include Dracula’s family, a long chain of Belmonts and an odd assortment of other characters. 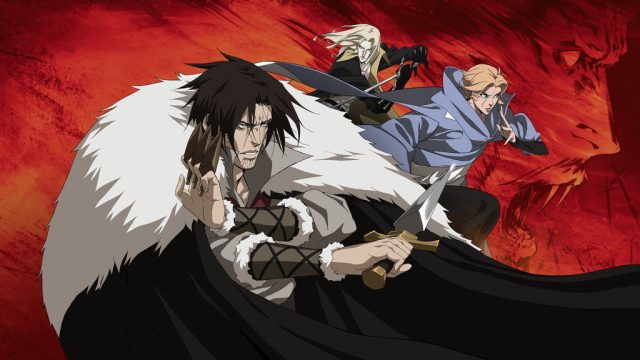 I was pleased to see that the animated Castlevania Netflix series stays pretty darn true to the overarching story of the games. Dracula’s Castle is found by a woman named Lisa and they marry, showing a softer and kinder Dracula. Then she’s burned as a witch and Dracula basically says, “man, **** ya’ll” and unleashes Hell. In a very real and flesh ripping sort of way. Dracula’s son, Alucard makes an appearance and of course we need our Belmont. I don’t mind sharing any of this, because it’s directly from the games and gets carried over into the series.

Our Belmont, Trevor, is the last of the family line. A line whose name is now tarnished. We meet Trevor in a less than noble location and situation, but of course fate pushes him toward his monster hunting roots. And that’s where I’ll bid farewell to this section before I spoil anything major. It’s not the exact plot of the games, but it’s a good spin on it. 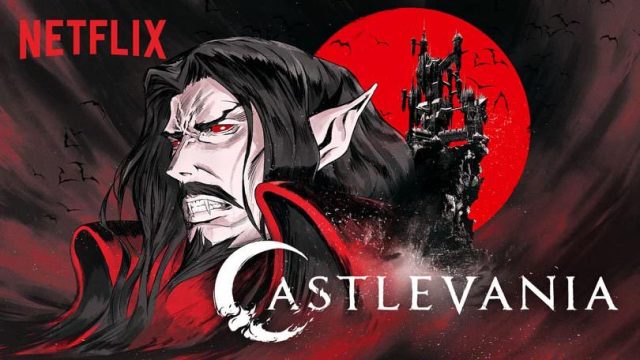 Artistically, it’s what most people would consider anime, or at least inspired by it. Labels aside, it’s a style choice that, for Western audiences at least, is generally considered closely associated with cartoons made for adults. Character designs appear heavily influenced by Symphony of the Night, which is a great choice as it’s the best Castlevania. 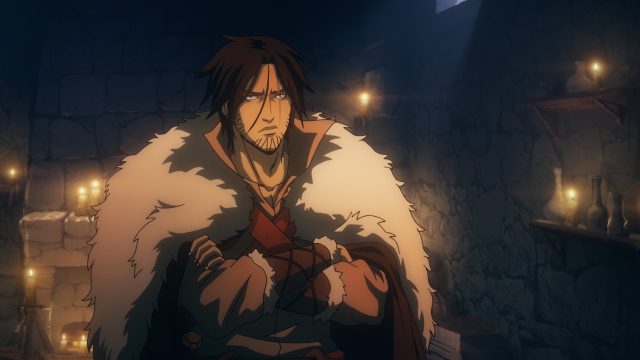 Trevor has beard envy for sure

If you’re in the mood for action, you’ll find no shortage here. Even a short scene with Dracula and a nice old woman manages to go awry. Stylistically, Castlevania is blood and guts eye candy, with over the top scenes that make 80s action flicks seem tame and realistic in comparison. It’s guilty pleasure at its finest for the action fan. Toss a short sword in the air and watch it spin faster than a propeller? Sure, why not! Have Trevor Belmont then manage to kick this sword (mid-spin mind you) and make it fly perfectly like a dart?  Why stop there? It’s preposterous, but in a fun way.

I mentioned the gore, but it needs a more thorough shout out. Even though it’s a cartoon, Castlevania is not for the squeamish. Blood and guts are used to showcase what Dracula’s army is capable of and it’s not pretty. And to be fair, Trevor does his fair share of mutilations along the way.

Purists might find something to hate.  Maybe Dracula’s beard is 19% less saturated with midnight blue than the games or something like that. But I felt it did justice to the source material and was a pretty good ‘toon even without being purely Castlevania.

A couple notable problems did stand out. The first I would call a matter of scope. The second is a problem brought about by the brevity of season one.

In the matter of scope, Castlevania titles started exploring the concept of Dracula as more than “could be The Devil.” In fact, his marriage to Lisa in game is used to create a sense of humanity and draw some sympathy to what could ultimately be a tragic figure. Sure he’s a diabolical maniac hellbent on genocide. But he’s also sad on occasion. The series isn’t shy about this angle, and in fact they might lean a little too heavily on it. In a four episode season, I found myself actively rooting for Dracula through at least the first two episodes, which muddles the tension.

The fact that the Castlevania Netflix season is only four episodes of about 20 minutes each leads to the second major issue for me. I feel like there’s a solid story behind major characters, but there’s simply not enough time for complex character development. I’ll do my best not to spoil it any more, but there’s one character in particular whose motivation changes nearly like a light switch. It’s a perfectly logical plot device, but felt rushed. Similarly, sub plots that could be used over time to make the story richer are wrapped up before they can do more than simply tell you the facts.

7.5
Summary: Overall, the show is a pretty fun ride for Castlevania fans and gamers in general. It's not a mirror image (since vampires can't be seen in mirrors anyway) of the games but it's faithful to its roots.  I don't expect any major awards to be handed out for Castlevania. But honestly, what should one expect about a cartoon inspired by video games that at their heart are essentially nothing more than whipping the bejesus out of monsters? And that's what Castlevania always has been. The series sticks with the formula and that's fine by me.