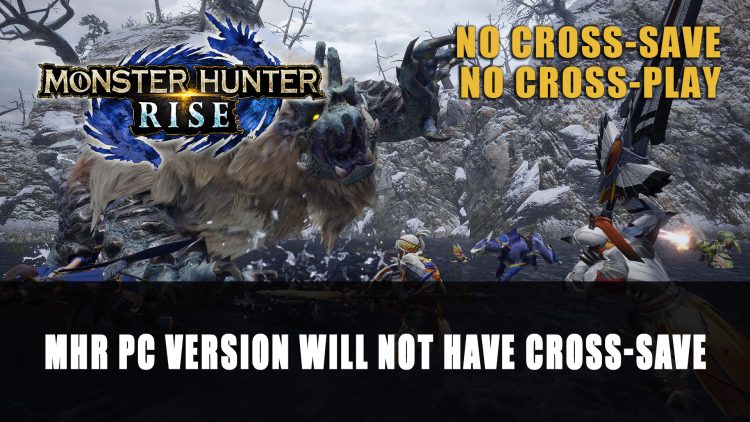 Capcom have said they won’t be implementing cross-saves or cross-play for Monster Hunter Rise between the PC port and Switch.

If you were hoping to jump into Monster Hunter Rise PC with cross-save or cross-play when it releases next year, you’re about to be disappointed as Capcom has said they will be “unable to implement” either of these options. This means you won’t be able to carry over your progress from the Switch version to PC, nor will you be able to play with other players between the two platforms.

Capcom has shared on Twitter that these features which were requested from players won’t be a possibility:

After looking into it throughout the development process, we found we are unable to implement [them] this time. As always, we appreciate your continued feedback and support.

Monster Hunter Rise will be arriving on PC next year on January 12th, with 4K resolution and ultrawide monitor support, plus improved framerates and textures. A new expansion has also been recently revealed called Sunbreak which will be making its way to both PC and Switch sometime in summer 2022.

We’ve heard your requests for Cross-Save / Cross-Play for #MHRise & #Sunbreak, but unfortunately, after looking into it throughout the development process, we found we are unable to implement it this time. As always, we appreciate your continued feedback and support.

Since cross-play won’t be a feature between Switch and PC, not having a cross-save feature seems to go hand in hand. While other games have implemented this feature for both Switch and PC, it looks like Monster Hunter Rise won’t be one of them.

Are you disappointed by this news? Or are you not deterred from picking up the PC version despite starting on Switch? Let us know in the comments below.

Monster Hunter Rise is currently available on Nintendo Switch, releasing on PC on January 18th 2022. The expansion Sunbreak will be arriving in summer 2022 for both Switch and PC.