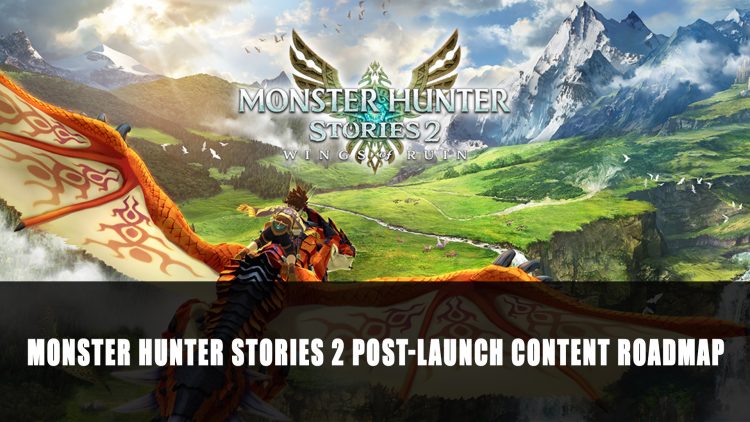 The roadmap for turn-based RPG Monster Hunter Stories 2: Wings of Ruin which includes five free post-launch updates. This includes the previously announced collab with Monster Hunter Rise, introducing the Palamute companion as a rideable Monstie which arrives on July 15th.

The second update will arrive on August 5th, adding Hellblade Glavenus and Boltreaver Astalos as new Monsties, alongside a new co-op quest featuring the Elder Dragon Kulve Taroth. Rider will be able to join up together to take on the challenge. While the Elder Dragon won’t have a rideable Monstie form, it will have materials as a reward from the quest and can be used to craft “powerful” new equipment.

The third title update for Monster Hunter Stories 2 will add Soulseer Mizutsune, Elderfrost Gammoth, and Oroshi Kirin as new Monsties. This update is scheduled to release in early September, which will be followed shortly by the Title Update 4 towards the end of September. This update will bring Dreadking Rathalos and Molten Tigrex as new Monsties, and will also have Kulve Taroth in a new high-difficulty co-op quests, with greater rewards.

The last update will come out in October, adding the Silver Rathalos and Gold Rathian as Monsties, plus a new co-op quest exclusive monster to part-take in with a high difficulty. 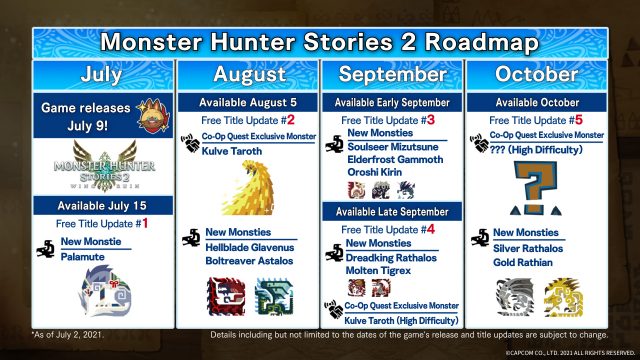 Capcom also released a launch trailer and a co-op gameplay video, previewing what teaming up with a friend will look like when hunting your favourite Monsters in both local and online.

Monster Hunter Stories 2: Wings of Ruin comes to Switch and PC on 9th July, and a free demo is available currently on Switch. Progress from the demo will transfer to the full game, and players will receive a Kinship Talisman when linked with Monster Hunter Rise.