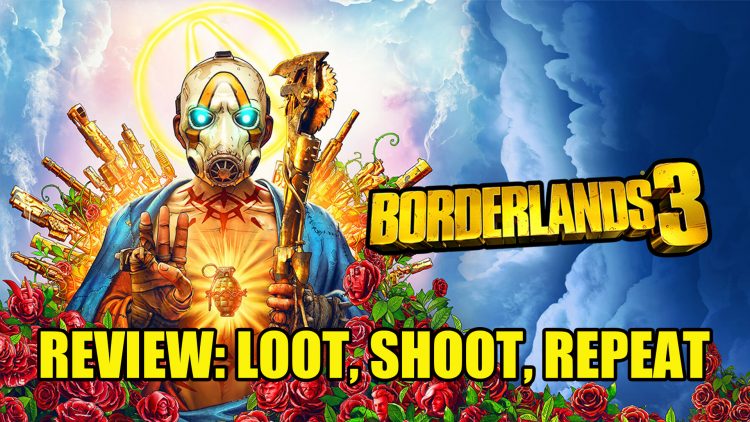 You shoot stuff. You get crazy guns. You shoot more stuff. It’s more Borderlands, which honestly is all you need to know. If you really need the nitty-gritty however, read on.

I really wish I could score these two items separately. Despite this being my first Borderlands game, I’ve always appreciated the setting. The ideas of the vaults, of this dystopian galaxy where life is cheap, brutal and over-the-top, all of this is very well-realized. During my adventures I enjoyed traveling around and seeing the different worlds. Overall the setting is very well done. The story? The dialog, quests, and characters you interact with? Not only would I physically rip out the story if I could, but I would burn it and then scatter the ashes in the dump. 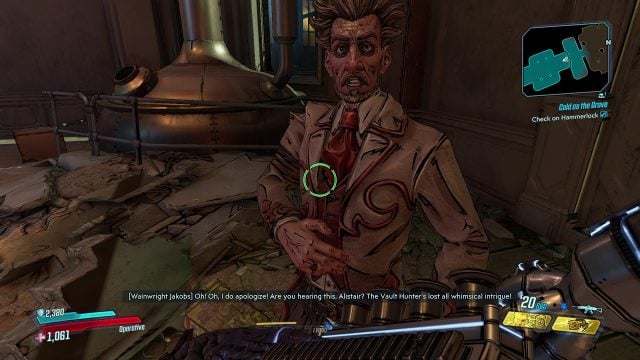 This is not to say that every character in this game is bad. There are some OK characters, though I wouldn’t really go much above OK for them. I understood going in that I wasn’t to expect Super Serious(TM) story telling here, that Borderlands is a ridiculous over-the-top world. What I got was some of the most cringe worthy, aggravating, and dumb dialog and narrative I’ve ever encountered. It was so bad the only way I could stomach the game was to turn off the dialog volume. The story in this game is drivel, Borderlands 3 would be improved drastically if it were removed, and I would score it a 1 if it was in its own category. Oh and to make it worse, you can’t skip cut scenes in this game. Screw this game’s story.

OK. Deep breath. While the story makes my blood pressure rise, and not in a good way, the gameplay on display is mostly good. Let’s start with the awesome. This game has some of the craziest and most entertaining guns I’ve ever encountered. You want to pick up all the guns that drop because you’re never quite sure what crazy attribute they’ll have. The guns are fun to shoot and feel like crazy implements of destruction. However, I’m much less enthused by the fact that you start with only being able to equip two weapons and slowly unlock additional slots. The only thing this accomplishes in my opinion is to slow down gameplay, since it forces you to interrupt the shooting to open up your inventory and fuss with your guns. 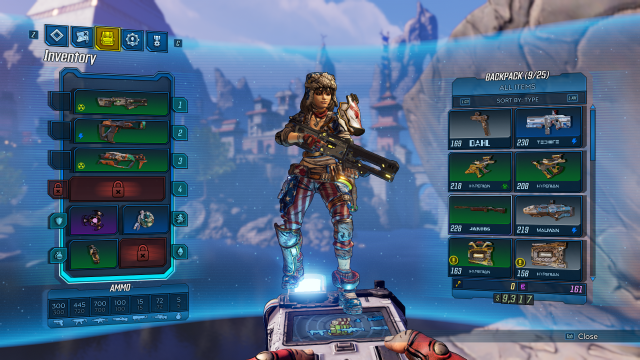 Speaking of inventory, Borderlands 3 starts you off with a criminally small inventory. You get to upgrade it once you get to your spaceship, but it was still aggravating to once again open up and fuss with my inventory to figure out what I should throw out, so I could pick up that purple that just dropped. This wouldn’t be a big deal if there was some easy way to pop back to base to sell off stuff and then pop right back to where you were, as you can in Diablo 3, but if you fast-travel back to base you’re going to be facing a long trek back. It’s not a big deal, but it was just one more little niggle that interrupts the flow of combat. 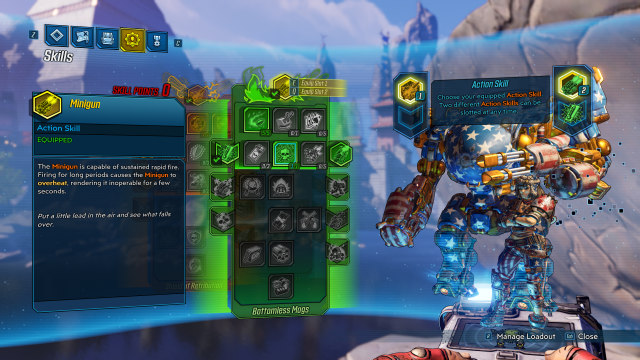 Two final points I want to make on the gameplay. Firstly is that the variety of Vault Hunters definitely play very different from each other. The skill trees and active powers are very diverse and deeply affect how you play the game. This is mostly a good thing, though starting a new character is painful. Just imagine the introduction to Skyrim, but there’s no way to skip it. Ya, it’s that bad.

Final point is that on normal difficulty the enemies felt way too much like bullet sponges. Maybe it was because I was still adapting to how Borderlands 3 wants to be played, or maybe it was just me not gelling with my initial choice of Vault Hunter, but I did not have a good time on my first attempt. Lowering the difficulty to Easy, made it so much more enjoyable for me. And just in case you need to see my FPS creds for my review to be valid, I have beaten Doom 2016 on Ultra-Violence.

The game sounds good. Really good. The ambient tracks for the levels aren’t much to write home about, but the boss tracks? Epic. I keep checking Google Play Music to see if the official OST has been uploaded, they’re that good. The sound effects in the game are solid as well. Good mechanics are all well and fine, but for guns to feel powerful they have to sound powerful, and these weapons do sound powerful. Oh and the enemies squish deliciously when you gib them. 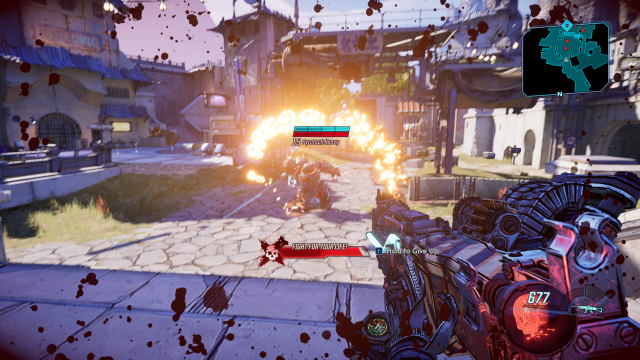 The visuals are however a bit more mixed. Now while I don’t have a top of the line $2000 powerhouse of a machine, it’s no slouch either. I had to do quite a bit of tweaking to the settings to get a solid 60fps. Game still looks good, but texture pop-in is a massive problem. Nothing major, but it does distract from the overall visual quality of the game.

Let’s scratch out the word “Replayability” and replace it with “Longevity.” The thought of playing back through the campaign with a different Vault Hunter fills me with dread since there is no way to get away from the story. Despite that, this is a game that can keep you entertained for a very long time. After you complete the main campaign there’s still a lot of stuff you can do. A hoard mode, co-op wave challenges, Mayhem Mode to change up the base experience as you go back through to clear out all the side quests, and if you can stomach the story, a New Game+ mode. Without question there is a lot of game here, even if you aren’t technically replaying it. 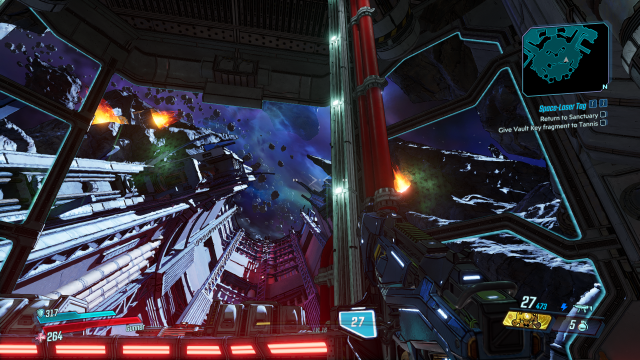 Now this one depends on the version you’re talking about. The base game for $60? Not bad. As I mentioned in the replayability section, you are getting a lot of game here and the gameplay is mostly good and well polished. The $120 complete edition that includes the $50 season pass? No. Not even close. Wait for the supposed four additional campaign add-ons to come out, then assess if it’s worth your money.

This is an interesting review for me to write. I had a lot of trouble getting into this game initially for a variety of reasons. First and foremost, while I love FPS games I’m lukewarm towards looter-shooters and Borderlands is a FPS looter-shooter. I tend to be a hoarder in games and I always have an adjustment period when I start playing loot based games, and this was no exception. 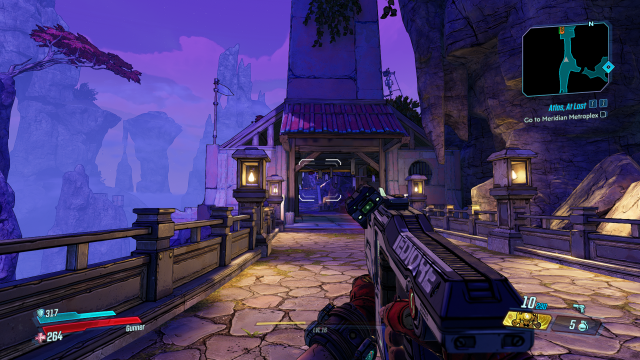 The other issues that caused me to actually have to restart is a combination of choosing the wrong Vault Hunter and setting the difficulty too high. I just couldn’t gel with the Vault Hunter I initially chose and was getting really annoyed with the bullet sponge nature of the enemies. That, and the story, caused me to take a week away from the game. I came back, chose a different Vault Hunter, lowered the difficulty to Easy, and turned off the dialog. Much, much better experience the second time around. I normally don’t give games a second chance, but in this case I’m glad I did. 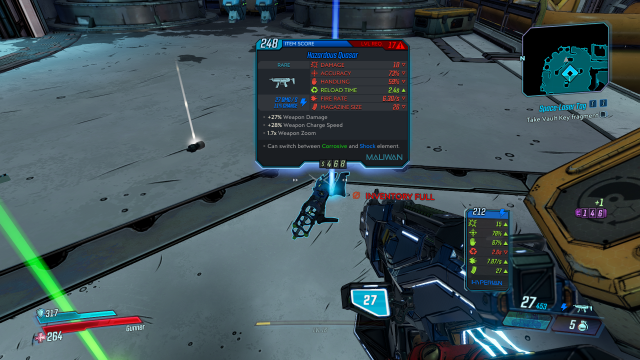 Borderlands 3 is more Borderlands. If you enjoyed the previous games in the series, then there is nothing here that’s really going to change that. True the story is worse than worthless, but the focus is on crazy guns with over-the-top effects. If you didn’t enjoy the previous Borderlands games, then again there’s nothing here that’s going to change your mind. It’s the same systems and the same gameplay with a little bit of additional polish. If you’ve never played a previous game in the franchise but you like FPS and looter-shooters, then you’ll probably enjoy Borderlands 3. Just, do yourself a favor and turn off the dialog.

If you enjoyed this review be sure to dive into some of our others such as Disco Elysium Review: Dark Humor Goes Detective and Code Vein Review: More Than A Souls-Like.

6.8
Summary: Borderlands 3 is an OK game. The shooting and the looting is mostly good with just a few niggles here and there. It could have been a good game, possibly even a great game, but is held back by a truly abysmal story.
Story and Setting (6)
Gameplay (7.5)
Audio and Visual (7.5)
Replayability (7)
Pricepoint (6)