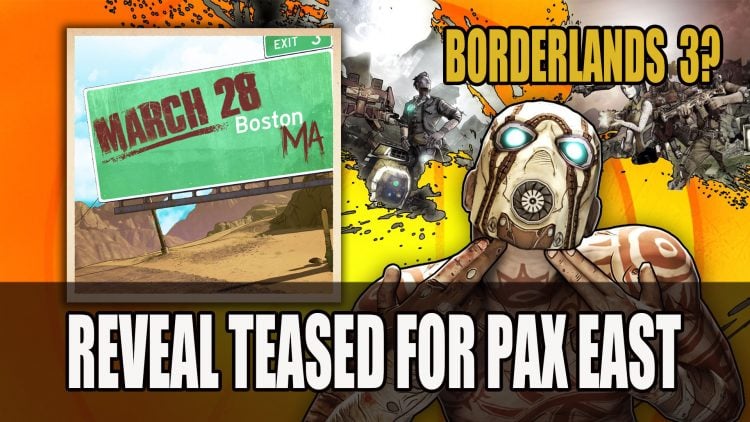 This year’s PAX East will be attended by Gearbox who confirmed they would be going and prepared to show some “never-before-seen reveals”. They now share a tweet that drops clues pointing to a Borderlands 3 reveal.

The latest tweet shows a road sign with the date March 28th as well as Boston, which is the same date and location of Gearbox’s panel for PAX East. Not only is the image done in a similar Borderlands artstyle but also has an “Exit” sign with a cut off “3”. There’s not much else to go in this picture, but this could mean they are ready to reveal their third entry in the Borderlands series.

Gearbox will be hosting their panel at PAX East at 2:00pm EST on Thursday 28th March if you want to catch it live.

The first Borderlands was released back in 2009, an open world action-RPG shooter that revolved around character-building elements. Deemed as a “role-playing shooter” by Gear Box, set in the distant future where mega-corporations have taken control of a range of planets, colonising and reaping mineral wealth. What was most striking about the game was its unique artstyle, strong RPG elements and an abundance of loot…just lots and lots of loot.

When Borderland 2 came on the scene in 2012, it added all new-classes which include Siren, the Commando, the Gunzerker and the Assassin. New areas of Pandora were made available as well as an improved player experience. They also added some memorable new characters and included the return of some well known ones, from the previous game.

There was also the Borderlands: Pre-Sequel in 2014 which takes place between the first and second games, and was a story told by the captured character Althena. This entry expanded on the low-gravity combat as well as oxygen-powered double jumps, icy cryo and added additional deadly weapon classes.

This leaves the question of where Borderland 3 will take players now with sci-fi online co-op shooters such as Anthem and Destiny 2. What will the next instalment offer that can help the game differentiate itself, while still holding onto what made their  previous games memorable for fans? They could go in the direction of Fallout 76 with survival mode, or the upcoming The Outer Worlds with it’s own unique version of the VATS system. Guess we’ll have to wait for more information and the actual reveal which looks like it will be at PAX East.

Be sure to catch the live panel on at PAX East at 2:00pm EST on Thursday 28th March.

If you want more news be sure to check out next Path Of Exile PS4 Release Launches On March 26th as well as Kingdom Come Deliverance And DLCs Are Now 50% Off On Xbox One. If you want some insight into the sci-fi loot and shoot Anthem, be sure to read Anthem: Final Impressions Review.

One comment on “Borderlands 3 Reveal Teased for PAX East”