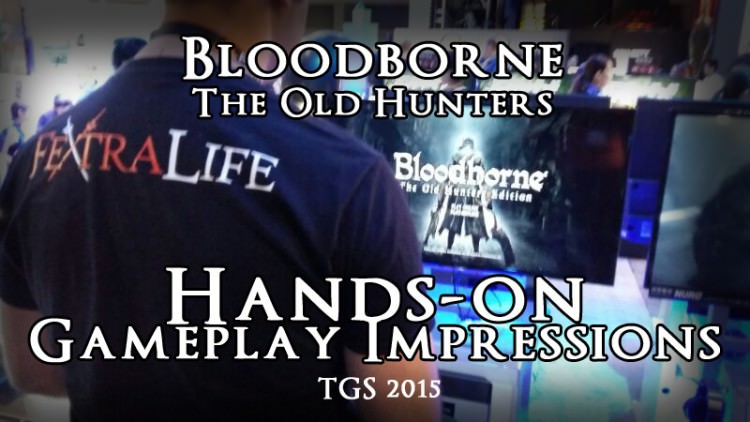 Today, we braved some wind and rain to train all the way to Makkuhari Messe and try hands-on gameplay of Bloodborne The Old Hunters and Dark Souls 3. In this article, I will detail impressions from my first sit down with the Bloodborne Expansion. Everything we confirm will be added to the wiki’s The Old Hunters page. You can also read our interview with Yasuhiro Kitao here.

You are given a choice between three classes, equipped with new weapons. (official translations pending) 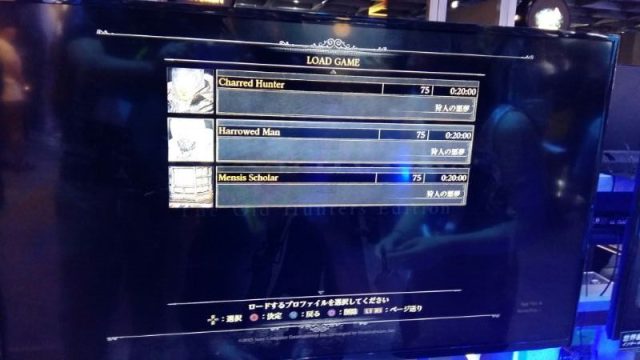 The three classes of the Demo

For our first play session, we chose the Harrowed Man.

You begin in a whole new area, characterized by pools of blood and corpses that wriggled in this swamp, their torsos half decomposed. I first went to my inventory and checked out the stats for the weapons. The bowblade is a one handed sword with medium to short reach, complimented by the off-hand attacks that thrust forward as a fist. The transformation has your character holding an impressive greatbow on the left hand and an arrow on the right, allowing you to shoot a considerable distance and with unprecedented precision, at the cost of only one silver bullet per shot (even charged ones!). Be mindful, however, as smarter enemies will dodge your arrows.

The character was a level 75 build, with stats allocated for the strength/dex/arcane combo of this weapon. You can find the full stats of the bow as well as its imprints on its wiki page here. The moveset while on blade mode was a mix of sword and thrust rapier, with the interesting option to use your off-hand knuckle to punch enemies here and there with L2. It also included an R2 chargeable spin attack, which would have been useful against groups of enemies but can be easily interrupted if you are hit, making it inferior to the Hunter’s Axe R2. The bow mode, however, had all the makings of a great weapon due to its range, and it could almost one-hit smaller enemies, and stagger and knockback larger ones if charged properly.

here is some floor video of people playing… Badly lol

We wore a new set, ragged and dirty, with bandages resembling the one worn by the Suspicious beggar. An official translation is not available, but it may be called the “Harrowed Set”

We found some new enemies who are possibly using weapons available to players.

A new item, a timed bomb such as a nailbomb, was found early on. We didn’t get to try it on our first go at the game, but we will update this section and the wiki as soon as possible. 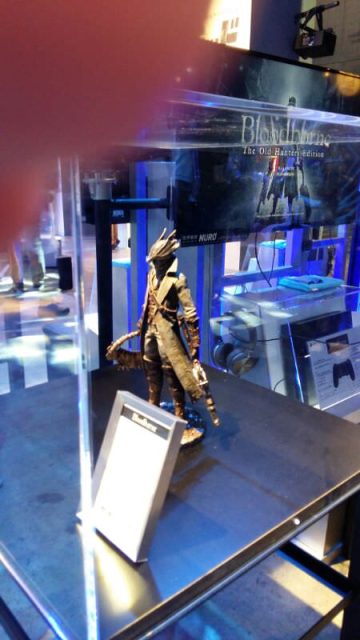 We had to take a picture of it! So great

Ludwig: “Help, Help” read the cries as you enter the boss area, and you are introduced to a deformed humanoid with eyes on the insides of his mouth and corrupt extremities. Think the Bloodletting Beast and One Reborn mashed up into an agile amalgam of extremities

The boss had an aggressive moveset and quick hand slashes, motioning forward to keep up with the hunter. We focused on trying to test the viability of the Bowblade’s bow form, and whilst it did decent damage there was not enough time to wind up attacks given the quick movements. It used magic in a frontal aoe motion, which was hard to dodge if close but not that deadly. Other attacks included an aerial leap, and a frontal charge, as well as biting forward in quick succession. 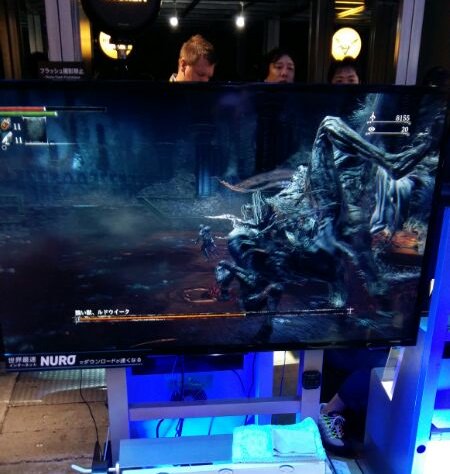 Deadly Ludwig has changed Bloodborne’s Lore for the fans

We are off to try the other two classes, check back later for a Dark Souls 3 magic preview and more Bloodborne! Enjoy the trailer to hype again