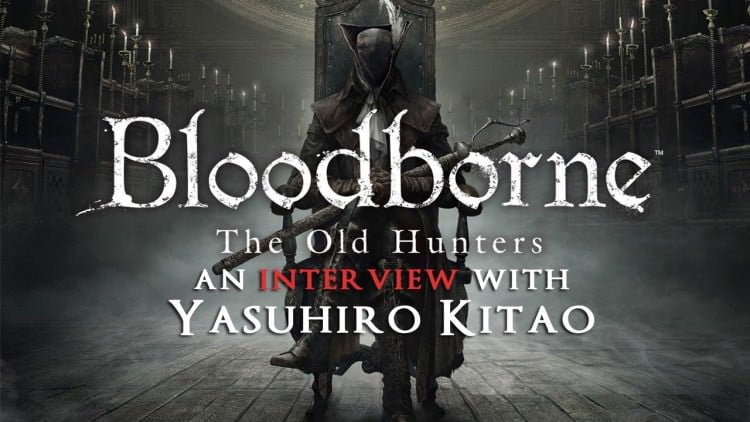 More Bloodborne! More, more, more!! That’s right, after all the info we’ve cranked out over the past 36 or so hours, we have even more!

We were incredibly lucky to get an interview with the awesome Yasuhiro Kitao (head of Marketing for Sony Japan, who Fex beat the Watchdog with) and asked him some questions about the game:

1) How many Weapons will the The Old Hunters bring?

Including Main and off-hand weapons, there will be more than 10 weapons added to the game.

There will be several new attires added, but we cannot tell you the number at this time.

Fex’s Note: We know of the “Disguise Hood” and other bits of this attire worn by the Harrowed Hunter. Check details and soon more images here.

3) How many new Bosses? Ludwig was a notable Boss announced recently, will there be other notable ones that will surprise the player based on the lore of the game?

There are more bosses, but we cannot tell you the number. You will see things that reinforce or shake theories and expand on the story, so look forward to familiar names.

Fex’s Note: Ludwig may thus not be the only lore-impacting surprise. You can see his movesets on the video below. The demo was made easier to account for the conditions of the floor.

3B) Will we see any notable figures from the lore make an appearance as an NPCs? Will we get to see younger versions of existing NPCs?

We can’t confirm this at the time, look forward to it.

Fex’s note: There are new NPC summons such as Old Hunter Yamamura. To summon him, you need a new item, an “Old/Elder summoning Bell”. I will be adding translations of the Japanese flavor text (description) in the morning here.

4) How many new areas, and how will they be implemented into the game? Where will you enter the DLC from?

There is more than one area, and the demo is showing only a small section of one of those areas. The areas have varying styles (not just the style shown in the demo) and when asked about a frozen landscape, he answered with a laugh and a “we’ll see”.

The DLC will be accessed after a certain amount of progression, using a specific method. Players should be able to enter the DLC using their current saves and characters. I can’t quite tell you if it would be possible to progress to a point where the DLC cannot be entered.

Fex’s Note: Word on the street is 3 areas, comprising about 25% of the size of the total game. A sizeable addition!.

5) Is there any new Chalice Dungeons and Chalice Bosses? Will there be any changes to the Chalice system? If So, what are they?

The Old Hunters expansion will not bring new Chalice Dungeons or such, however a patch is planned to augment the replayability and the friendliness of the dungeons, separately from the expansion.

6) What about Gems? Will there be new Gem Types or higher tier gems?

We cannot comment on Gems at this time (laughs)

7) How about rebalancing? Will existing Weapons be patched to accommodate the new Weapons? Any Weapons specifically?

Before launching the expansion, we will consider player feedback and compare current trends to how we envision the game, and we plan a balancing patch before release if we deem it necessary. There should not be any major changes, however.

8) Will there be any changes to the multiplayer? If so, what are they?

Oh … (laughs) this we cannot say yet (laughs more). So many secrets!

9) Will there be new Runes? Covenant Runes?

Ohhh… this I cannot say either (laughs)… but look forward to it!

10) Are there any modifications to NG+?

There will be no core modifications to NG+

11) Have any of the core mechanics of the game changed? If so, how?

Core mechanics will not  change, however the whole game will change as the new NPCs will not only be within the expansion but instead be available, appear and affect other areas of the game.

12) Are there any plans for another Bloodborne Expansion next year? What about Bloodborne 2?

We don’t have any specific plans at this time.

13) Is there anything in particular you would like to say to the Bloodborne Community???

Miyazaki san has worked hard to make this expansion and Dark Souls 3 live up to From Software’s standards, and we hope you all enjoy it.

That is it for the interview, and although we are very tired from two long non-stop Gameshow days, we have some more bits and pieces regarding weapon names, lore and descriptions, as well as images of new items. Bookmark this page on the wiki to see new updates during the weekend after we’ve had a chance to sleep!

23 comments on “Bloodborne: The Old Hunters – An Interview with Yasuhiro Kitao”