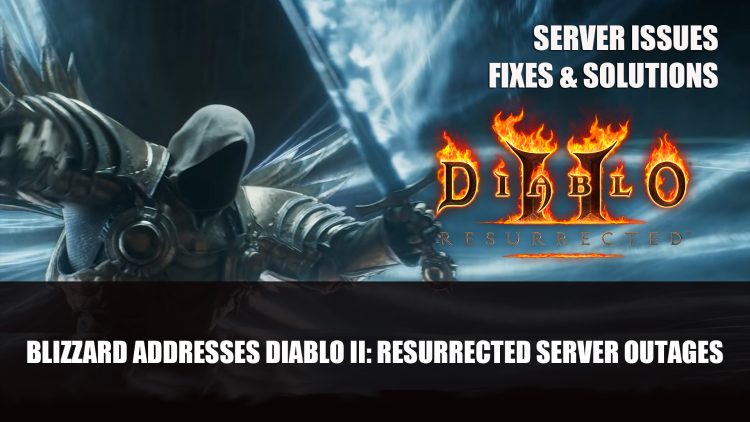 Diablo II: Resurrected has been experiencing a number of server issues since launch last month, which has also led to crashes as well as outages. Blizzard have now posted about the ongoing issues and the plan to fix them.

Diablo 2: Resurrected has been experiencing a number of issues concerning servers since its launch on September 23rd. In a rather lengthy post on the official Blizzard forums, the community manager Adam Fletcher better known as PezRadar, outlined the several problems which are causing outages for Diablo 2.

According to the post, they are not tackling just a single issue but different problems such as character progression loss caused by server crashes. The smaller issues have amounted to a number of solutions needed. One particular issue for Diablo 2: Resurrected is the number of players now logging in, which hit an all-time high with the player count last week, now higher than the launch.

There have also been instances of progress loss for some players, being caused by characters being stuck in the regional database. Essentially your character is assigned to both a regional and global database, but with the database “falling over” some characters became stuck in the regional with no way for the developer to move them out without causing either everyone to lose progress or causing game downtime in order to remedy the situation.

One major problem is that Diablo 2: Resurrected has large amounts of game code that are relying on code that was from the original. This legacy code not only affects things such as game creation and joining but reading character data, game lists, server health and more.

The developer has gone in to update what they can but a lot of it still relies on the same system, which was fine back in the early 2000s for the most part, but as player behaviour has changed since then, it runs into some problems. Players now will create new game lobbies to farm certain fights frequently with short intervals which isn’t something that players did back when the game was first released. These new practices cause strain for the system, with these new instances causing server congestion and preventing other services from going through.

In order to solve these problems, Blizzard has outlined a few solutions such as rate-limiting, login queue creation, and breaking up the critical pieces of functionality into smaller services. Rate limiting involves limiting the number of operations players can commit such as those who like doing certain runs, meaning creating a new game frequently. In order to reduce the load temporarily, these will be limited for time being, a measure with a temporary fix.

Login queue creation means stopping a large number of players that log in at the same time, this means introducing login queues which is similar to that of World of Warcraft. Over time Blizz will be able to increase the population caps but for now login queues have been partially implemented.

Lastly, breaking out critical pieces of functionality into smaller services, this just means being able to break down certain services into their own systems, which will help reduce the server load.

While undoubtedly fans are frustrated and unhappy with their Diablo 2 Resurrected experience with these problems, hopefully these fixes can alleviate the server issues and get players back into the game with a smoother player experience.

Previously developer Vicarious Visions have revealed they have new ideas for content for Diablo 2: Resurrected which may come in future.

If you’re looking for our latest Diablo 2: Resurrected guides, be sure to check out next Paladin Build Guide Diablo 2 Resurrected | Holy Fire Paladin and Diablo 2 Getting Started Guide & Tips (Skills, Stats, Stash & More).