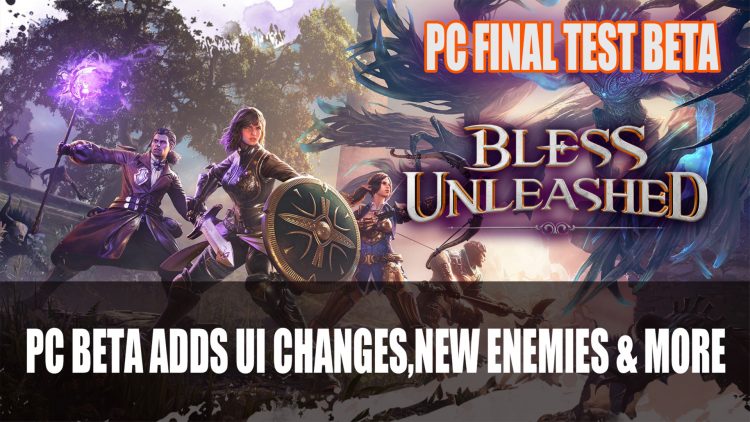 Bless Unleashed will be getting a PC Beta next week, adding a number of changes to the game according to player feedback.

MMORPG Bless Unleashed will be releasing a PC beta with a host of changes influenced by player feedback. The changes include improved UI for PC, combat control, and more according to the latest Steam post.

Bless Unleashed the free-to-play title has been in the testing process on PC ahead of the full launch of the game. The development team have been working hard in trying to include player feedback with each of the tests. The upcoming beta adds a number of changes to best suit the PC version of the game. These changes include updated blessings with unique buffs, smoother combat flow, control improvements, UI improvements, as well as new field elite monsters and bosses.

There is also the addition of an updated dungeon and multi matching system, allowing players to queue simultaneously for dungeons. But the changes won’t stop there as improvements with the lock-on feature are also coming and will be available in the Final Test.

Today, we’ll be visually diving into the main update topics that users can experience during the Final Test.

Visit our official steam to check out the updates!https://t.co/DrQWNFdUWX#BlessUnleashedPC #MMORPG pic.twitter.com/fKRAo756vM

The Final Test PC beta for Bless Unleashed will be happening Final Test from May 12th – May 16th (PDT) / May 13th – May 17th (CEST). According to the official Steam page the beta is open to everyone through the official website and Steam. So if you want to check out the beta be sure not to miss the Final Test next month.

Bless Unleashed is currently available on PS4 and Xbox One. It will be joining PC sometime in 2021.

For more news be sure to check out next Lost Soul Aside Will Be Coming To Playstation 5 and Genshin Impact Releases New Trailer Featuring Yanfei.