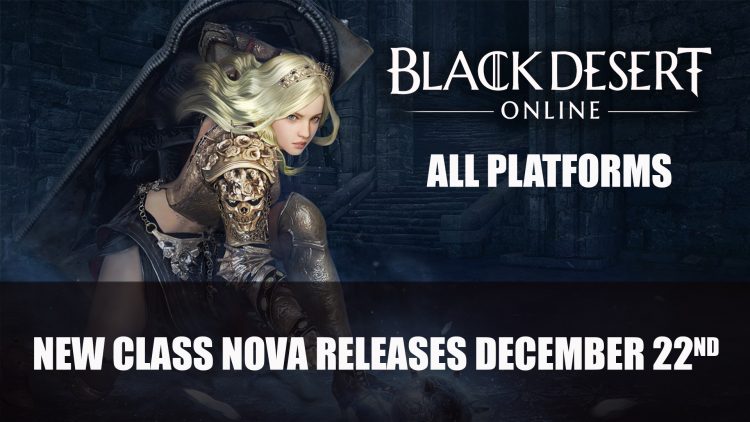 Pearly Abyss the developer behind the MMORPG Black Desert are celebrating the upcoming release of the new class Nova coming to the game this December.

The latest class to join the Black Desert roster is Nova, which will be coming to Black Desert on consoles and mobile, as well as Black Desert Online for PC on December 22nd.

To celebrate the release of the new addition to Black Desert, players can log into the game gain some rewards, with three bundles of goodies. The first bundle can be claimed now, the second will be released on December 17th and the last releasing on December 22nd, to coincide with the launch of Nova. You will have up until January 20th to grab these goodies.

Nova is a strategic frontline fighter, the former princess of Calpheon who jumps into battle with a morning-star and tower shield. Her plight is to reclaim the throne she was once promised. Her abilities include being able to summon royal guards from the center of her shield, to help defend her, or create frosty talons to take down her enemies. Nova marks the 21st class to be joining Black Desert or Black Desert Online, and the 13th class to be added to the mobile version.

In 2021 Pearl Abyss will be taking over the game’s service for the PC platform in February. They will also be releasing further PvP content, PvP crew battles in early 2021.

Pearly Abyss have also released a music video featuring the singer and actress Mika Nakashima and Youtube pianist Harami-chan singing “Yuki no Hana” featuring Nova. You can check it out below:

Black Desert is available on PS4 and Xbox One, as well as PS5 and Xbox Series X through backwards compatibility. Black Desert Online on PC. There is also Black Desert on mobile.

For more news be sure to check out next Diablo IV Developer Outlines Weapon Types, Legendary Affixes, Uniques And More and Werewolf: The Apocalypse – Earthblood Gameplay Revealed.