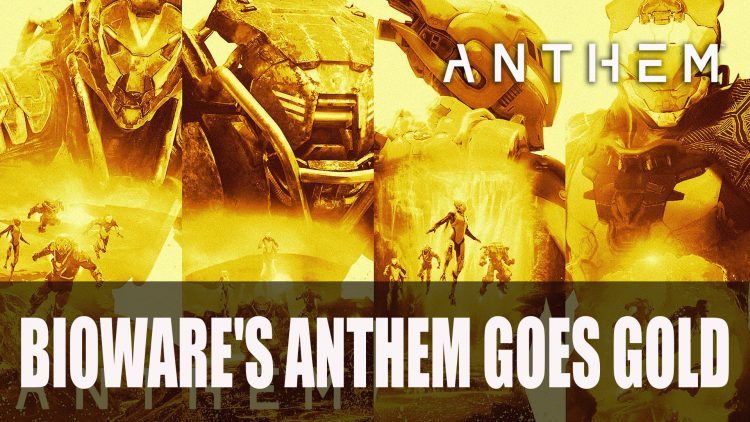 Bioware have announced that their upcoming sci-fi action-RPG Anthem has officially gone gold, this means Anthem will be ready to roll come release date on February 22nd.

The lead cinematic animator Tal Peleg shared a short but affirmative tweet that simply reads “GOLD” with a picture of Anthem in a golden hue. This indicates that the upcoming action third person RPG from Bioware has wrapped up it’s development and is ready to ship out on launch day. Going gold is an industry standard that means the developers have finished their game, the final master copy has been made and is ready to be produced for retail.

This is great news as it means fans can expect for the game to release on time. It was early this month that EA and Bioware announced the demo dates for Anthem.

Also Lead Producer Micheal Gamble has announced the arrival of Social Hubs, meaning up to 16 players can hang out at the Launch Bay:

After a mission, you can head back to Tarsis and catch up with some of the amazing characters we’ve created for you…OR…head back to the brand new Launch Bay, hang out with your friends, use the forge, reload and grab a new contract. Yeah, we listened to you… details soon! pic.twitter.com/m5sp96IpDh

Anthem comes to PC, Playstation 4 and Xbox One on February 22nd, pre-orders are available via Amazon. The demo will be available to VIP players on January 25th to 27th (those who pre-order or have EA Access or Origin Access) and for everyone else on Friday February 1st until Sunday February 3rd 2019. The demo is already available to download for preload come VIP demo days

If you want to read more Anthem you can find it here in Bioware Releases Part 1 Of Anthem Gameplay Series Trailer and Anthem Producer Reaffirms Loot Boxes Will Not Be In The Game. You can also find out why Anthem made our Top 5 Upcoming RPGs February 2019 as well more RPG’s coming this year in our Fextralife’s Top 10 Upcoming RPGs Of 2019.