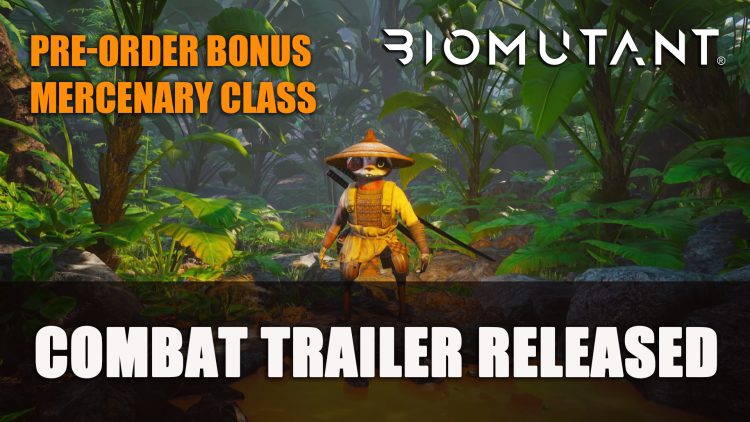 A new trailer has just dropped for upcoming Biomutant, an Action-RPG by developer Experiment 101, being published by THQ Nordic. The combat trailer dishes out some of the wacky moves and creatures players will encounter in the furry world of Biomutant. The kung-fu fable inspired RPG shows off some of the fast-paced action, mech, inventive weapons and sprawling world.

A new pre-order bonus class has been announced as well. Those who pre-order the game before its May 25th release will gain access to the Mercenary class DLC, which is described to have “a unique combination of perks”. The Mercenary class can dual-wield weapons as a starting ability, it also comes geared with a classic Katana and shorter Wakizashi blades. You will still be able to get the Mercenary class without pre-ordering, but it will be purchasable.

You can find the details for getting the pre-order bonus Mercenary class DLC below as state by the official Biomutant website:

The Mercenary offers a unique combination of perks and is playable from the start through this downloadable content only. The Mercenary has dual-wield as a starting ability and is geared up with a classic Katana and the shorter Wakizashi blades to explain it in real-world terms. Simply put, it’ll let you experience the world of Biomutant as a classic samurai-looking warrior from the very beginning.

Who gets the Merc Class as a preorder incentive?

The Mercenary class will be included in all digital preorders, as well as all physical Super SKUs of Biomutant (no matter if it is a pre-order or not). Inside there will be a little leaflet with the access codes on it. Pre-orders for the physical standard edition will not get the Mercenary.

Will it be exclusive or is there a difference for PC and consoles in terms of digital preorder?

No, they are basically the same; the only item that will be exclusive to the console will be a PlayStation 4 theme of Biomutant.

Will I be able to buy the Mercenary after release?

Want to know more about this upcoming martial arts inspired title? Check out our Biomutant preview here. You can also check out the previous gameplay and our thoughts find it here in Biomutant New Trailer Features Combat, Characters And A Hand Mount.

For more news be sure to check out next Monster Harvest Releases May 13th For Switch And Steam; June 3rd For PS4 And Xbox One and Under The Island A 2D Action-RPG Announced For PC.