In this Biomutant Build Guide, I’m going to be showing you my Dead-Eye Build, which uses a deadly combination of Perks and an Automatic Rifle or Rifle to shred enemies in seconds. This Build is not overly complicated, is good for new players and veterans alike, and is an excellent starting point as you learn the ins and outs of combat. If you intend to play a Ranged Build, you need ideas on how to play one, or you like Automatic Weapons or Rifles, then this guide is for you.

Automatic Rifles and Rifles in Biomutant are a ton of fun, because they deal damage very quickly compared to either Guns and Shotguns . When playing Biomutant, even on the hardest difficulty, you don’t want to spend a lot of time fighting each enemy. This Dead-Eye Build specializes in very fast kills in order to make combat go quickly, succeeding in making enemies feel less bullet-spongey.

Choosing your Breed in Biomutant may seem like an important affair, and it is true that it has some impact on your character. However, it is not particularly important which Breed you choose for this Build because there are no Stats that directly increase Ranged Damage, with the exception of Critical Chance.

Critical Chance will result in doing Critical Damage more frequently, and is great for any Build, but is the best choice if you’re aiming to make a Ranged character. For this reason, I highly recommend either Primal or Murgel for this Build. 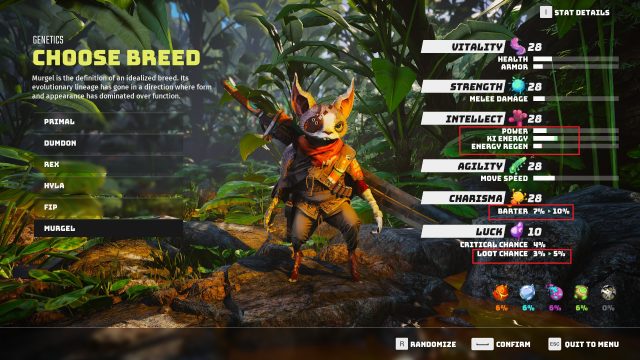 Primal has the highest Critical Chance of any Breed, which will benefit our Dead-Eye Build the most in terms of raw damage. However, Murgel has the same Critical Chance, and has higher Loot Chance and Barter. The only real way to increase your damage with this Build, besides increasing your Critical Chance, Critical Damage and upgrading your Weapon at a Weapon Upgrade Bench, is to find or purchase better Weapon components. For this reason, Murgel has an edge since Loot Chance directly affects the quality of Gear you find, and Barter will reduce the cost to buy parts.

Either of these works, so the choice is yours. Just note that Breed is not so important here, and you can actually make this Build with any Breed if you really want to, and it won’t be less optimized by very much.

Next up you have Attributes. During Character Creation you will only be able to increase your Strength, Agility, Charisma, Intellect, or Vitality. Of these, Vitality will likely benefit you the most as it helps keep you alive, and also is required for a certain amount of Armor. Strength is also not a bad option, since you will have to melee very rarely, because some enemies are immune to Ranged Weapons. I recommend setting Vitality to at least 30 and the rest going into Strength and Charisma for more Melee Damage, and more Barter which will help you buy things for cheaper.

Each time you level up you will get to place 10 points into 1 Attribute. What you want to do here is place them all into Luck every single Level in order to gain Critical Chance and Loot Chance. Critical Chance is the best way to improve Ranged Damage from a Stats perspective, and Loot Chance helps you find better components to outfit your Weapon with.

The only exception is if you need to meet certain Attribute requirements for some really great Weapon component, or Amor, then boost that Stat in order to wear it. However, with 30 points in Vitality, and 30 points in Strength you shouldn’t need to do this for quite some time. Just pump Luck and you’ll be set.

When it comes to Class selection Dead-Eye is the Class of choice for a couple of reasons. First, it comes with the Perfect Reload Perk, which allows you to hit Reload when there are only a few rounds remaining in your Ranged Weapon to instantly Reload the Weapon and gain a damage bonus to the next magazine you expend. You will shoot your way through your magazines quickly, so this Perk is a must, or you will be spending a lot of time Reloading (particularly early on). 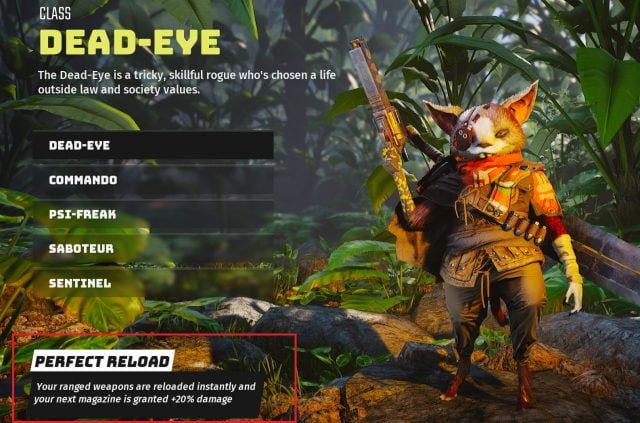 And while it is true that this Perk is available to any Class, what we really choose Dead-Eye for, besides earlier access to this Perk, is Sharpshooter. The Sharpshooter Perk doubles your damage with two-handed Guns, which Automatic Rifles and Rifles both are. Let me repeat that, it doubles the damage of your two-handed Ranged Weapons…

This one Perk might be the single most powerful Perk in Biomutant, and it should be the first thing you select when you reach Level 15, since this is the earliest Level you can obtain it. Plan ahead and make sure you have 3 Upgrade Points saved for when you reach this Level.

In this section I’m going to run you through the Perks you should look into taking for the Dead-Eye Build, and it will include the ones I just mentioned as well. This should give you some idea of what to select, and it’s not so important what order you take these in.

You should be able to see the theme here. Do more damage, while increasing your mag size and reload speed so that you don’t ever have to stop firing. You fire a lot of bullets with this Build, so you need to Reload a lot, and you want to take advantage of that when you can with Perfect Reload, or Reload more quickly if you mess it up.

You’re obviously going to want an Automatic Rifle or Rifle for this Build, and one of the trickier parts to this Build is that you don’t begin the game with one as a Dead-Eye. This means you must find an Automatic Rifle or Rifle Base-Type or purchase one from a Pew Pew Broker. You can find one in the first outpost you capture, which won’t take long, or you can find a couple around the map, which I will show you.

The first one is located between the Deadzone and Bio Nucleus 8C in a village called Hubbledun on the left-hand side of the map. And the second one is located just south of the Tree of Life in a village called Namby. If you don’t find an Automatic Rifle or Rifle Base-Type when you get to one of these, save the game and reload as some times this changes their stock. You can also by components for your Weapons at these locations as well, so keep that in mind. 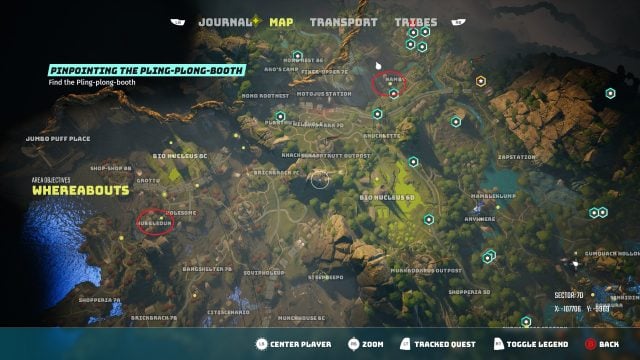 Location of the two Pew Pew Brokers so you can get the Automatic Rifle Base Type if you cannot find one. 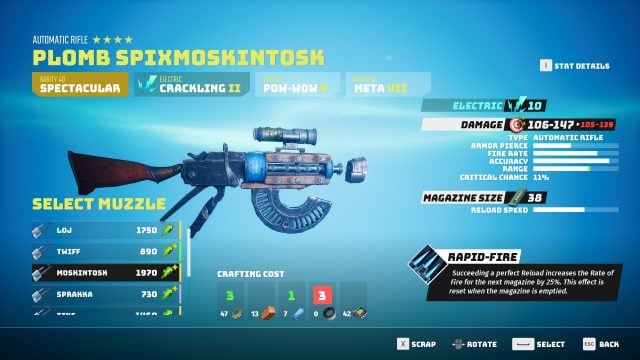 While this Muzzle increases the Range, it reduces your damage and therefor is not recommended.

There is one great “trait” let’s say, that works well for this build if you can find it on a Rifle or Automatic Rifle, and that is Chainshot. This weapon trait allows your shots to bounce between nearby enemies, turning your gun into an AoE machine. If you need to eliminate enemies even quicker, then try to find a Weapon with this trait on it.

Look for Armor that has a decent amount of both, and don’t worry too much about the other Stats. Ki Energy is nice since it allows you to Dodge and swim more before running out of Energy, but is not super important. Addon Slots are also good, but they tend to just add more Armor, so try not to worry about this too much early on. 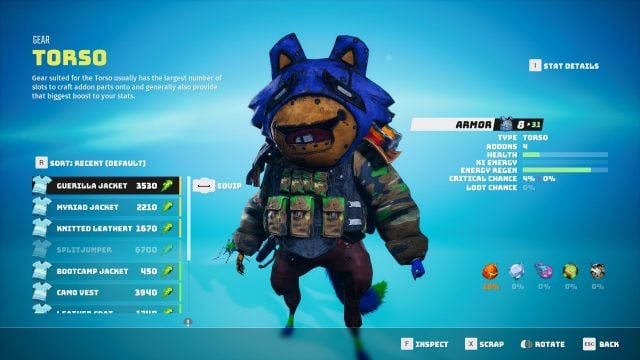 This Jacket provides much more Armor, Health and Energy Regen, but loses 4 Critical Chance. You’ll have to decide what is more valuable to you when selecting Armor.

You actually don’t need any Wung-Fu for this Build, because most of the time you’ll just be trying to unload your ammo into the enemy’s face as quickly as you can before swapping to the next target. Save your Upgrade Points for Perks, and try not to spend them on Wung-Fu, since you don’t really need it.

When it comes to Mutations, much like Wung-Fu you don’t really need Biogenetics so its best to use your Bio Points into upgrading your Resistances so that you can go into hazardous zones without dying. This will allow you to find better Loot, which hopefully will enhance your Build even more. By bypassing Biogenetics completely you can gain 100% Resistances by the time you reach about Level 16 or 17, allowing you to go pretty much anywhere. 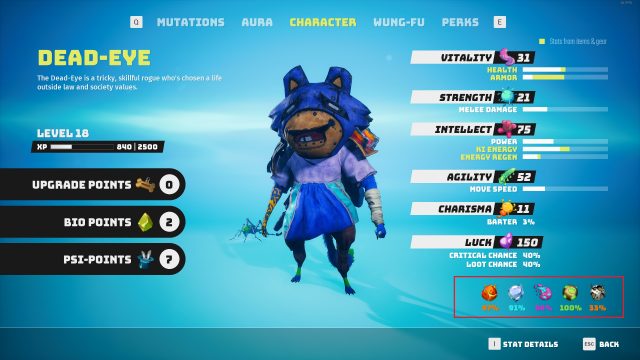 Much like Mutations, Psi-Powers are not particularly necessary for this Build, since they will not do tremendous damage with the way you are setup Attribute-wise. You can spend them anyway you like, and there are a couple like Blaze and Blink that are just good for mobility.

If you need parts in order to swap out Weapon Components or Upgrade your Weapon, be sure to Scrap extra Armor that you will never use. It’s one of the best ways to get large quantities of parts or materials to Craft with. And, don’t Upgrade until you are sure you have the Weapon you want, since it’s really expensive!

One weapon trait I have not tried out yet for sure, but could potentially double your damage with this Build is the Split trait. This allows your shots to deal damage when entering and exiting your enemy, as well as pass through targets and hit those behind. If this works Dead-Eye would be even stronger than it already is, and it would be good to have a least one weapon with this trait on it.

Lastly, though I have not tried it much myself, you should be able to play this same setup with a Shotgun if you prefer that type of Weapon. Shotguns are two-handed just like Rifles, so they should gain many of the same benefits from the Perks you select. If you find a good Shotgun, hang on to it and try it out to see if you like it!

Stay tuned for more Biomutant Build Guides, and be sure to check out the Biomutant Wiki if you have further questions about the game. What Build would you like to see next? How can I improve this Build? Let us know in the comments below!