Today we’re going to discuss some of the Character Creation and customization aspects of Biomutant, including Races and Classes, for the upcoming open-world Action Roleplaying game developed by Experiment 101 and published by THQ Nordic. With express permission from THQ, we’re allowed to share this with you about 3 weeks ahead of launch, and you can look forward to much more Biomutant content from us around May 25th. That’s all I can say for now about this, so let’s jump into Character Creation.

During Biomutant Character Creation you will get to customize nearly every aspect, from visual appearance all the way down to environmental resistances. You’ll get to select your “Breed” which is for all intents and purposes, your Race. You’ll get to select your Attributes, your Resistance, your Fur type and color, and finally your Class. We’ll handle these in order, so let’s begin with Breed first. 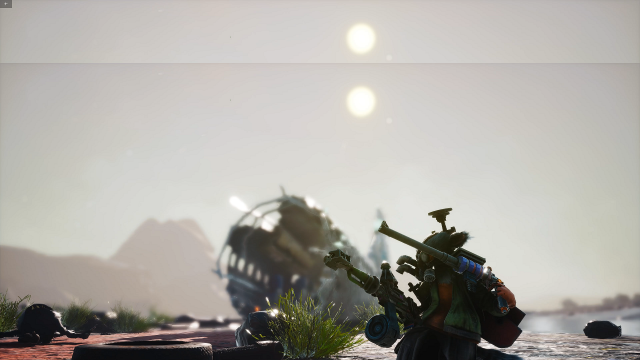 In Biomutant there are 6 Breeds you can choose from during Character Creation, and these are: Primal, Dumdon, Rex, Hyla, Fip and Murgel. These not only dictate some of your total stat values, but they determine the basic body type of your character. Since Biomutant does feature Classes, this means some Breeds work better with certain Classes than others. Let’s look into these a bit deeper and see what each does.

Primal Breeds have rather low Melee Damage compared to some others, and they don’t have particularly high Intellect or Health either, but they have the highest Critical Chance of all Breeds. This makes them well suited to ranged combat, or melee combat that relies more on speed than raw power. You might recognize this Breed in particular because it is the one used in promotional materials, including the cover and Atomic Edition of the game. 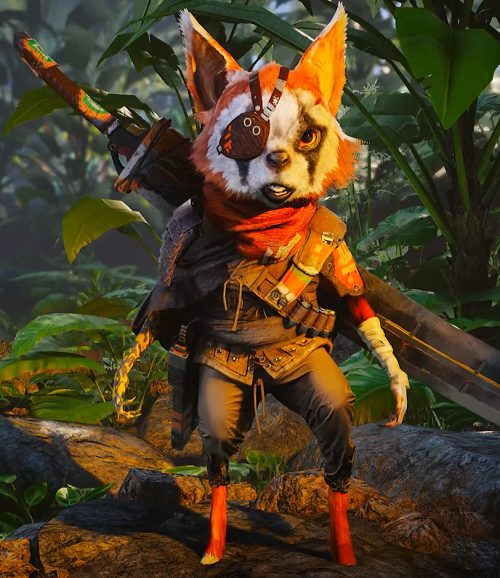 Dumdons have the highest Melee Damage of all Breeds, but they lack Health and Energy Regen. This makes them well suited to Melee combat, but much like the Primal Breeds they are better off playing in an agile more rogue-like nature than a straight up tank due to lack of Health. 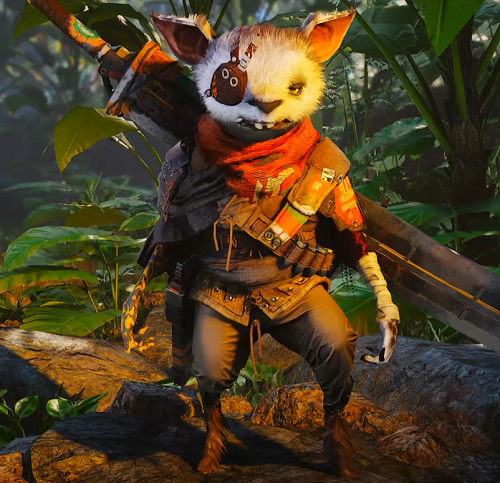 The Rex Breed is extremely well balanced, and is sort of the jack of all trades Breed because it has very high Health, decent Melee Damage, and relatively good Power, Ki Energy and Energy Regen. This allows them to play any Class effectively, and they are a solid choice for any new player. 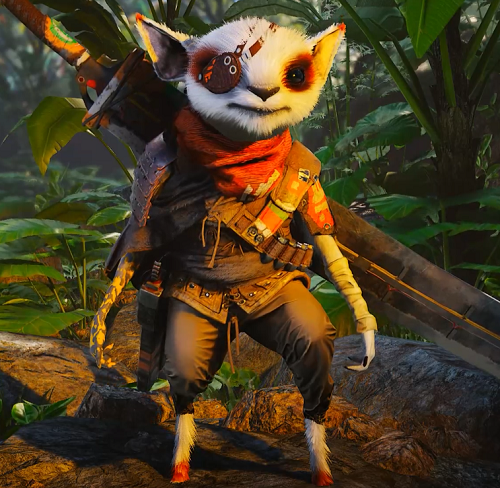 Hyla have the highest Health and Armor of any Breed in Biomutant, making them tougher to kill than others. They have less Power and Ki Energy than the Rex Breed, making them less suited to play Classes that use Psionics, and a better choice for Melee or Ranged Weapons. 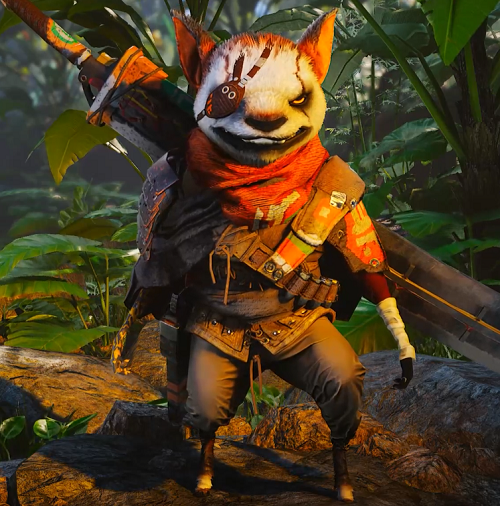 The Fip Breed has the highest Power, Ki Energy and Energy Regen of any Breed in Biomutant, making them the perfect choice to use Psionics. If you want to play a “mage” in Biomutant, then this is the right Breed for you. 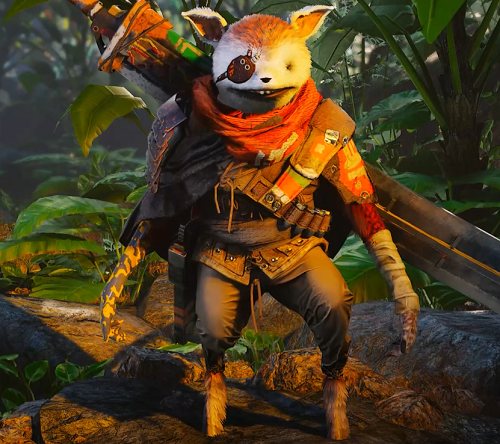 Murgels have similar stats to the Primal Breed, but they have less Critical Chance and excel at trading by having an increased Barter Stat. They also have the highest Loot Chance of any Breed. Gear and Equipment play a huge role in success or failure in Biomutant, so picking Murgel can be a tremendous boon. 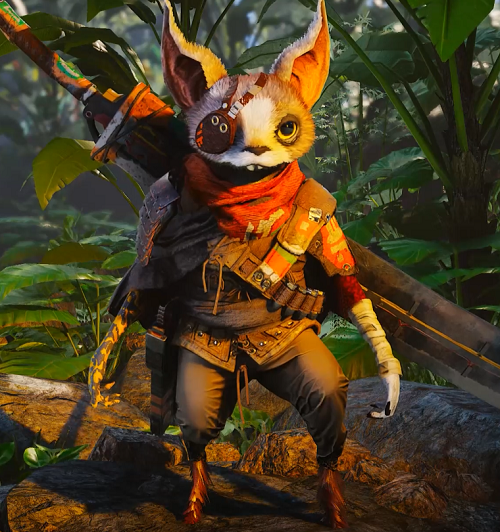 There are 6 Attributes in Biomutant, and each one affects other Stats of your character. These are Vitality, Strength, Intellect, Charisma, Agility and Luck. What’s really interesting about the way this is handled, is that your character will change visually as you decide which Attributes you wish to prioritize. Taking Strength, for example, makes your character look more buff. While increasing Intellect will make your head bigger. 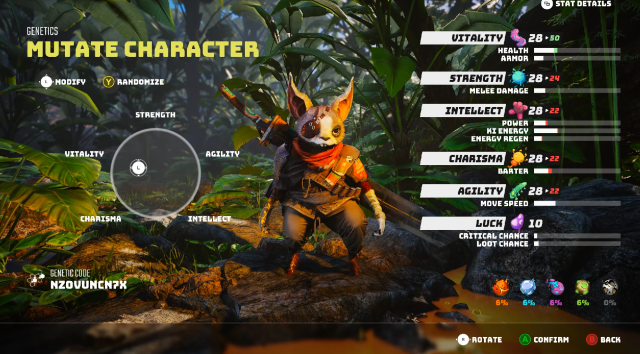 Let’s take a closer look at Attributes in Biomutant and see just exactly how they affect your stats:

Vitality directly affects the Health of your character, allowing you to take more hits before dying. Although the Armor stat is covered under this same Attribute, it appears it does not increase or decrease based on your Vitality. This would make sense, since you should be gaining this from your actual Armor.

Strength directly affects your Melee Damage, and there is no carry weight in Biomutant, so that is not a reason to place points into this Attribute. You want to increase this if you plan to Melee at all in combat, or if this is your focus.

Intellect affects your Power, Ki Energy and your Energy Regen. I believe Power is how strong your Psionics are, Ki Energy is how much total Energy you have, and Energy Regen is how quickly it recovers. This should mean Intellect is a fantastic Attribute if you plan to use Psionics, because they will hit harder, and you can cast them more often.

This Attribute directly affects your Barter stat, which I can only assume makes things cheaper to buy and things you sell more profitable. I don’t quite know how Charisma plays into dialogue choices yet, but I think it would be safe to assume the higher this is the easier it is to persuade people.

Because of the way the Attribute distribution is handled in Biomutant, you will not be able to place points exactly where you want them to go, but instead you must lean towards a playstyle. That is to say, if you want more Strength and Agility, you will by nature have less Charisma, Intellect and Vitality. For this reason, I highly recommend you decide what Class you want to play before finalizing this decision, as it will influence this heavily.

Once you have finished distributing your Attribute Points you’ll have to choose your Resistances, and much like Attributes, you won’t be able to assign these directly. Resistances prevent you from taking damage in hazardous areas of the game of the matching type of which there are 4: Heat, Cold, Radioactivity, and Biohazard.

If you’re exploring a Radioactive area, your Radioactivity Resistance will not only make it take longer for you to become affected, but will also reduce the damage you take once you are. The same is true for all other hazards, and Resistances. 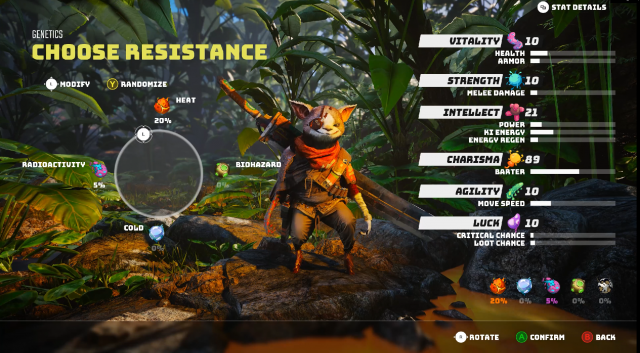 You will have a total of 25% Resistance, and you can spend this in any way possible using a system nearly identical to Attributes. Don’t worry too much about this aspect, as you will gain more Resistances later on from your Gear.

Once Resistances have been taken care of you’ll get to choose your fur type and pattern, as well as primary and secondary colors. This is obviously a personal preference, but there are many choices here, and you can spend some time on it. 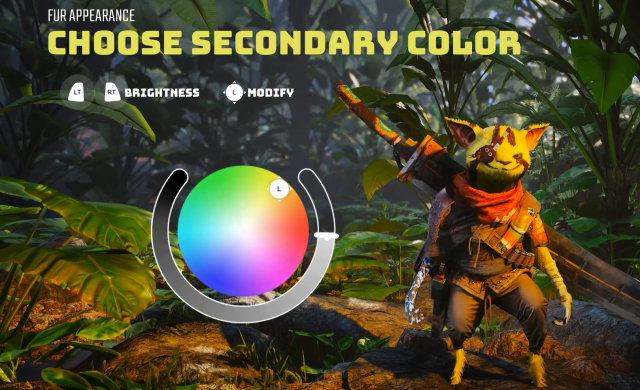 Once that is finished you will continue on to Class selection, which is the last part of Character Creation in Biomutant. There are 5 Classes to choose from, and each comes with its own unique Abilities that will affect your gameplay in some way. These Classes are: Dead-Eye, Commando, Psi-Freak, Saboteur, and Sentinel. Let’s take a look at these and see what they do.

The Dead-Eye Class increases your Critical Chance, and their Ability is “Perfect Reload“, which allows you to reload your Ranged Weapons instantly, and increases the damage of your next Magazine by 20%.

The Dead-Eye Class is a natural choice for those specializing in Ranged Weapons, and pairs well with the Primal, Hyla or Murgel Breeds. 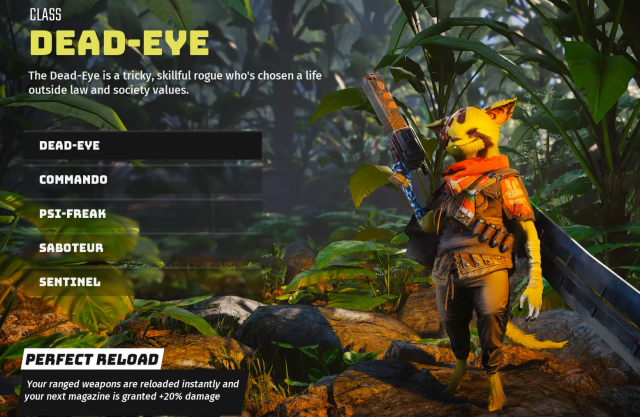 The Commando Class has less Critical Chance than all other Classes but the Saboteur, and their Ability “Fury” increases all Ranged Weapon damage to their target by 10%.

The Commando Class is also a great choice for those specializing in Ranged Weapons, and pairs with the Primal, Hyla or Murgel Breeds as well. 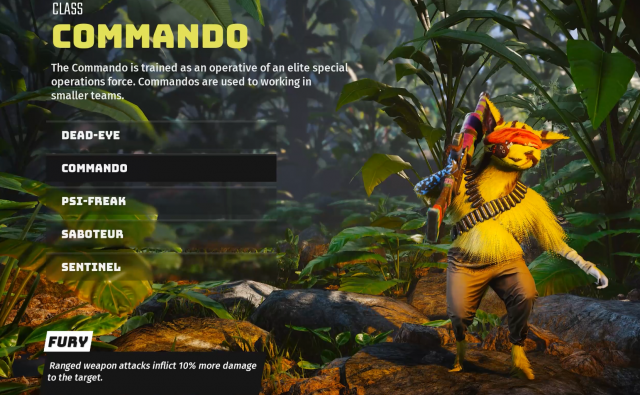 Psi-Freaks enjoy the same Critical Chance increase that Dead-Eyes do, but they gain “Spark Ball” for their Ability, which allows them to throw a lightning ball in a given direction damaging enemies in its path. Additionally, they gain “Megamind‘, increasing their Ki-Energy Regen by a further 20%.

The Psi-Freak Class is perfect for those wishing to use Psionics in combat, and pairs well with either the Fip or Rex Breeds. 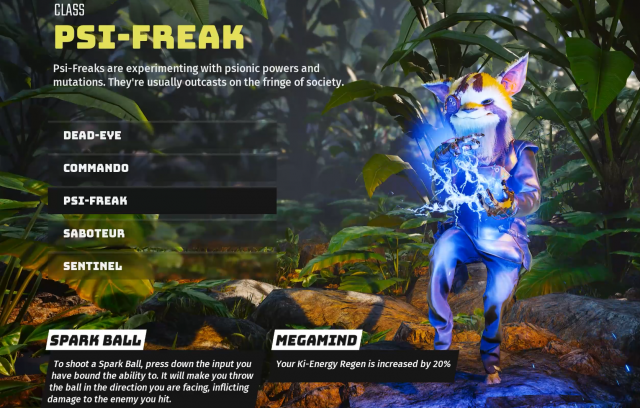 The Saboteur doesn’t get a bonus to Critical Chance, but instead has the Ability “Twin Silver Grip” allowing this Class to Dual Wield one-handed melee weapons. They also gain the “Hypergenetic” Ability, reducing their Dodge Energy cost by 20%.

The Saboteur excels in melee combat where they can take advantage of their dual melee weapons, and can use their reduced Dodge cost to really shine. This Class pairs well with Primal, Dumdom, or Hyla Breeds. 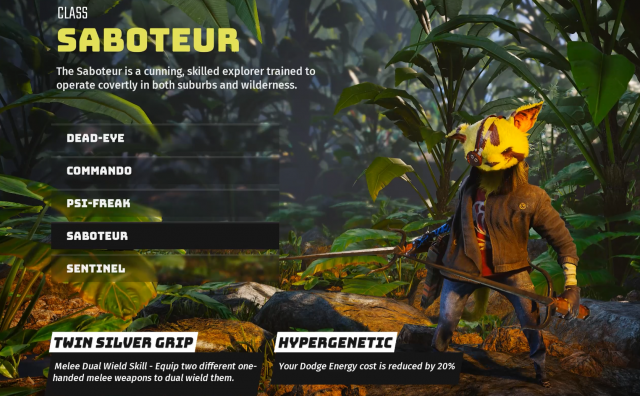 Sentinels have the highest Critical Chance of any Class in Biomutant. They also gain the “Toughness” Ability, which increases their Armor, making them harder to kill.

Since Sentinels don’t excel at any particular type of combat they are perfect for the player who wants to retain the flexibility of using any style of play, or Weapon they pick up. This Class can pair well with any Breed, but if you want the most flexibility, Hyla, Primal or Rex are all good choices. 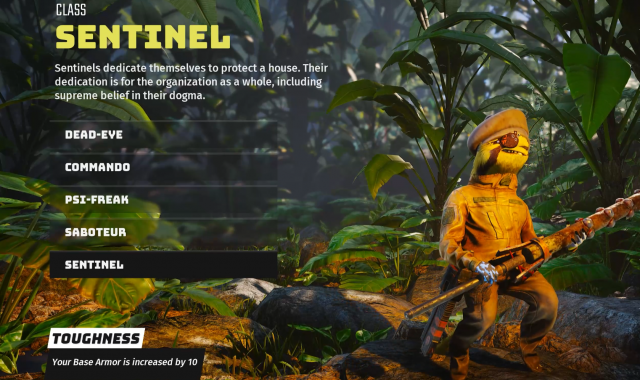 That’s all for our video on Character Creation in Biomutant. We cannot wait for the release of the game for Playstation 4, Xbox One and PC (via Steam) on May 25th, and we have much more content planned including a Review, a Getting Started Guide, and many Build Guides. So make sure you subscribe so you don’t miss out on those. Also, be sure to bookmark the Biomutant Wiki for all your specific questions about the game, like what Weapons and Armor there are, as well as Skills and Abilities.