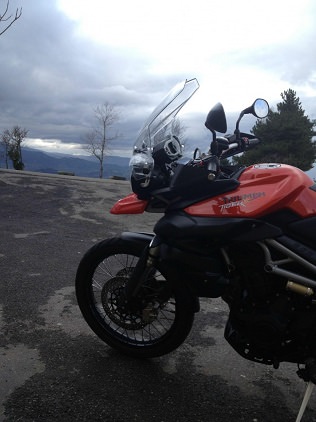 Alright guys and lasses, P is back, and he’s bringing some pretty nice moto-news along.
During this winter, I was searching for another big-enduro bike, due to the fact that the Cagiva, while being surprisingly fresh for a bike of her age (it’s a 1998 model), may not be the best bike, in the eventuality of planning a REALLY long trip (knocks on wood).

So, this whole winter, I’ve basically spent it looking for a bike (other than working a lot). My first choice was about buying a BMW 1200 GS.
Really reliable bike, great value, blablabla. Anyway. At some point I invited a friend at my place, in order to show him some of the used bikes I’ve found. He always rode BMW GS so he’s kind of an expert.
So, the day he came, he brought along a friend, who, after some chit-chat, said that he was about to sell his bike; Just out of curiosity, I asked him what bike it was: A 2011 Triumph Tiger 800 XC. I have to admit that I’m not really up to date with the Triumph brand. A friend of mine had a Tiger 1050 at some point, but…It didn’t catch my attention at all. The 800 though, was a different subject. After doing some research, both online and in various dealers, I did discover that the little Tiger was a very suitable bike, for my needs: comfortable enought to tackle a LONG trip, and off-road enough to be able to a tackle a proper enduro trail, rather than just a gravel-ish one (as opposed as too many of nowadays ”enduro” bikes). So, after seeing the actual bike a couple times, I decided to buy it. It also came with a full set of hard luggages, and a top case (identical to the one I have installed on the Cagiva, but…whatever). Ok now, time to technical (won’t take long, I promise).
The Little Cat sports a 800cc, three-cylinder, four stroke engine, capace of an output of roughly 95 hp. More than enough to be able to pop up a wheelie in second gear, by clutching a little (Now kids, don’t do this, okay?). The engine is a small wonder ”per-se”. It’s…just great. And that means something, coming from someone who is mostly used to ride with 160hp, V-twin engines under his…err…bottom. This little ”Triple” engine has a lot of torque, almost like a V-twin, and a great ”stretch”, as it can easily rev up to 10.000rpm. No wonder though, as it’s an upgraded version of the little 675cc already equipped by Triumph on her Daytona and Street Triple models. Another thing that REALLY surprised me, is the gearbox+clutch combo. The gears kick in one after another smooth as silk, and the clutch lever is most likely the softest I’ve ever pulled (certainly softer that the Ducati one).

But in the end, how does the Little Cat performs?
Surprisingly well, I have to admit.

I’m usually riding superbikes, so a big enduro, just by the sheer size of the bike alone, is kind of intimidating. Consider that most of the time, the dry-weight of the whole ”package” is around 200kg.
Well, the Little Cat blew me away. It’s agile, maneuverable (This being a word in English that I’ve never been comfortable with, you’ll see in the video at the end), and the weight is perfectly distributed, making it easy as drinking a glass of water to take on every kind of bend the road will throw at you, also being helped by the good braking system made by Nissin. All in all though, I’m really loving this new addiction to my bike garage.

I will test her properly in the upcoming months, both in off-road and on long range trips (I’m going back to the Stelvio this year! Wooo! Can’t wait).

Also, I will be upgrading her with some Touratech special parts, like crash bars, engine protections, and so on, in order to make her even more capable of taking on a proper off road. But before I leave, here are two short clips of the first (short) trip I had with the Little Cat.

PREMISE: I took a half day off work the moment I saw a sunny day outside. But obviously, the moment I started to climb the mountain road, the weather turned to bad. And it was freezing cold! Also, before I forget, sorry in advance for my poor English!

Alright then guys, see you (hopefully) soon…I may have interesting news.

Read the rest of Bikes are Awesome Series

6 comments on “Bikes are Awesome 6 – The big news and the Little Cat.”