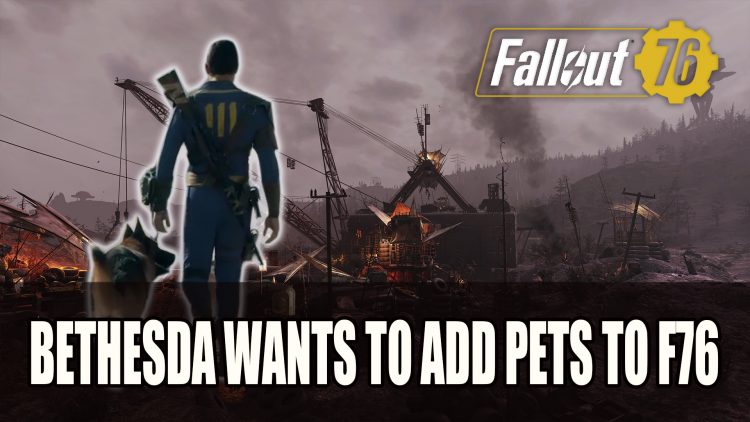 Bethesda have announced that they will be adding pets to the online post-apocalyptic game Fallout 76.

Fallout 76 has a number of additions to the game since it’s launch, including Wastelanders free update which added human NPCs to the game and now they are planning to add some furry companions.

In a Reddit AMA with project lead Jeff Gardiner and lead designer Ferret Baudoin, they revealed some new features that will be making their way to the game. One of those new features will be pet companions:

Edible ones? I kid. Now that we have our companions system in the game, we are looking to add pets as well.

The most recent update Wastelanders added a number of companions to the game recently, some of which can even be romanced. In past renditions of Fallout, players also got to have pets as companions. It looks like they will be making a return in the online title.

Another feature highlighted in the AMA was the Mole Miner NPC, a fan-favourite will be joining the game this May. Bethesda has also teased the arrival of The Brotherhood of Steel:

Another upcoming addition will be the Legendary Perk system which will be rolling out this summer:

This summer we’re adding legendary perks into the game. These perks are highly powerful and coveted, and players will unlock new slots to fit them in starting at level 50. You can also scrap all of your extra cards to ranks these perks up, and, when you roll alt characters these slots will be unlocked on them as well.

Fallout 76 launched with a lot of controversy, main concerns being its empty world and not what a lot fans of the series had expected. But there have been a few updates since then, adding human NPCs which was something missing from the launch, new modes and private servers. It looks like Bethesda are continuing to add content, but has the launch left a bitter taste for those who tried it? What do you think about the recent addition of Wastelanders? Let us know in the comments below.

Fallout 76 Wastelanders is now available on Playstation 4, Xbox One and PC.

For more news be sure to read next Fallout 76 Wastelanders New Trailer Shows NPCs And Factions and Fallout 76 Coming To Steam. You can also check out a roundup of recent RPG news in Top RPG News Of The Week: April 26th (MHW Iceborne, Digimon Survive, Torchlight 3 And More!).