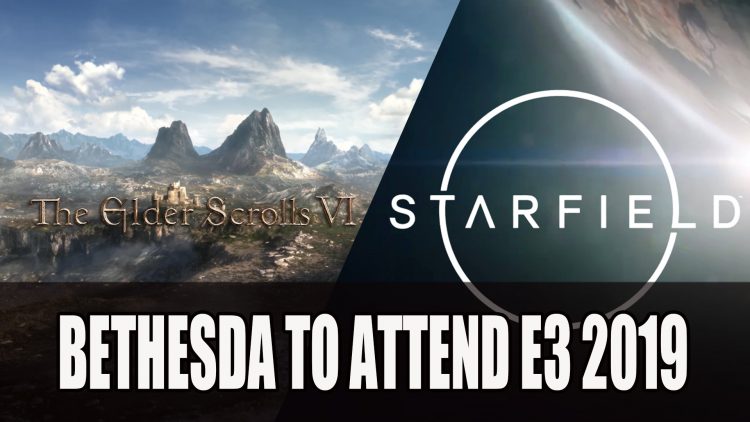 The developer Bethesda Softworks have confirmed they will be returning to E3 this year and will be holding a press conference.

In a post on Twitter Bethesda have shared a “save the date” for June 9th as they will be making their return to E3 2019, holding a press conference at 5:30pm PST. We might still be months away but developers and companies have already started to share whether they are in or if they are out. With CD Projekt Red sharing they are going with fans anticipating more Cyberpunk 2077, but Sony opting out for the first time in its 24 year history.

Start speculating! Refresh @WalmartCanada. Most importantly… save the date! #BE3 is coming on Sunday, June 9th (5:30 PM PT).

More details — including registration — are coming soon. Can’t attend? We will be streaming the whole thing live! #E3 https://t.co/6No81maSXz pic.twitter.com/EIMQjznqsT

What they will plan to show E3 goers is still much a mystery, with the exception of DOOM Eternal which is slated to release sometime this year. But if you look closer at the image shared in their tweet, #BE3 in displayed in twinkling stars which could be pointing at Starfield. Further clues include a dragon flying in the background which could be related to Elder Scrolls VI. To have a better guess of what they could be showing, we’d have to take at look at last year’s reveals.

It was at last year’s E3 when Bethesda released more details about Fallout 76 as a multiplayer survival as well as the release date. The mobile game Elder Scrolls Blades was also announced. But one of the bigger reveals was Elder Scrolls VI being confirmed to be in the works as they shared a teaser trailer, but not much else was revealed about the title. A short video was premiered featuring a rolling hills and mountain backdrop, no real giveaways in terms of where the next entry in the franchise would take place or what it would be about.

With Zenimax trademarking “Redfall” towards the end of last year, and being the parent company of Bethesda, we could speculate this might be something to do with the next Elder Scrolls in the series. However, none of this has been mentioned by Bethesda up to now. We will have to see at E3 whether they are ready to give us more details about ES6.

A new IP Starfield was also featured, a single player RPG set in space but its release seemed to be quite far in the future, as Bethesda shared they were looking at “next generation of gaming technology” hinting possibly at the next Playstation or Xbox console. This title has long been a vision for Pete Hines, Vice President at Bethesda, who has been wanting to make such a title since the 90’s. Showing the priority of the game, it was explained at E3 that once Fallout 76 would be released, a lot those who worked on the project in Maryland and Montreal will move onto Starfield. It’s been over 25 years since Bethesda has a new IP, so this has given fans high expectations for sci-fi themed RPG. Whether Bethesda will be ready to show more about Starfield is unknown at this point.

What do you think Bethesda will be showcasing this E3? Let us know in the comment below.

If you want more E3 content be sure to read next Cyberpunk 2077 Will Be At E3 2019 and Reggie Fils-Aime Says Attending E3 Is An “Outstanding Opportunity” For Nintendo. You can find out more about why Sony Opts Out Of E3 2019.