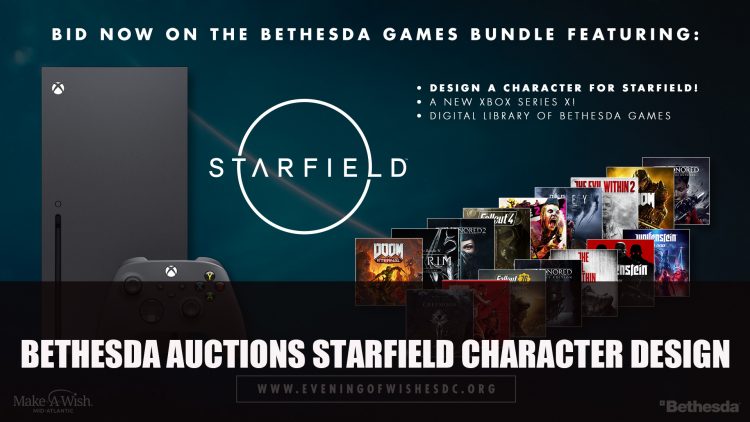 Bethesda have announced they are auctioning off a chance to design your very own character for Starfield, plus other goodies such as a game console and games.

Starfield details are still slim, with rumours here and there, the sci-fi RPG is currently in development. However now Bethesda have announced they are holding a charity auction for a chance for a lucky bidder to design their very own character for Starfield.

The winner of bid will not only get to design a character for the game, but win a chance to work with Todd Howard himself and the Bethesda Games Studios team. The prize also includes a new Xbox Series X and a number of Bethesda games including The Elder Scrolls 5, Elder Scrolls Online, Fallout 4 and more. The charity auction is described below:

Everyone loves creating their own version of the hero of their games, but very few players get to actually BECOME a character within a game itself. The winner of this package will work with the award-winning team at Bethesda Game Studios, including executive producer Todd Howard, to create a character for their highly anticipated upcoming game, Starfield!

Exactly how the designing process will go about is unknown, but I suspect it will be more to do with creative input than actually having to know anything about game design. But either way it’s not every day you get to say you helped design a character that joined a Bethesda new IP, the first in about 25 years.

We’re delighted to provide the opportunity to design a character for Starfield to one lucky winner – as well as an Xbox Series X and a bunch games. https://t.co/t11jBSc1Z6

The auction is live now and benefits @WishMidAtlantic so they can continue granting Wishes❤️ pic.twitter.com/zg7SKtzuM8

The character will be created within three months of the auction, which takes place on February 28th. If you have some cash to splash and want to help a good cause, that will benefit the Make-A-Wish Mid-Atlantic, then you have until Sunday to put in your bid. The current bid is set at $6,200, with $200 increments.

For all the latest on Starfield drop by our Starfield wiki.

For more news be sure to check out next Rumour: Starfield Release Window Leaked and Sony State Of Play Set For February 25th.