In this article we continue with our series on the basics of 5th Edition D&D, which Baldur’s Gate III will be based off of, as confirmed by Swen Vincke of Larian Studios. We will be taking a look at Feats, Weapons and Armor, and how they apply to things mentioned in our previous article, as well as the differences between them now compared with earlier editions of Dungeons & Dragons.

In our previous article, we took a look at Proficiency, Skills & Advantage/Disadvantage and how they play a huge part in the mechanics of 5th Edition D&D. They are fundamentals that all Baldur’s Gate 3 players could benefit from knowing, so if you are not familiar with them, and haven’t read that article yet, I suggest you begin there before reading this one. Otherwise, we’ll begin with Feats, and how it affects the game in 5th Edition. You can also visit our DnD Guide section.

Feats are technically an optional mechanic found in D&D 5th Edition, and not all campaigns use them, and is really a player/Dungeon Master preference. However, they have been confirmed to be in Baldur’s Gate III so I’ve included them here.

Feats, for all intents and purposes work like “Talents” (DOS) or “Perks” (Fallout) in other role playing games, and they give the character a very specific bonus. In 5th Edition (Baldur’s Gate 3) they are obtained a bit differently than in 3.5 Edition D&D or Pathfinder. 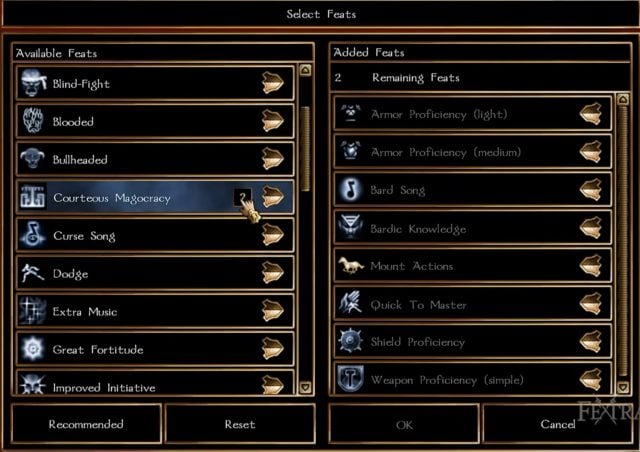 How To Gain Feats

In 3.5 D&D (Neverwinter Nights), players can select 1 Feat during character creation, and then they gain 1 Feat every 3rd level (3,6,9,12,15,18). There are certain additional Feats some Classes like Fighter & Races like Human get, but that’s the basics of 3.5 Feats.

In Pathfinder 1st Edition (Pathfinder Kingmaker), players can select 1 Feat during character creation, and then again at every odd level (3,5,7,9,11,13,15,17,19). And just like 3.5 D&D, certain Classes like Fighter & Races like Human will gain additional Feats, but again that’s the basics of it. 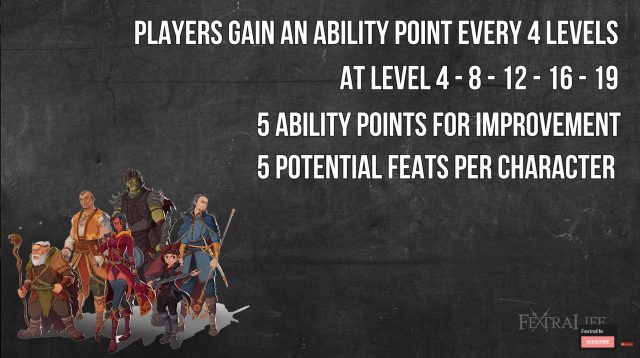 This might seem like a simplified system, and indeed it is, but keep in mind that there are several Feats in 5th Edition that grant you an Ability Point in a specific Ability, as well as other bonuses. For example, if you choose the Weapon Master Feat you will gain 1 point to spend in either Strength or Dexterity, in addition to Proficiency with 4 Weapons of your choosing. Or for example, the Actor Feat which grants you 1 increase to your Charisma score, in addition to Advantage on Charisma Deception and Charisma Performance checks, as well as the capability to mimic the speech of other characters. This makes these types of Feats extremely important, and players should consider grabbing Feats that give them both an Ability Score Improvement as well as other passive benefits.

An important thing to remember is that not all Feats in 5th Edition can be used by everyone, just like 3.5 and Pathfinder, and many have requirements that must be met in order to obtain them. Some require an Ability Score of at least 13 in a specific Ability, like Inspiring Leader or Defensive Duelist, and others have specific requirements like Elemental Adept and Heavily Armored. Keep these things in mind and plan ahead. If you’re having trouble with this aspect, don’t worry we’ll have Class and Build Guides coming that will help you out with your specific setup, where these things are discussed in more detail, so stay tuned for those! 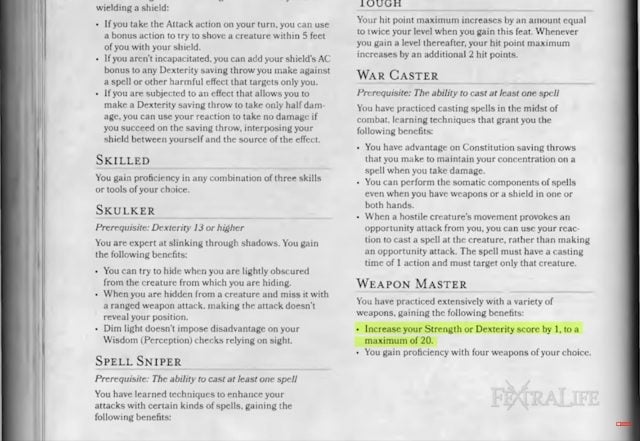 Weapons are a huge part of D&D and make up the bulk of combat, since not every character can cast Spells, but they can all use Weapons. In this section we’ll take a look at how Proficiency is handled when it comes to weapons, how damage is calculated, and what Weapon Properties do and what they mean. First let’s cover Weapon Proficiency. 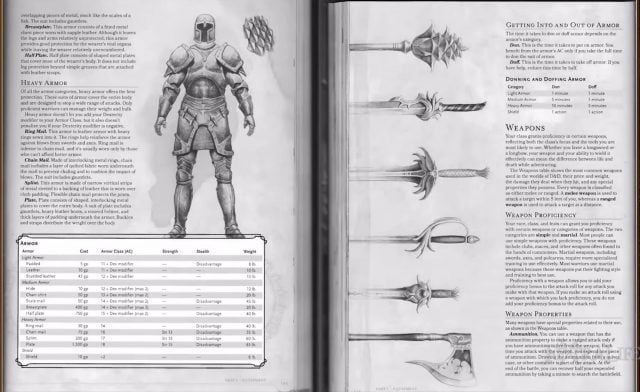 Whenever you attack an enemy in 5th Edition D&D you make what is called an “Attack Roll”, which I’ve already covered in the first guide of this series, and again later in the second guide. This Attack Roll is affected by your Weapon Proficiency, so let’s take a look at how this plays out in BG 3.

Weapons in Baldur’s Gate 3 are handled a bit differently than in Neverwinter Nights or Pathfinder Kingmaker, where you either have a -4 Attack Roll penalty or you cannot even use a Weapon when you don’t have Proficiency with it. In D&D 5th Edition you can use any Weapon you wish on any character, but you will not gain your Proficiency Bonus when attacking if you aren’t Proficient with said Weapon.

You won’t be penalized for using a Weapon you aren’t Proficient in, but the likelihood of you hitting the enemy is reduced, because you don’t get the added benefit of Proficiency. If you remember your Proficiency Bonus begins at +2 and increases every 4 character levels to a maximum of +6. This means Proficiency is less important at lower levels, but much more so as you progress the game and your Proficiency Bonus increases. In short, you want to use Weapons you are Proficient with whenever possible.

Please note that unlike D&D 3.5 Edition and Pathfinder, there are no Weapon Focus or Weapon Specialization Feats, and that in 5th Edition your Attack Roll is modified by your Proficiency Bonus and Ability Modifier instead. This allows you to use many more Weapons effectively than in either 3.5 or Pathfinder, which is important since you have less Feats on average than either of these rule sets. 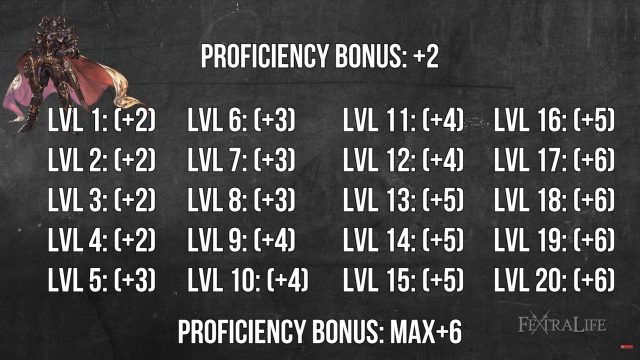 Unlike Pathfinder or D&D 3.5, there are not a bunch of Feats that give you Proficiency with Weapons in 5th Edition D&D. This means you will only have Proficiency with the Weapons of your chosen Race and Class, with the one exception being if you take the Weapon Master Feat, which allows you to become Proficient with any 4 Weapons of your choosing. Keep this in mind when creating your character, because more often than not you’ll be sticking with Weapons that fall under your character creation Proficiency.

Every Weapon in 5th Edition D&D has a damage die that is rolled when you successfully make an Attack Roll, and this damage is then applied to the target along with your Ability Modifier. For example, if you attack with a Greatclub you will roll an 8 sided die, take that result and add your Strength Ability Modifier to that to get your total damage for your attack. Not every weapon uses the same die, and some are much better than others.

Additionally, each weapon has a damage type, which is either: bludgeoning, piercing or slashing. This is important to note because some enemies have damage reduction against certain types of damage, and it’s possible to gain Damage Reduction yourself, such as by taking the Heavy Armor Master Feat. Pay attention while in combat and swap to a different weapon with a different damage type if yours is ineffective.

Nearly every Weapon has a Weapon Property in 5th Edition D&D, and those that don’t are few and far between. The following is a list of Weapon Properties with a brief description of what they do. This is not the full description, but rather a condensed version to give you the general idea of what these things do: 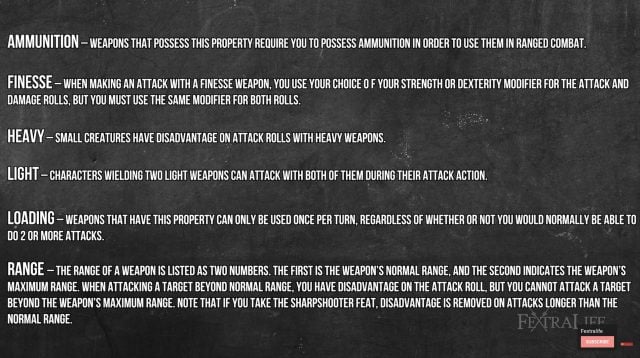 Armor Class (AC) in D&D is what protects you from any attack that uses an Attack Roll, spells included. The amount of protection you gain depends on how heavy of armor you are wearing. For example Padded Armor gives you 11 AC, and Chain Mail gives you 16, which means that enemies must reach a total of 11 or 16 on their Attack Rolls in order to Hit you.

Let’s say your Rogue (Tolbien) has 18 Dexterity, which gives him a Dexterity Modifier of +4. He wears Studded Leather Armor which has a base AC of 12. His AC would be 12+4, giving him a total AC of 16. If he then swaps this out for Hide Armor, which is Medium Armor, he will have a base AC of 12, but will only gain +2 from his Dexterity Modifier, giving him at total AC of 14. This is a bad move for him, and he should look for at least Half Plate before using Medium Armor, because its base value is 15 and 15 +2 = 17. 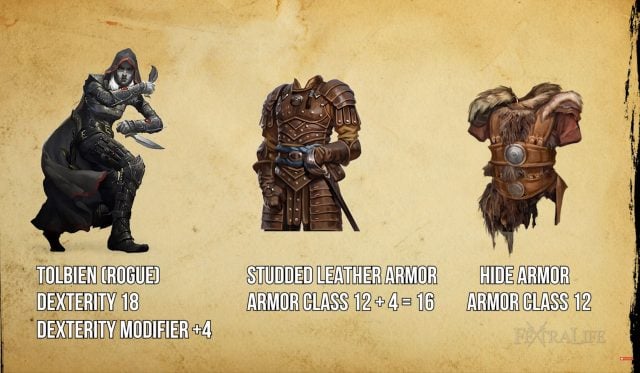 Unlike Weapons, Proficiency in an Armor type is a must have or you’ll be facing some staunch penalties. Characters who wear Armor they aren’t Proficient in will have Disadvantage on any Ability Check, Saving Throw, or Attack Roll that involves Strength or Dexterity, and they can’t cast spells. However, the upside here is that characters CAN cast spells while wearing Armor they are Proficient in (even Heavy Armor) with no penalty to Attack Rolls or arcane spell failure, which is a HUGE change from D&D 3.5 and Pathfinder.

Stealth and Movement in Armor

The only other two things to pay attention to when wearing Armor is whether or not they give you Disadvantage on Stealth checks, and when using Heavy Armor whether there is a Strength requirement or not.

Generally speaking, you want to use lighter armor on characters with high Dexterity, because lighter armors don’t penalize Stealth in any way (with the exception of Padded Armor). And, you want to use heavier armor on characters with high Strength because they will not incur a movement penalty, which would slow them down. Keep these things in mind and plan accordingly when making decisions about your character. 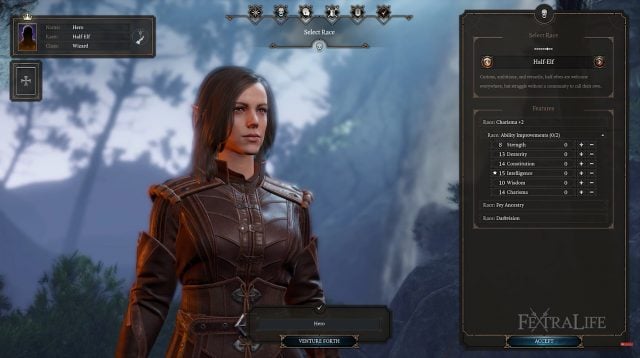 Knowing these things about Feats, Weapons and Armor will help you tremendously when building your characters. It will allow you to focus and specialize each to do exactly what you need them to do, resulting in more success and less frustration.

This was the third of several articles on the basics of 5th Edition D&D, basics that will apply to Baldur’s Gate III and prepare you for what’s to come hopefully next month, in Early Access anyway. For more be sure to check out our DnD Guide section. The purpose of this article was to try to explain fundamental mechanics that BG3 players could benefit from knowing, helping them to make better decisions about their character development. In the next article I will be covering Classes, Class Features and Multiclassing and what role they play in 5th Edition, and likely Baldur’s Gate 3.