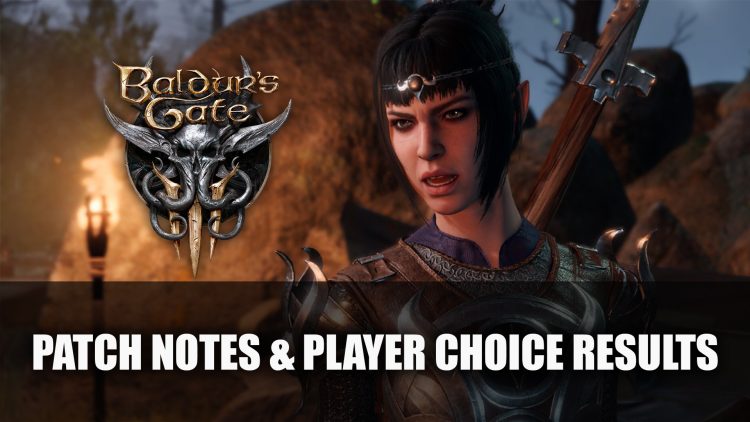 Recently Baldur’s Gate 3 developer Larian Studios posted a community update which shared patch note updates and the results for some of the choice players made in-game.

Baldur’s Gate 3 released on Steam Early Access and Stadia early this month, unleashing the RPG game to the masses. Larian Studios are continually improving the game while it’s in Early Access, much of these improvements comes from feedback straight from the players, helping to enhance the game experience.

The latest patch is a big one, which not only adds general fixes to cinematics, which completely change the view and overall feel of the scenes, but they have entirely “re-shot” a certain song.

Along with the patch note fixes, the developer has shared some interesting results for in-game player choices for BG3. According to the post the dog in the game received 400k pets, that’s a lot of pets from players. Other interesting stats revealed included only 1.37% of players opted to sleep alone, I guess romancing NPCs was by far the more popular option, with Gale coming out on top with 33%. Shadowheart came in second with 31%. If you wanted to know how many people leapt to their death in The Underdark, there were 40.79% who didn’t make it as they jumped without Feather Fall, ouch.

Larian also revealed the results of who they sided, a little spoiler here so skip this part if you don’t want to know what happens in-game. Most decided to take the side of the Tieflings, with 74.85% of players deciding to stand with them, while 25.15% opted to side with Minthara.

Several improvements have been made to the game including sound settings to help the performance of lower spec PCs, adjustments to timing of some tutorial messages and if you listen to other player’s dialogs, it will now correctly show the dice rolls. Other improvements include that party member can now cancel their spell prepare state when switching to another character. You can check out the full list of improvements/changes below: