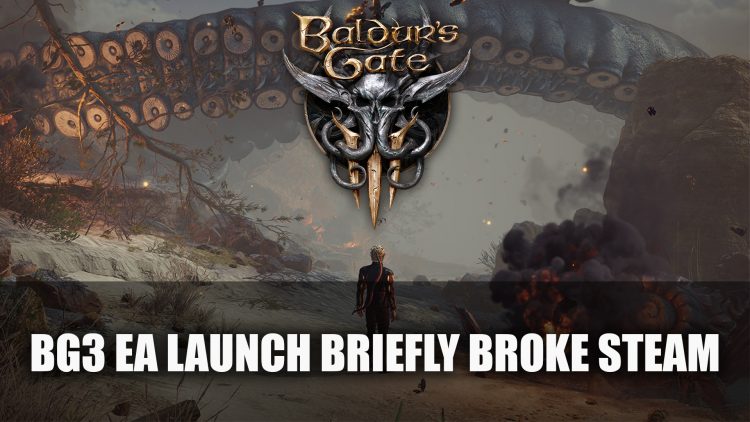 Seam had a lot to handle when Baldur’s Gate 3 finally launched on early access this week, causing issues in purchasing the game.

Baldur’s Gate 3 has been long await by fans, and it finally came to Steam early access this week, with so much interest it briefly caused Steam to have issues. Those who tried to purchase the game upon launch were met with error messages or “attempting a lot of purchases in the last few hours” according to PCGamesn.

While it isn’t 100% certain that the issue alone was just due to the Baldur’s Game 3 EA launch, but over on Steamstat.us, it shows a couple of dips in connections over the 24 hour period including when BG3 went live.

It appears we broke steam. Thank you!

Swen Vincke the boss of Larian Studios shared on Twitter that “sales are insane – this is just Early Access you all. We just wanted to have a nice little community to iterate with. Now what are we going to do?”

If you’re still unsure whether to pick Baldur’s Gate 3 in early access you can check out our Baldur’s Gate 3 Early Access First Impressions: Should You Get BG3 EA? which should answer your questions on where the game is so far.

Baldur’s Gate 3 early access version currently has 16 races/subraces as well as 6 classes to choose from. It offers players around 25 hours of content which is designed for multiple playthroughs. You can either create your own customisable character and choose your party for single-player, or join up friends with up to 4 players in multiplayer.

This amount of traction is highly understandable as we’ve been having a blast streaming it over on our Fextralife Twitch channel, where Twitch integration has a brought a whole new interactive experience to the game.