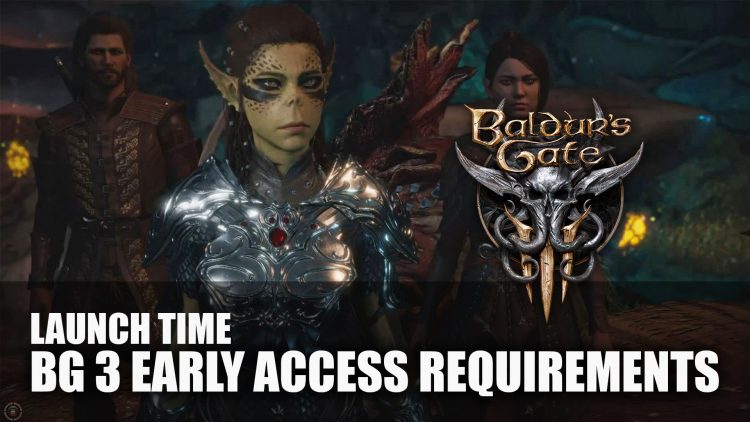 Larian Studios are releasing Baldur’s Gate 3 into early access on October 6th, on Google Stadia Steam and GoG. They have also announced Mac will also be gaining BG3 Early Access. If you’re wondering about harddrive requirements and when it will go live in your timezone read on.

Baldur’s Gate 3 will be sliding into early access tomorrow (or depending on your timezone today) for Google Stadia, PC and now Mac. Larian Studios have announced it will be available on Mac starting at 10 AM PT.

We’ve got a big surprise for Mac fans. Baldur’s Gate 3 will also launch on Mac, tomorrow 10am PT! Now, Mac fans will very much be part of the Early Access journey. pic.twitter.com/7SwhlFswc5

But that’s not all the news for the early access version, they have also revealed that you will need 150GB on your harddrive as a minimum requirement, which is over double the 70GB previously listed estimate. According to Michael Douse who respond on Twitter, BG3 is actually 80 GB but having 150BG free would be “good for u”. You can find the full requirements in order to play Baldur’s Gate 3 below including minimum and recommended:

As for when the game will go live, it will launch on Tuesday 6th October at 10 AM PT. Here it is by timezones:

This week Larian also revealed that the early access version will have 16 races/subraces as well as 6 classes to choose from. The early access version offers players around 25 hours of content which is designed for multiple playthroughs. You can either create your own customisable character and choose your party for single-player, or join up friends with up to 4 players in multiplayer.

Larian also recently shared that Baldur’s Gate 3 will have a Twitch extension, meaning viewers can vote on different decisions your character will make during your playthrough, providing a whole interactive experience. Larian also plans to have cross-saves between platforms, and you will need to sign up for a Larian account on the official Larian website.

According to a tweet last month, Baldur’s Gate 3 early access will cost $59.99 USD, which is the same as the price when it will officially launch. You will fully own the game, and it helps support the developer, they will be taking feedback from the community while it is in EA:

Also, the price will be $59.99. Don’t feel pressured to buy it during EA. It’s not going to disappear, and neither are we. Eventually, it’ll be a very large game. Though EA is 25 hours of one play-through, the final game will be *does brain math* a lot longer.

If you’re eager to see Baldur’s Gate 3 in action don’t forget to drop by our Fextralife Twitch channel, to find out what time we’ll be live, visit our Twitch schedule.

For more news be sure to check out a rundown of recent RPG news here in Top RPG News Of The Week: October 4th (Demon’s Souls, Scarlet Nexus, WoW And More!). Don’t forget to check out our Baldur’s Gate 3 guides so you’re prepared for EA launch day.