In this Baldur’s Gate 3 Patch 4 article, I’m going to briefly talk about the new Druid Class and its Subclasses as well as analyze how the improvements, User Interface, Quality of Life, balancing changes, and cinematics will affect your experience of the game.

The first thing we’ll cover in this breakdown article is the Druid Class. This is the 7th Class in Early Access, but the first to be added since Early Access began last October. When will we see more Classes added? Time will tell!

The biggest addition to the latest patch is the Druid Class joining the currently available Ranger, Wizard, Warlock, Fighter, Cleric, and Rogue Classes. As a Druid, you can choose from two Subclasses, namely the Circle of the Land and Circle of the Moon. Circle of the Land makes you more attuned to nature as you gain unique perks and Spells based on the region you choose. On the other hand, Circle of the Moon boosts your ability to transform into creatures with Wild Shapes. You will also have exclusive access to the Polar Bear shape. Think of Druids as a cross-breed of Wizards and Clerics since they can perform powerful offensive Spells and heal you and your party as needed.

Alongside this, a list of Druidic Spells have been added such as Goodberry that grant you berries to regain a portion of your HP and Thorn Whip to damage enemies as you drag them closer to you. 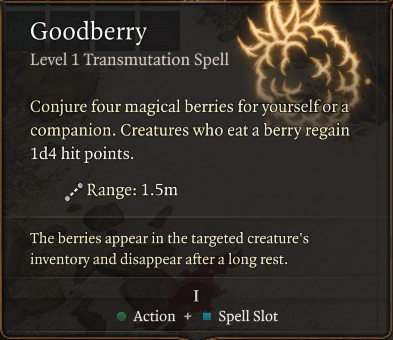 Furthermore, there are new surprises narrative and combat-wise that await in the Druid’s Grove so it’s definitely something to look forward to. For a more detailed discussion of the Druid Class, be sure to check out our current video. We will also release an in depth Druid Build guide so stay tuned for that.

With Patch 4 comes the addition of Loaded Dice and a Flee button. Loaded Dice gives you the option to reduce the randomness of your rolls. This means that you will no longer receive a continual series of Natural 1s or 20s when you make a D20 roll. Note that this is only applicable for Attack Rolls, Saving Throws, and rolls when conversing with NPCs. This will not impact your Damage Rolls, which accounts for different dice rolls depending on your Weapon, Action or Spell. Loaded Dice is active by default so if you want to continue rolling like before, you will have to change it in the game’s Options, Gameplay and then deselect “Weighted Dice”. 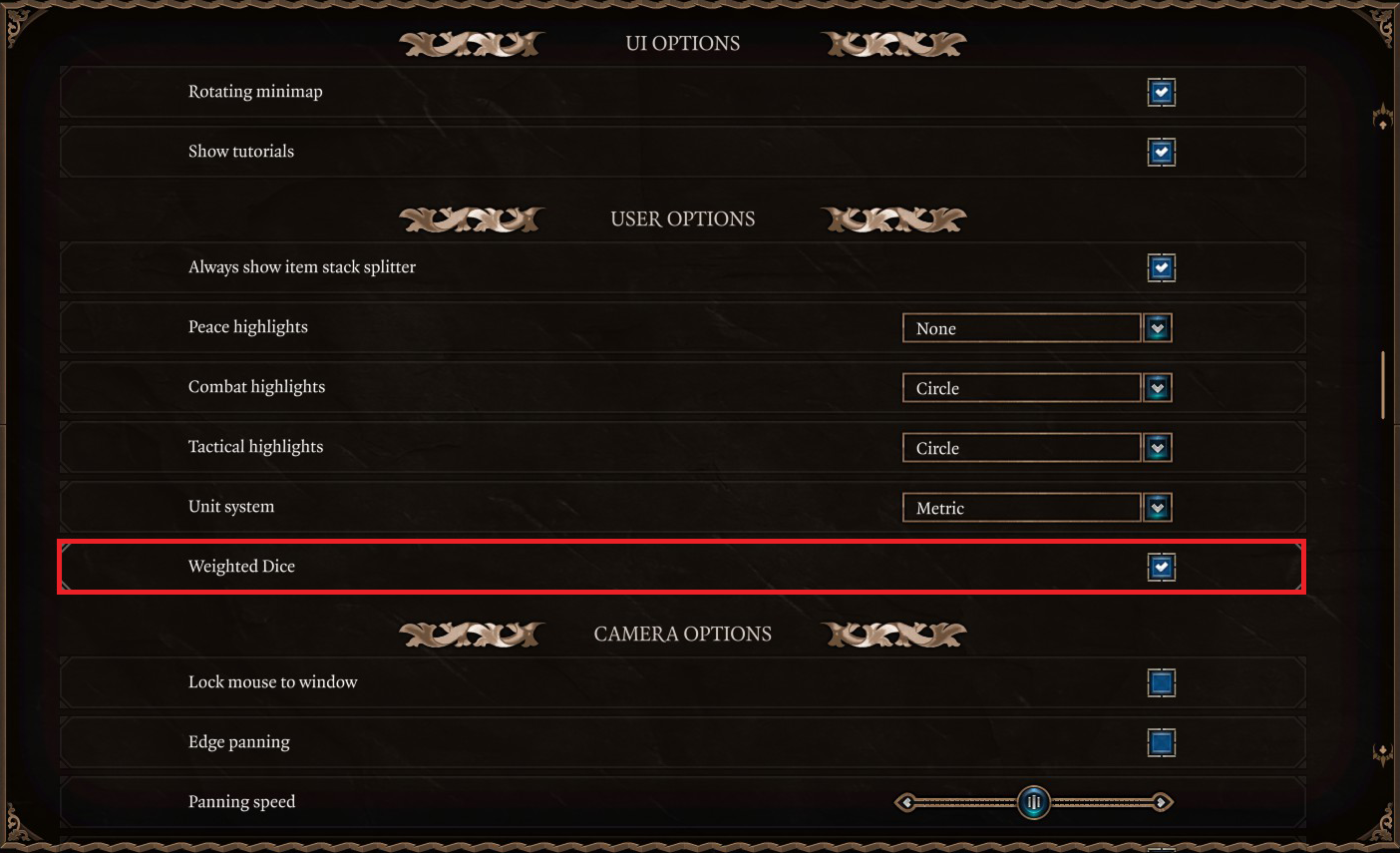 Flee is finally a part of combat. You can escape from sticky situations by clicking the Flee button, which is located on top of End Turn. Upon fleeing from combat, you will be teleported to the nearest discovered waypoint. However, there is a requirement that you have to be at least 27 meters away from the enemy and only the character who activated Flee will be able to escape. Therefore, you cannot rely on one character to salvage your entire party from danger.  What I did notice is how long the distance between you and the enemy should be to activate Flee, considering that the default Movement Speed is only 9 meters per turn for most Races except for Dwarves and Halflings. I do hope Larian Studios shortens this distance to around 18 meters because some of your characters may end up dying just so you can save what’s left of your party. As such, I would currently consider confronting enemies rather than fleeing from them. 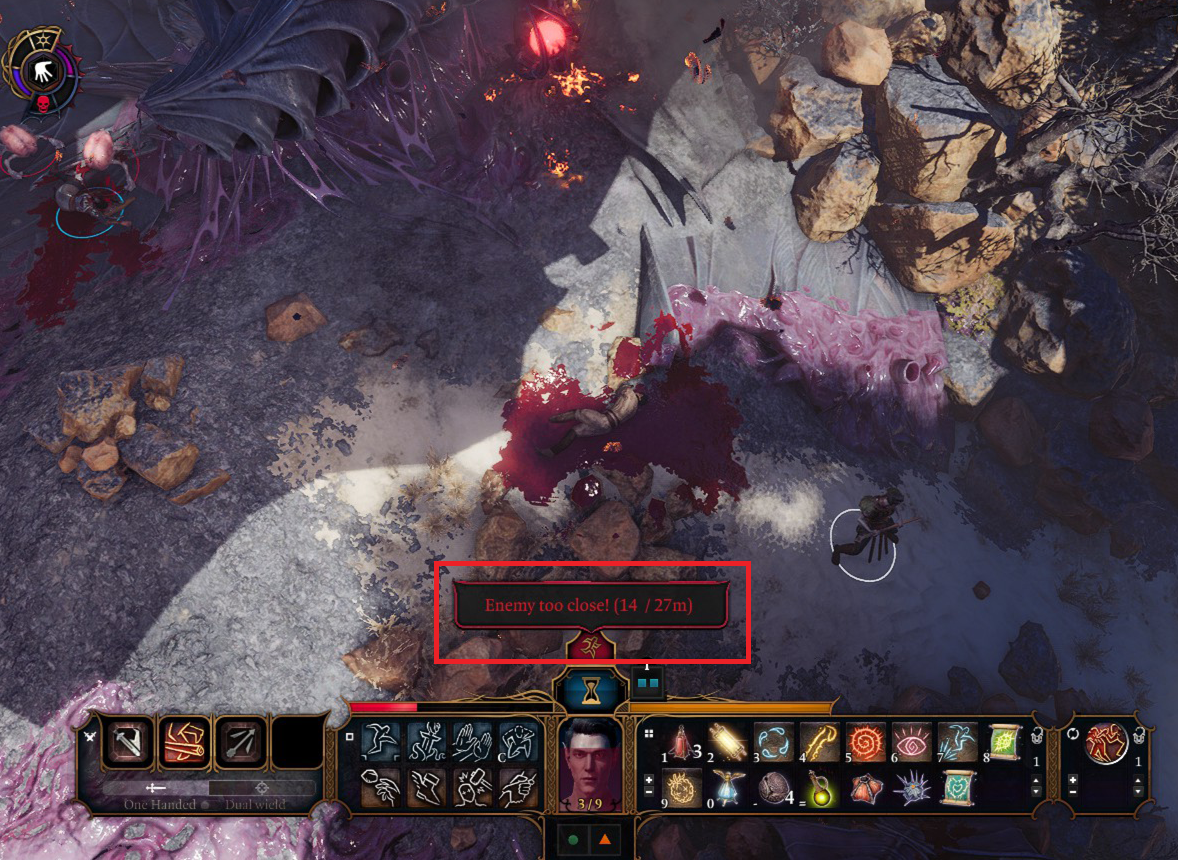 One big improvement in the recent update is Long Rest where all Companions, may they be included in your current party or not, will have their HP, Actions and Spell Slots restored in full. This saves you the ordeal of engaging in Long Rest multiple times especially if you forget to replenish your substituted Companion’s resources. In the past, when you wanted to switch between Companions to bring outside of Camp, the character you swapped out and left behind would not receive the benefits of Long Rest.

The recent patch brought a lot of balancing changes and fixes but I will only be highlighting the major ones when it comes to gameplay.

In general, damage resistance has been tweaked so that the minimum damage you receive is 1 instead of 0. For instance, if an enemy were to deal 1 Poison Damage and you have your Ring of Poison Resistance equipped, you will only receive half of it rounded down, which is equal to 0. But now you will instead be certainly hit with 1 Poison Damage.

The Classes that have received buffs to their Actions and Spells are predominantly Warlocks and Wizards. Warlocks get a buff with modifications done to Devil’s Sight, which you can choose from a list of Eldritch Invocations when you reach level 2. The range by which you can see in Darkness with this Spell has been increased from 18 to 24 meters, similar to a Drow’s Superior Darkvision. While Devil’s Sight is active, you will also be immune to the Blind condition you get from being in the dark. In addition, summoned Imps and Quasit now have Darkvision. This will now help you survey shadowy areas. It will also prevent these summons from missing hits in the dark due to their improved vision.

One of the most favourable updates is the Wizard’s Abjuration School Subclass as it gets a massive buff to Arcane Ward. The protective barrier now scales with the Abjuration Wizard’s level and Intelligence. The computation is as follows:

For example, a level 2 Wizard with 16 Intelligence will now get a total of 7 Arcane Ward HP, which is more than double the amount of temporary HP you used to get with the old value at 3. 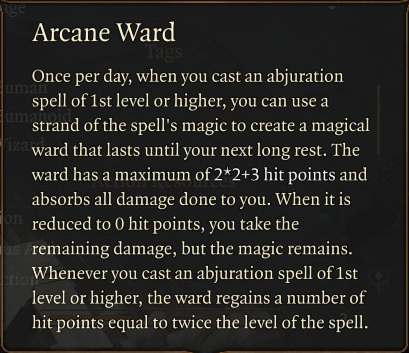 In relation to other Spells, Witch Bolt will now make a surface electrified. This will inflict the target with Shocked, which prevents that character from performing Reactions such as Opportunity Attack while giving them a Disadvantage when they make Dexterity Checks and Saving Throws.

Meanwhile, level 2 Charm Person is now a Spell that allows you to charm at least 2 targets at a time within its AoE. Before this patch, it wasn’t an AoE Spell so you could only charm 1 target per turn.

Patch 4 mostly comprises bug and stability fixes such as fixing crashes when Long Rest gets interrupted or when Gale is killed by a summoned creature. Fights against Spiders will also be theoretically more difficult since they no longer identify webs as Difficult Terrain. They can reach you much quicker than before since their Movement Speed will no longer be reduced by half. Another noticeable fix they implemented is that your Invisibility will no longer be nullified when you perform self-casting Spells.

Items you intend to loot can now be sorted by Latest, Value, Weight and Type. This helps you to easily identify the items you want to get especially if there are a lot to choose from. You can even toggle the inventory button beside the sorting option in order to check if you already have them or if you want to loot it regardless. 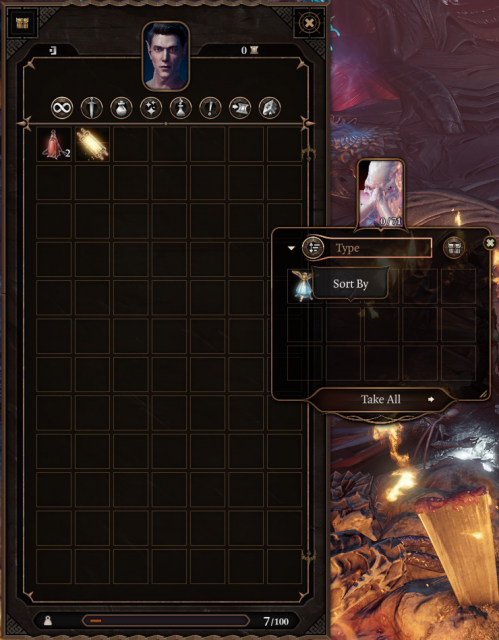 When it comes to disabling traps, you can now easily do so by double-clicking on them as long as you have a Trap Disarm Toolkit in your inventory thereby saving you time. In the previous version, you had to right-click on the trap and then click “Disarm”.

In addition, you can now cast Spells by selecting their respective character portraits instead of actually clicking them. This is similar to what Larian has done in their previous game, Divinity: Original Sin 2, and it’s definitely a welcome change given how accessible these portraits are.

You can now view your friend’s inventory, Spells and Equipment. You can get items from their inventories or fill it with useless stuff in order to reduce their Movement Speed. A lock function will be added in the future so your friend can prevent your kleptomaniac tendencies. However, you cannot change their Spells, Armour and Weapons. It was also mentioned that Character Sheets are visible but there is a bug that prevents you from viewing these even when selecting your friend’s character portrait.


Hovering over an elemental surface now shows the amount of damage you’re dealt with if you step on it while in combat. For example with a Fire surface, you will receive 1d4 Fire Damage. These surfaces and the conditions you receive are now displayed as tooltips in the combat log. 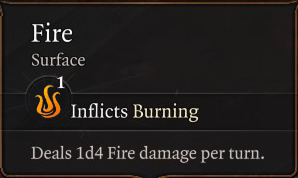 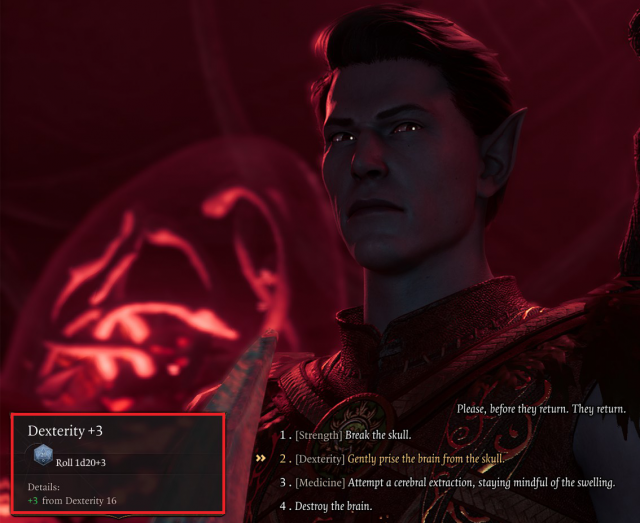 In the Character Sheet, your Health and Armour Class (AC) now display your base scores as well as any added bonuses that you gain from your Ability Modifiers, Equipment and level. So for instance if you’re wearing a Druid Leather Armour, you immediately know how to get your total AC of 14 because of the base 10 AC and +3 Dexterity Modifier. The Base Speed and Initiative are included as well as your Action resources that describe what each Action is for, thereby making the UI more beginner friendly. Alternatively if you want a summary of the resources available to you in combat, you can simply hover your mouse over your character’s portraits, which will show your Health, Base Speed and all available Actions.

The Torch button has also been added in the hotbar. You no longer have to manually equip it or use your Dip Bonus Action on a Fire surface to light it up. 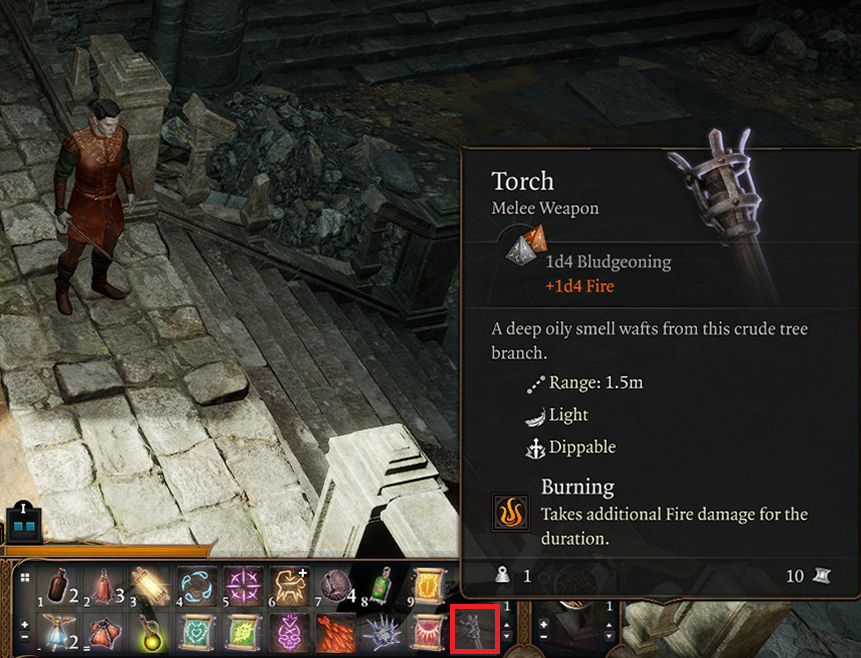 Additionally, in the Journal section, pressing “Show on Map” now focuses at the center of the particular quest you selected.

Character reactions have improved depending on the dialogue. Previously, their facial expressions and gestures would be noticeably blank when another NPC is explaining something dire but now they react appropriately. You will see them disgusted at the Intellectual Devourer or shocked at sudden loud noises. This adds to how immersive BG3 has become since your characters can actually convey emotions well upon witnessing what’s happening and changing in front of them.

The overall narrative cinematics have also been tweaked to illustrate a more polished and darker version of the game. It’s not a huge departure from the previous version although you will notice some changes to the shadows and lighting.

Specifically, Speak with Dead has been vastly improved with added lighting and animations that show a living and breathing corpse ready to answer your questions.

There are some issues that I encountered after the release of Patch 4. First is launching the game, which would immediately crash. As a workaround, you need to verify your game files by right-clicking BG3, going to Properties, Local Files, and selecting “Verify integrity of game files”.

Second is the different experience points Companions gain depending on when you meet them. For example is with Shadowheart, whom we did not have in our party when we were in the Nautiloid Ship. When I reached level 2 after the Intellect Devourer fight at the Ravaged Beach, she did not level up with me. In fact, she still lacked a couple of experience points. What’s odd is when I recruited Astarion, he immediately leveled up putting three of my characters at level 2.

Patch 4 will be the last extremely large patch, in terms of download size. Succeeding updates and bug fixes will be divided into manageable chunks so that the downloads will be much smaller. You can view the complete list of the patch notes via this Steam link.