In this Baldur’s Gate 3 Companions Guide we’re going to take a look at Shadowheart in BG3 Early Access, and which Spells, Feats, and Equipment to use, and how to improve your reputation with her. We’ll also discuss which are good Companions to take with her, and what your party might look like depending on which Companions you know for sure you want to use.

There are five Companions you can acquire in Baldur’s Gate 3 Early Access, and you can bring three of them along with you at a time. You can travel back to your Camp at any time and swap them out to your liking, and it’s worth noting that Companions in your Camp gain experience the same as those in your party. Let’s take a look at Shadowheart. She is probably the first Companion you will acquire.

Shadowheart has arguably the worst Ability Point spread of all the Companions in Early Access. Her -1 Dexterity Modifier lowers her Armour Class by 1 point. Her Constitution is 1 point away from extra HP, and +1 to Constitution Saving Throws (which helps with maintaining Concentration). And her Strength is ok, meaning she misses with a modest amount of melee attacks. This relegates her to mostly Spellcasting, which means you need to Long Rest usually after each encounter to keep her Spells replenished. Luckily this is possible almost all the time, but you should get into a habit of doing so if you are using her.

At Level 4 you can add 1 point to Dexterity to remove the AC penalty, as well as add a point to Constitution to gain that extra HP and +1 on Constitution Saves. Adding 2 points to Wisdom is also an option to improve her Spellcasting, but I feel is less effective in general than the +1 DEX & +1 CON. If Early Access didn’t cap out at Level 4, it would be worth considering the Heavily Armoured Feat, since your Dexterity Modifier is not added when wearing Heavy Armour. 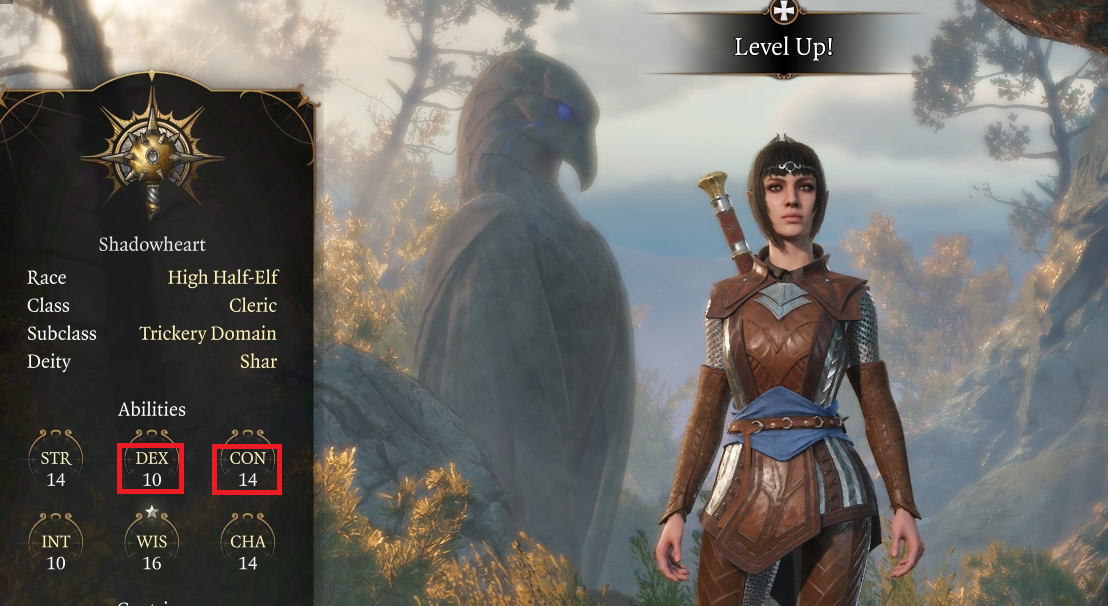 Shadowheart is Proficient in Sleight of Hand, Stealth, Religion and Insight. She has -1 and +0 Ability Modifiers to these Skills, making them nearly useless to her, since other characters will have Proficiency in these Skills, while having much better Ability Modifiers. Additionally, she has rather good Charisma at 14, but no Proficiency with Persuasion, Intimidation or Deception, which is a waste. This makes her mediocre at best with just about any Skills she uses in Early Access, unless you take the Skilled Feat at Level 4 instead of Ability Improvement.

Shadowheart is a Trickery Domain Cleric, which means she can cast all Cleric Spells, and she gains the following Domain Spells during Early Access: Charm Person, Disguise Self, Pass without Trace, and Mirror Image. She also gains the Actions: Blessing of the Trickster, and Invoke Duplicity.

Charm Person allows you to prevent a target from being hostile towards you, and you also gain Advantage on Charisma checks vs. the target, allowing you to more easily pass dialogue checks if you can cast it on the target before speaking with them.

Disguise Self allows you to change your race to any of the Races found during Character Creation, including the option to change your gender. This can come in handy if you know the person you are about to speak with likes or dislikes certain Races or genders more or less.

Pass without Trace allows your whole party to gain a significant increase to their Stealth checks, as long as they remain somewhat close to Shadowheart. This condition requires Concentration, which means you can’t cast other spells with Concentration without overwriting it, but it can be useful for setting up Sneak Attacks and ambushes, or sneaking by difficult areas like the Minotaurs.

Mirror Image increases your Armour Class by +3 for each of the three illusions cast around you. This gives you a total of +9 Armour Class, which is an insane amount, but an illusion vanishes each time you avoid an attack. This Spell is great for tanking, since it makes you really hard to hit.

Blessing of the Trickster allows you to give a party member Advantage on Stealth checks until they rest, which can help you sneak up on enemies, or to slip past them. This also requires Concentration, so you cannot use Pass without Trace at the same time. Note that Shadowheart will have Disadvantage on her Stealth rolls if she uses Scale Mail Armour or Githyanki Half Plate, so consider sticking to the Chain Shirt if you plan to use this on her specifically.

Invoke Duplicity allows you to cast an illusion that grants you and your party Advantage with attacks rolls against any target nearby. It requires Concentration as well, and can only be used once per Short Rest. It’s great when there are many enemies, or when you know an enemy will move to a certain location.

Shadowheart should be wearing Medium Armour and ideally a Shield to gain the most Armour Class she can. She has no Fighting Style, so there is less reason for her to dual wield or use a two-handed weapon, especially since she can use a Shield and Spellcast at the same time. Her spell Mirror Image makes her damn near un-killable in combat if you can keep it up, and even without it she can get up to 19 AC with Shield of Faith and Scale Mail Armour +1, which isn’t terrible for Early Access. However, this does give her Disadvantage on Stealth rolls, so consider Chain Shirt +1 if you use her in a more Stealthy nature. 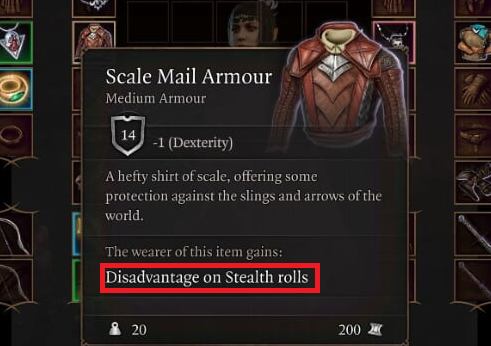 Shadowheart has 14 Strength and 9 Dexterity, which means she will need to melee in order to deal damage with Weapons effectively, since ranged weapons need Dexterity for their hit chance and damage. She can only use Simple Weapons, so I suggest purchasing a Mace +1 or a Handaxe +1 from Dammon in The Hollow (Druid Grove). The +1 really helps with hit chance and damage. Coincidentally, you can get Scale Mail Armour +1 from him as well. Note that you won’t see some of these items in his inventory until you reach level 3.

For Accessories, there are several that work well for her. Hellrider’s Pride is not a bad option because it gives the target resistance to attacks when you heal them, but it doesn’t work on yourself. Broodmother’s Revenge works outstanding on Shadowheart since it really ups her damage, and since she can use Healing Word as a Bonus Action, she can heal herself and attack in the same turn.

In this section I’ll show you how you can gain approval with Shadowheart, as well as how you can gain disapproval if you wish. These are not all the ways possible in Early Access, but they are the ones we have accumulated on the Wiki so far:

I suggest not taking Shadowheart in your party if you yourself are a Cleric, if you already have 2 melee characters in your group, or if you’re using Lae’Zel (since they hate eachother). It’s best to treat  Shadowheart a melee character for all intents and purposes, even though she has some range with Guiding Bolt and Sacred Flame.

Sacred Flame targets the Dexterity of the enemy, which makes its chance to hit much lower in Early Access on average than a melee attack or any other spell that target’s the Armour of the character. For this reason I advise not using it unless you absolutely have to, or when an enemy is prone and you gain 100% hit chance. Try to use Guiding Bolt, Inflict Wounds, or a Main Hand Attack with your melee weapon when trying to deal damage. 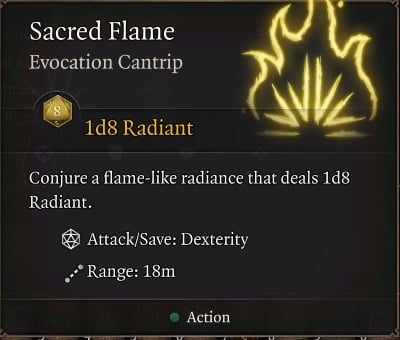 Guiding Bolt is considered a Ranged Attack, meaning it will gain hit chance from being elevated or when you have Advantage, like when you’re in Stealth. Try to use it when you are high or hidden for best results, and remember that it is cast with Disadvantage if you are Threatened in combat.

Use Inflict Wounds to deal damage when in melee combat if you want to cast a spell (instead of Guiding Bolt). Not only does it do more damage, but it is considered a melee attack, so it isn’t cast with Disadvantage when Threatened. Additionally, if you cast it on a Paralyzed target then you will automatically Critically Strike with it, dealing 8d10 instead of 4d10. Hold Person + Inflict Wounds = Win. 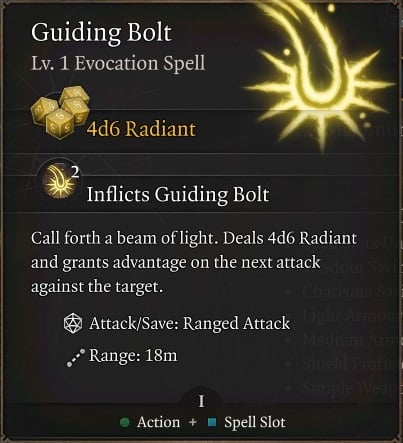 Use Healing Word to pick up downed party members. Any healing will allow them to get back up and continue fighting, and Healing Word has a very long range!

The Guidance Cantrip is exceptionally good, and can be cast as many times as you want without resting. Cast on the character that handles your dialogues before they trigger them to add an extra d4 to their rolls. Or use it on the character handling your lockpicking or trap disarming to help ensure success. Just remember that it requires Concentration, so you will override any other spell that you are currently Concentrating on. 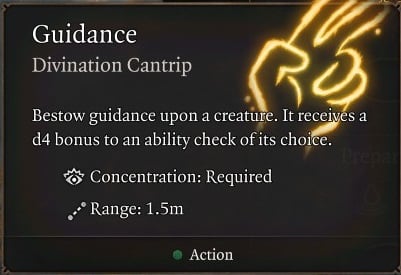 Lastly, Shadowheart makes a good candidate to use the Gloves of Power and the Absolute’s Warboard if you make her get the brand of True Soul Gut. This is because she is likely to use a Shield anyway, and she will attack with her weapon more often than other casters. Consider having her speak to True Soul Gut if you wish to use both of these items effectively without causing Bane on yourself.

Stay tuned for more Baldur’s Gate 3 content as we take a look at Companions and Builds, and be sure to drop by our Twitch channel if you have questions about the game. If you need something specific, check out our Baldur’s Gate 3 Wiki which is being worked on night and day!