Fighters can become Eldritch Knights at Level 3 in Baldur’s Gate 3, and when they do so they gain access to some Wizard spells. In Early Access they will only be able to gain a maximum of 3 Level 1 spells, which isn’t a huge amount. However, these can be used hit targets from far away, or to do devastating AoE attacks when in melee range. 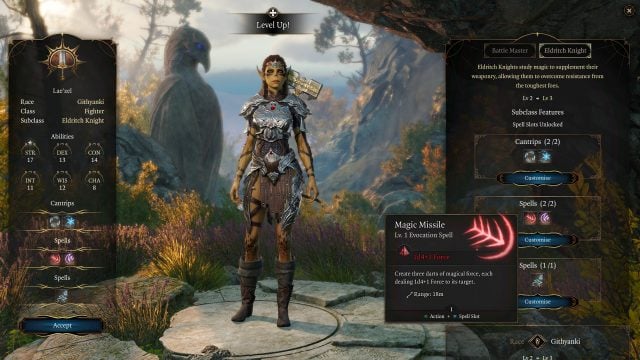 Probably the biggest upside of playing an Eldritch Knight in Early Access, compared to a Battle Master, is the ability to use Magic Missile (which can’t miss). Magic Missile is one of the most OP spells you can get in Early Access, because things like low lighting don’t affect your hit chance with this spell, nor can the target save or use their Armor Class to protect them. Additionally, you can choose up to three targets with it, allowing you to finish off low HP enemies while still dealing damage against your primary target.

In this section we’ll take a look at how to setup your Eldritch Knight during Character Creation for the best results. You don’t have to follow this to the letter, and it’s likely this will change at full launch of the game. However, this will hold you in good stead during Early Access.

What Background you choose here isn’t super important since Strength only benefits Athletics, and Constitution has no Skills related to it. However,  taking a Background that boosts Intelligence Skills is not a bad idea. These are: Arcana, History, Investigation, Nature and Religion.

There are two really good Races for Eldritch Knight that I can recommend for Early Access, and those are Shield Dwarf and Githyanki. Shield Dwarves will allow you to gain 17 Strength and 17 Constitution, which means when you hit Level 4 you can have 18 in both of these, which is fantastic.

Githyanki allow you to get to 17 in Strength easily, and increase your Intelligence allowing you to get to 16 here. They also have a lot more options when it comes to Skills. The choice is up to you, but you don’t really need much Intelligence during Character Creation for your Eldritch Knight in Early Access, and I’ll explain why in the Abilities section.

For Skills you can take any you want that are available to you, but you should try to match these to your Abilities. Again, Intelligence-based Skills work well, as do Dexterity ones if you have some points into Dexterity. These are: Acrobatics, Sleight of Hand, and Stealth. You’re not likely to use Stealth much as an Eldritch Knight, so I suggest Acrobatics or Sleight of Hand if you want Dex Skills.

Eldritch Knights need Strength for their Attack and Damage Rolls with melee weapons. They need Constitution to give them a large HP pool, and they need Intelligence to increase the likelihood that their spells will connect. However, there are a couple things about Early Access that change how one might build and Eldritch Knight, for Early Access only. 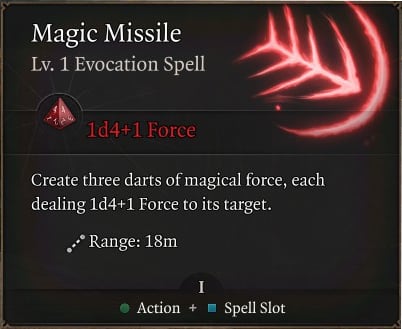 First, the limited pool of spells means that you are either going to cast Magic Missile, an AoE Conal spell like Burning Hands, or some sort of buff like Expeditious Retreat. Of those three things, only Burning Hands requires Intelligence to be effective, and it has limited application. This of course doesn’t take into account what Cantrips you acquire, and if those are offensive then Intelligence becomes much more valuable to your Eldritch Knight.

Second, you can gain an item about 5 hours or so into Early Access that when equipped sets the Intelligence of a character to 18. This item is called the Warped Headband of Intellect and is dropped by the Ogre Mage in the Blighted Village. Once you have this any and all Ability Points invested in Intelligence will become worthless. 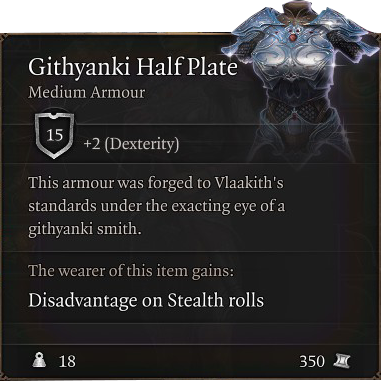 And Third, I have not found any Heavy Armor in Early Access that provides more protection than Lae’Zel’s Githyanki Half Plate, which allows you up to +2 Dexterity bonus. This means that investing points into Dexterity is worth it for Eldritch Knight in Early Access, though this may not be the case at live release.

At Level 2 your Fighter you will gain Action Surge once per Rest that will allow you to take a second Action. This is extremely powerful and you should use it when you know you can hit something, or to burst a deadly target down quickly. Save it for when you need it.

You will also get to choose 1 passive from a pool of 6 that will affect your Fighter’s style of play. You can pick an offensive one or defensive one, but the only one you shouldn’t choose is Archery since you won’t be using your Bow much once you become an Eldritch Knight.

When you become an Eldritch Knight at Fighter Level 3 you’ll get to select some Wizard Spells. First you’ll get to choose 2 Cantrips, and these have a variety of effects. However, I strongly suggest you select at least one long range one for those times you cannot reach enemies, because when you are close up you will melee more often than not, making close range spells a bit redundant. Some good choices are: Acid Splash, Chill Touch, Fire Bolt, or Ray of Frost. Additionally, it’s not bad idea to take the Dancing Lights Cantrip either, since it allows you to create light which can help with your hit chance in dark places. 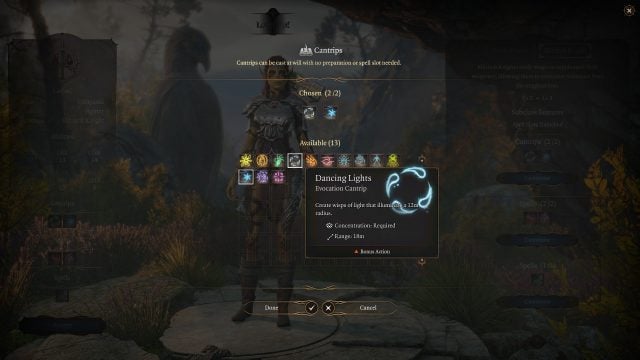 Then you’ll get to pick 2 of 6 Wizard Spells and here I highly suggest you take Magic Missile and an AoE Conal spell like Burning Hands or Thunderwave. Witch Bolt is also not a bad option, because it does damage more than once if you maintain Concentration. Concentration may be interrupted if you are struck, but you will make a Constitution Saving Throw if so, and Fighters have Proficiency in Constitution Saving Throws, as well as high Constitution. This means that you should be able to maintain Concentration more easily that some other Classes or Builds, as long as you aren’t completely surrounded by enemies that will attack you.

Then you’ll get to pick 1 of 17 Wizard Spells and here I recommend either Expeditious Retreat or Feather Fall. Expeditious Retreat will allow you to make Dash a Bonus Action, doubling your Movement range, and still allowing you to attack. This can allow you to get to enemies more easily. Feather Fall negates fall damage, so if you jump off a high cliff onto enemies below you will take no damage. Either are good choices.

Once you hit Level 4, which is max level for Early Access, you’ll gain an additional Spell. Here I suggest taking either Thunderwave or Burning Hands (whichever you didn’t take before), or Witch Bolt if you didn’t take it at Level 3. You’ll also gain an extra Spell Slot so you can cast one more spell. 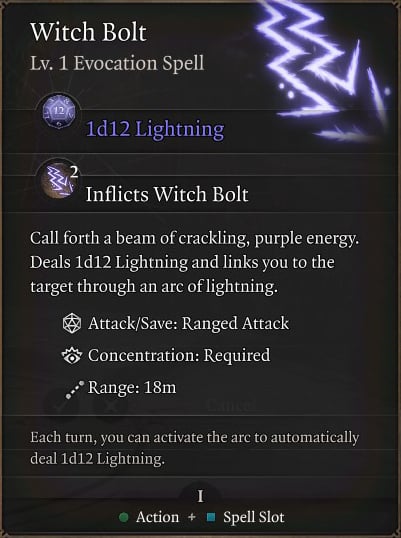 Then you will get to choose your Feat and here you will take Ability Improvement in order to place 1 point into Strength and another into Constitution, bringing these both to 18. This will give you +4 on your Attack and Damage Rolls with melee weapons. Increasing your Constitution Modifier to +4 will bring your total HP up to 44, which is pretty damn good!

As far as equipment is concerned you’ll have to decide what type of Weapons you want to use. You can dual wield, use a two-handed weapon or use a one-handed weapon and a shield if you like. It’s really up to how you want to play, but you should match this to your passive ability selected at Level 2. I personally like to use a Two-Handed Weapon, because there are some fantastic ones in Early Access, but the choice is yours. 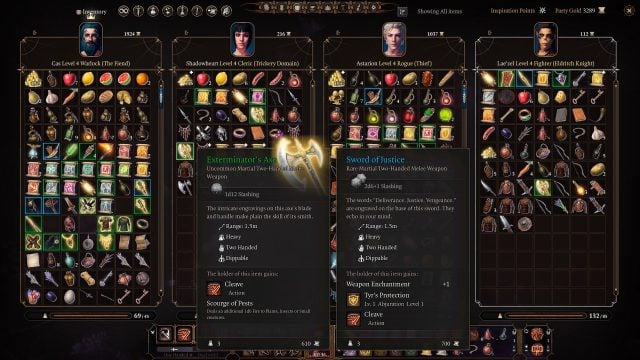 As far as Armor goes, you’ll likely be using Medium Armor most of Early Access since there doesn’t seem to be any good Heavy Armor. However, this works out well because you can use your Dexterity Modifier of +2 completely, giving you at least 16 Armor Class (17 if you use Lae’Zel’s Githyanki Half Plate). You can get up to at least 20 AC with this Half Plate, with the Defense passive at Level 2, and if you use a Shield. 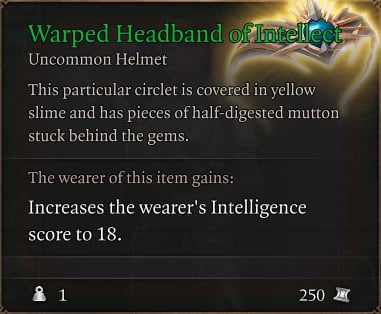 As for Accessories, really the only one you absolutely need is the Warped Headband of Intellect, which I mentioned earlier. This one item makes this Build shine in Early Access, and if it remains in the live release you’ll also want to aim to get this one there as well!

If you’re using a Two-Handed Weapon try to use Cleave first before expending a Spell Slot on an AoE spell. Save your Spells for when you need them most, because they have a lot more versatility. Unique Weapons can have affects on them that will be applied to the Cleave, like Exterminator’s Axe, which is great. 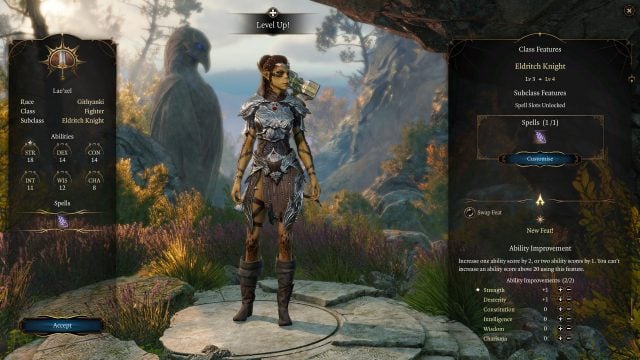 Lae’Zel makes a fantastic candidate for an Eldritch Knight if you have her in your party because she’s a Githyanki and at level 4 you can get her Strength to 18 and Dexterity to 14. The downside is that she’ll have less HP than a player made character, but the difficulty of Early Access at the moment isn’t so bad this should matter too much.

Lastly, use Magic Missile on hard to hit enemies, even if they are point blank. This is especially true of those enemies in dark places, or ones that use Mirror Image. It can help you deal with annoying enemies quickly, so you can get back to pummeling things in melee.