In this Baldur’s Gate 3 Build Guide I’m going to be covering my Warlock Build for Early Access, and showing you what I’ve found to work best. I’ll be doing more Build Guides at the launch of Baldur’s Gate 3, but for now, let’s look at how you can use a Warlock effectively in the first Act of the game.

Warlocks in Baldur’s Gate 3 Early Access are extremely powerful because of their Cantrip Eldritch Blast that does between 1-10 damage every use from 18m away, and Cantrips can be cast every turn without using up Spell Slots. Additionally, they have some very good spells that deal AoE damage, and they can use Misty Step once they reach Level 3. 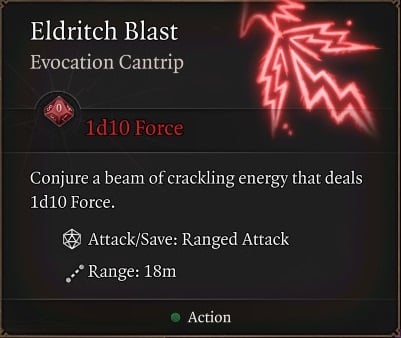 Misty Step allows them to teleport to a location they can see, allowing they to get high up easily where they have Advantage when using Eldritch Blast. Advantage, means they can roll 2 D20s when attacking, and use the higher of the two values for their role. This increases their Hit chance significantly, so they should always look to get up high at the beginning of combat if they can, much like Rangers and Mages try to do in Divinity: Original Sin II.

In this section we’ll take a look at how to setup your Warlock during Character Creation for the best results. You don’t have to follow this to the letter, and it’s likely this will change at full launch of the game. However, this will hold you in good stead during Early Access.

What Background you choose isn’t of serious importance here, so you are free to pick and choose what you like. The only exceptions are that you should not choose any Backgrounds with Intimidation, Persuasion or Deception. This sounds completely counter intuitive because all these things benefit from Charisma, which is the Warlock’s Spell Casting Ability Modifier (the stat that effects its spells’ accuracy and DC). However, you can select Intimidation when you get to the Skills section, and you’ll gain Persuasion and Deception at level 2 by taking the Beguiling Influence passive. This will allow you to gain other Skill Proficiencies from your Background, which you can use for other Skill Checks through out Early Access.

The Races I suggest using when making a Warlock are: Half-Elf, Asmodeus Tiefling, or Drow. Half-Elves and Tieflings will allow you get to 17 Charisma during Character Creation, however you only need to get to 16 for Early Access. This is because you will gain the opportunity only once to gain additional Ability Points (at Level 4) during Early Access, and you don’t get an improvement in Ability Modifier at odd numbers. You’ll be aiming to get to 18 at Level 4, and this will give you +4 to your Eldritch Blast hit rolls, as well improve the difficulty it is to save against your spells. 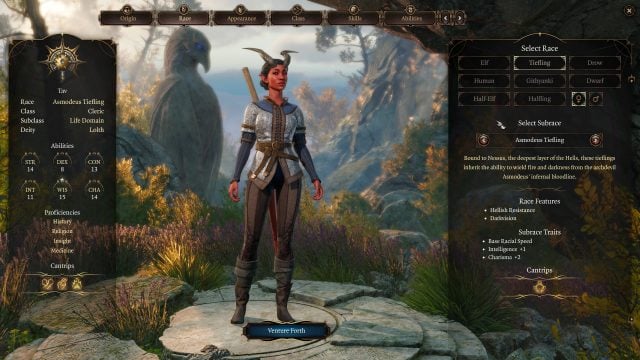 Half-Elf will allow you to get to 17 Charisma, and place 2 other Ability Points, which is great. They also have Darkvision, allowing them to see better in dark places, improving your accuracy in combat and helping you locate things.

Asmodeus Tiefling (besides Darkvision) also has the added benefit of the Thaumaturgy Cantrip, which gives you Advantage on Intimidation checks if you use it before trying to Intimidate people, which is extremely useful. Particularly because you will have a bonus of +5 to these rolls from the very beginning of the game.

Drow will allow you to get to 16 Charisma, and have the added benefit of Superior Dark Vision, allowing them to see twice as far in the Dark as either Half-Elf or Tiefling. This means your accuracy in dark locations will be even better in these places than Half-Elf and Asmodeus Tiefling on average, but the choice is up to you.

Obviously we are choosing Warlock here, but which Subclass is really what we’re deciding, since this must be done during Character Creation for Warlocks. You get to choose from The Fiend and The Great Old One so far in Early Access, and really the choice comes down to whether or not the you want to have Dark One’s Blessing or Tasha’s Hideous Laugher and Dissonant Whispers.

Dark One’s Blessing gives you temporary hit points equal to your Charisma Modifier + your Level when you kill an enemy. While Tasha’s Hideous Laughter and Dissonant Whispers can incapacitate targets, making them forgo their turn, which can be extremely valuable in fights where there are tough enemies. Dissonant Whispers even deals a good chunk of damage as well, it’s really your call here, and you can use whichever you feel is best.

Whatever you do though, make sure you take Eldritch Blast for one of your Cantrips, because as I’ve mentioned it’s going to be your primary attack every round. Another great Cantrip to take alongside it is Friends, as this allows you to gain Advantage on Charisma check rolls against non-hostile targets. Cast it on them before entering dialogue (if you can), and you should be able to get the desired rolls you want more often than not.

Make sure one of your Spells chosen is Hex, because it allows you to increase your damage when using Eldritch Blast against the target and it’s a Bonus Action, meaning you can use it and then use Eldritch Blast in the same round. What’s really great about this Spell is that if the target dies you can cast it again without consuming an additional Spell Slot. This allows you to use it nearly every combat if you play smart. Just remember to use Hex when you are sure you won’t get hit, because it requires Concentration, and you will lose it if you fail a Constitution Save. If you chose The Great Old One, you can take Hex at level 2 and use Tasha’s Hideous Laugher and Dissonant Whispers at Level 1. 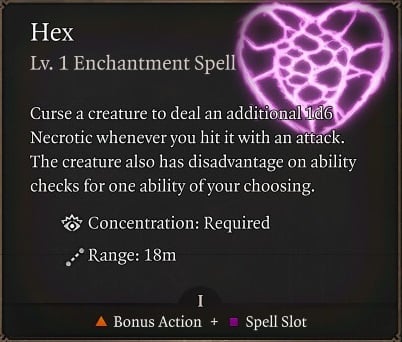 For Skills you want to take Intimidation and any other Skill you wish. It doesn’t matter which you take here, so this one again is completely up to you.

When it comes to Ability Points you want to make sure that you are at least at 16 in Charisma so that you gain a +3 Ability Modifier. Other points should be spread between Constitution, Dexterity, and Intelligence. Intelligence, although not useful in combat, encompasses a large number of Skills. And if Warlock is your player character then it is wise to have a few points here to help with dialogues and interactions. 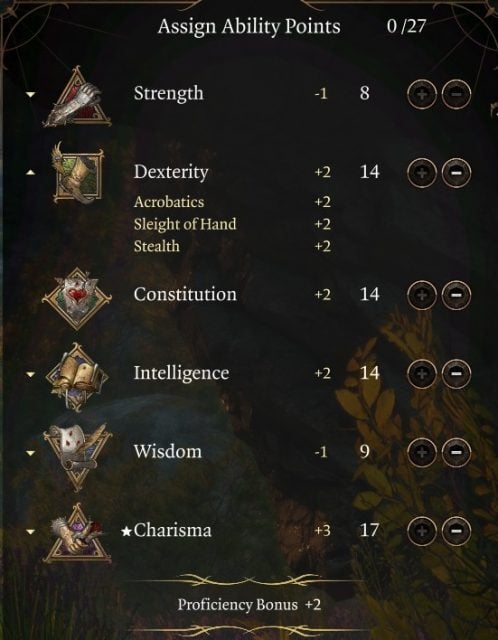 Remember that at level 4 you will gain 2 Ability Points, and these should both go into Charisma if it’s at 16 during Character Creation, so be sure to make Dexterity, Constitution and Intelligence even numbers so that you don’t waste Ability Points. 14 Dex, 14 Con, 14 Int is not a bad spread here. If you take Charisma to 17 then at Level 4 you can bump Charisma just 1 point and place the remaining point into any other Ability.

At Level 2 you’ll gain access to some Eldritch Invocations that will allow you to further customize your character. Of these the most important one to take is Agonizing Blast, which adds your Charisma Modifier to the damage of your Eldritch Blast Cantrip. This will be +3 damage until level 4, at which point it will become +4 when you increase Charisma to 18.

The other Eldritch Invocation we’ll take is Devil’s Sight, which allows you to see in Darkness, preventing Disadvantage on all your attacks in dark places. This is huge because you will fight in Darkness fairly often, and you don’t want to miss your attacks!

If you haven’t taken Hex yet, be sure to do so here, otherwise any other Spell will do if you already have it. Read their descriptions and see what they do. I tend to avoid defensive spells, and focus on offensive ones that AoE.

At Warlock Level 3 in Early Access you gain Pact of the Chain, which allows you to summon a Familiar to assist you in combat. So make sure you start casting this out of combat so it can help you defeat enemies when fighting. Additionally, you’ll gain access to some Level 2 spells, and you can pick 1 to use. I personally like Misty Step (as I mentioned before), but you can take whatever you wish here. Hold Person is a great way to remove an enemy from a fight, and Invisibility can be used in a number of creative ways in or out of combat. 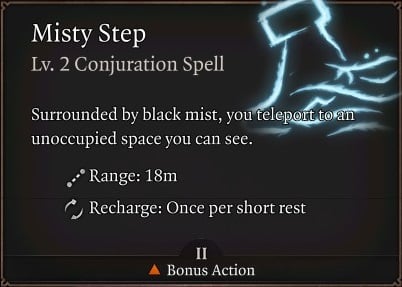 You’ll get to take another spell here as well, so if you didn’t take Misty Step at Level 3, take it now. Or choose from one of the others I suggested, or whichever one you think fits best to you.

As far as Equipment goes for this Warlock Build you don’t need to worry about Weapons at all, since you’ll be casting spells 95% of the time. Weapons are only used when you are in melee range and you can’t move away without taking damage. If you do, however, need to use a Weapon make sure it’s one you are Proficient with.

You’ll be using Light Armor so you want to look out for Leather Armor +1 or Studded Leather Armor if you can. This will ensure that you have at least 14 AC, which is not terrible at all. You can use any Accessories you find, but I have not found any yet that would improve upon this Build much yet. 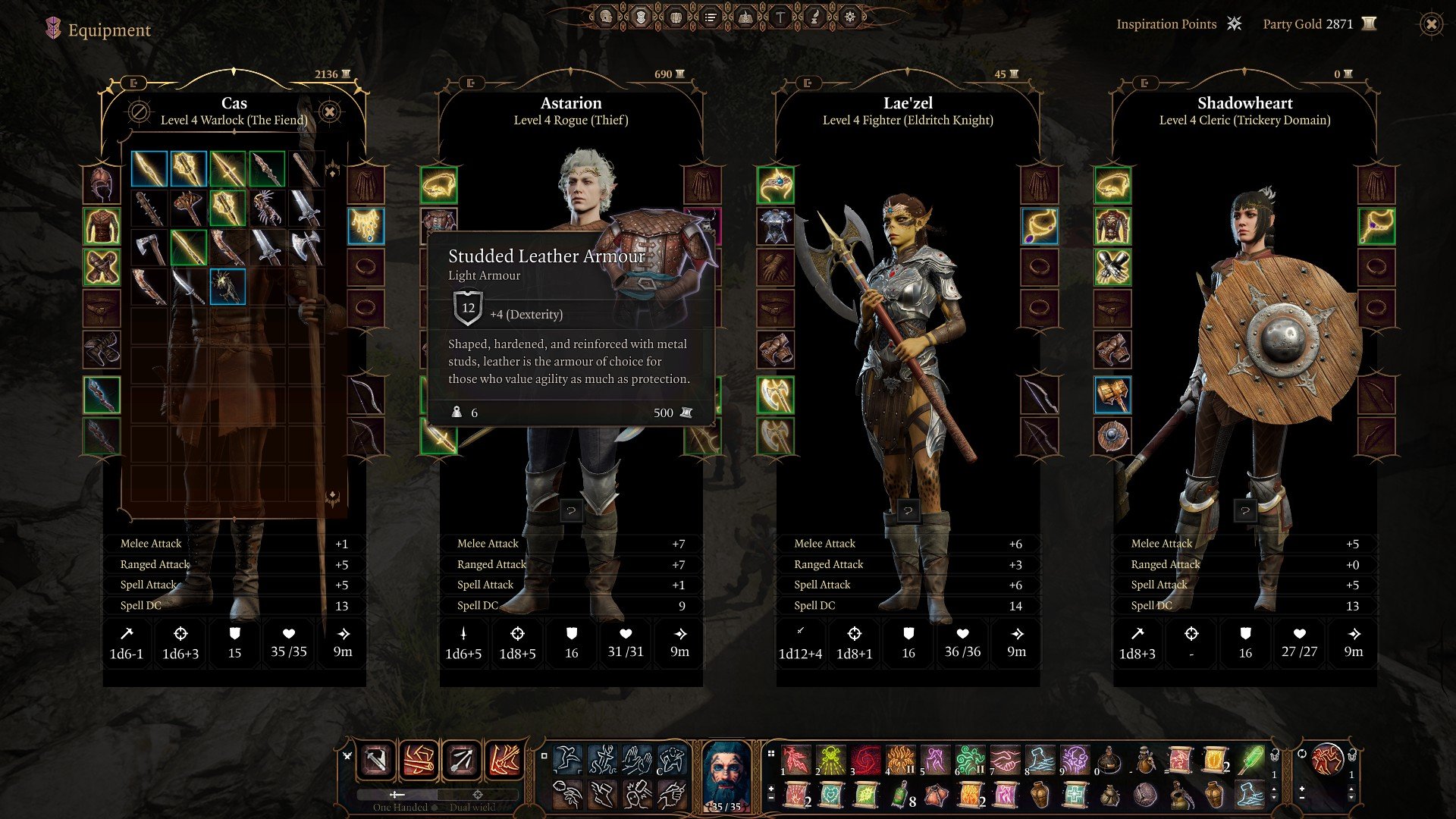 Always aim to get up high during combat on the first turn if you can in order to gain Advantage on your Eldritch Blast Cantrip. This will increase your Hit chance, and is vital to success in many of the more challenging fights. Use Misty Step once you have it if you need to, and don’t be afraid to jump if you don’t have it yet.

Warlocks have the disadvantage that they will max out at 2 spell casts before they need to rest in Early Access, which is not as much as other spells casters. However, they do recover all uses on a Short Rest. Take advantage of this, and remember to use your Short Rest when you don’t need to go to Camp. Additionally, keep in mind that Hex can be used over and over again as long as you don’t lose Concentration on it.

Lastly, if you are using Wyll for your Warlock then you you’ll want to make sure you put both Ability Points into Charisma at level 4, in order to reach that +4 Modifier. Also, it’s a great idea to have him initiate dialogues when possible, because he will gain all the benefits that you would if you were a Warlock.

Stay tuned for more Baldur’s Gate 3 content on this channel, including Build Guides, with Eldritch Knight coming up next. Be sure to drop by our Twitch Channel if you have questions about the game, and check out the BG3 Wiki if you’re looking for something specific.