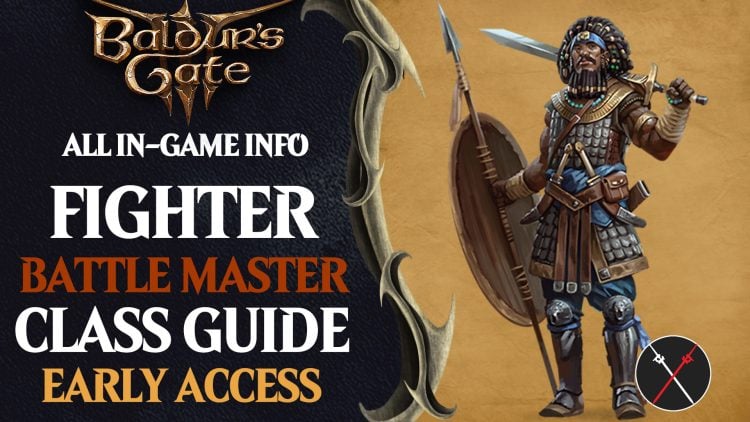 The Battle Master Fighter is a reputable Subclass if you want to concentrate on dealing the most damage in the melee range. Unlike the Eldritch Knight, however, they won’t be able to cast Spells but due to the Manoeuvres they gain at Level 3 and their Extra Attack at Level 5, they’re difficult to go up against. If you just want to put down multiple enemies efficiently at close range, then this Subclass is for you. 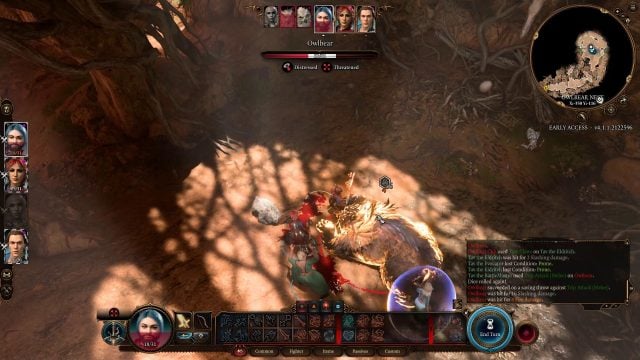 Additionally, the Battle Master Fighter is very resilient, more so than the Barbarians since they’re proficient in wielding Shields and Heavy Armor, making it challenging to hit them. They even have increased Constitution so their HP is just as high.

In this section, we’ll take a look at how to set up your Fighter during Character Creation for the best results. You don’t have to follow this to the letter, and this will likely change at the full launch of the game. However, this will hold you in good stead during Early Access.

For Background, choose one that provides you with Athletics as the only Strength Skill alongside the Skills of other Abilities you’ll be investing in. For instance, you can go for Charisma if you don’t have allies who specialize in this. Charisma has Intimidation, Persuasion, Deception, and Performance. Some Background examples are Entertainer, Guild Artisan, and Criminal.

The first Race that works well for this Build is the Shield Dwarf. Shield Dwarves will let you reach 17 Strength and 17 Constitution, which means that when you hit Level 4, you can have 18 in both of these primary Abilities. They also have Darkvision, allowing them to perform better in dark places. 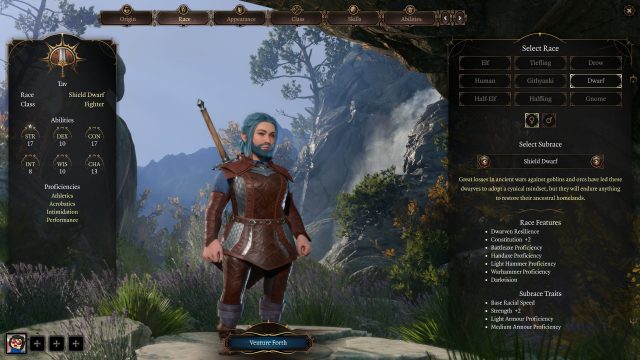 Next is the Wood Half-Elf where you’ll be allocating 1 point each to Strength and Constitution. Although they’ll only reach 16 each, you gain additional perks including Darkvision and Fleet of Foot, which will have you cover longer distances. Finally, there’s the Human who will grant a more balanced Ability spread but you don’t gain the added benefits that you do from the two previous Races.

When it comes to the Fighting Style, I highly recommend getting Duelling or Great Weapon Fighting depending on the type of Weapon you intend to wield in the long run. Duelling is great if you’ll be going for a One-Handed Weapon and Shield setup since you gain a +2 Damage bonus on Weapon Attacks. Comparatively, Great Weapon Fighting is a good choice for Two-Handed Melee Weapon users, allowing you to perform another Damage Roll if you happen to initially roll a 1 or 2, thereby amplifying the carnage you deal. But no matter what, you shouldn’t pick Archery since you won’t be making use of your Ranged Weapons that much. 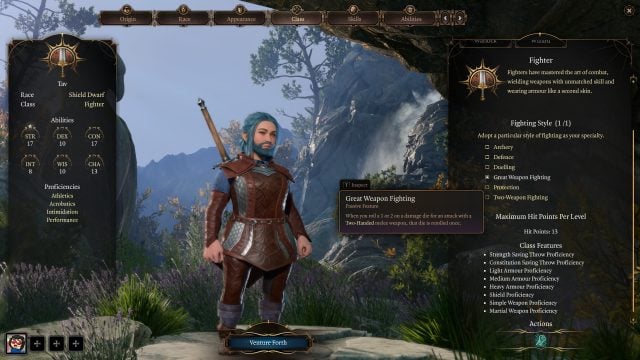 Together with the Fighting Style, you instantly gain access to Second Wind, which lets you heal yourself as a Bonus Action.

For Skills, you can go for Charisma or Wisdom, or the ones that you invest Ability points into. Wisdom has Animal Handling, Insight, Medicine, Perception, and Survival, and I’ve already listed what Charisma Skills there are.

The primary Abilities that are needed for this Build are Strength and Constitution with the former increasing your chances of successfully attacking and dealing massive damage using Melee Weapons. Meanwhile, Constitution should boost your max HP. Similar to the Paladin, you’ll ideally keep Dexterity at 10 since you’ll be wearing Heavy Armor, which doesn’t account for the Dexterity Modifier bonuses but your AC will continue to be high. In the meantime, you can don Medium Armor such as Lae’zel’s Githyanki Half Plate or Scale Mail Armor +1 to boost your AC to 15. In conclusion, your Ability spread should look something like this: 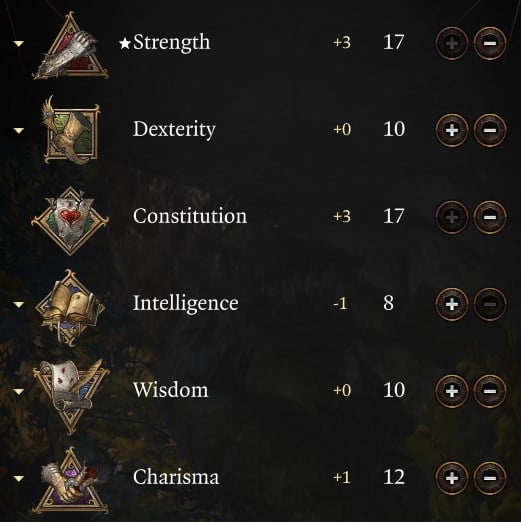 As early as Level 2, the Fighter gains an extra Action in the form of Action Surge. This is a powerful Class Feature because it lets you finish off a target by hitting them once again in the same turn. What’s more, is that you’ll only need to perform a Short Rest to replenish it. 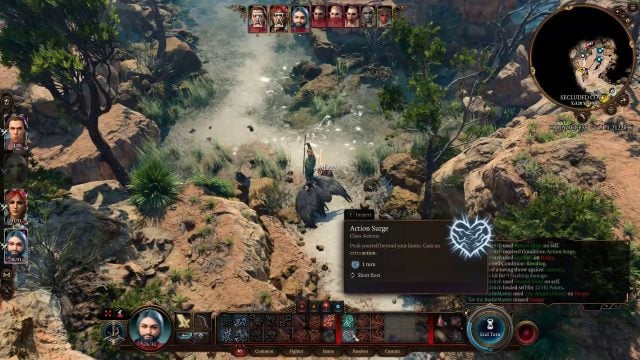 At Level 3, you’ll get to choose your Fighter’s Subclass and for this Build, you’re going to select the Battle Master. Alongside this, you gain access to 4 Superiority Dice, which is a resource used for activating specific Manoeuvres. This can be fully replenished by taking a Short or Long Rest. Given the 6 choices, you’ll want to pick the following:

Pushing Attack – Given how a lot of the fighting in Early Access occurs on cliffs or highly elevated areas, you should definitely go for Pushing Attack. As the name implies, you’ll be able to push off targets from the edge, often killing them as a result. You just can’t retrieve their items but it’s going to be worth it to eliminate them faster.

Riposte – This is a Reaction that lets you fight back every time the enemy misses their melee attack against you.

Trip Attack – This is another useful Manoeuvre that lets you knock the enemy Prone, making them vulnerable in combat. Trip Attack is especially useful to the Battle Master since it replaces the Charge Action.

For Pushing and Trip Attack, remember that these respective movesets allow you to deal extra d8 damage on top of the Action you’re already executing. Additionally, they also come in the form of Melee or Ranged Attacks so if you’re too far away from the middle of combat, you can take a gamble and use your Bow to perform these Manoeuvres. 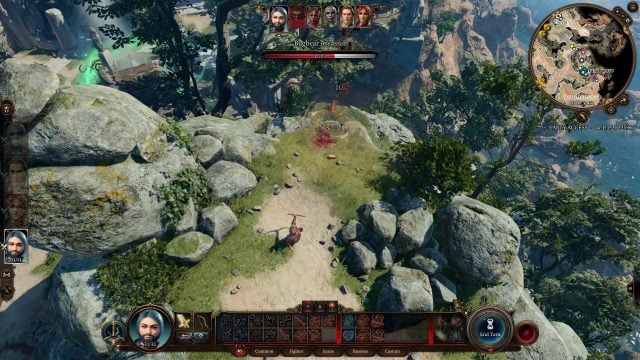 At Level 4, you can choose a Feat, and here you’ll be taking Ability Improvement to place 1 point into Strength and Constitution, amounting to 18 each if you’ve chosen the Shield Dwarf Race. Doing so will not only boost your Attack and Damage Rolls due to the +4 Strength Modifier but also bring your max HP by up to 44, which is huge!

At Level 5, you gain the much-anticipated Extra Attack, which lets you make another attack using your Melee Weapon, allowing you to obliterate powerful enemies. With Action Surge, you’ll be able to execute at most 3 attacks in a single turn! 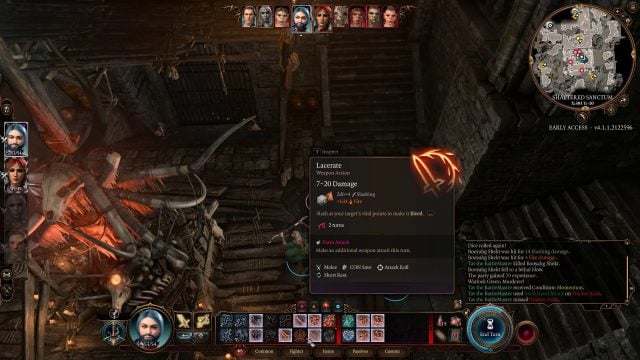 When it comes to the Battle Master Fighter’s Equipment, I prefer wielding Two-Handed Weapons because of the damage potential, which is significantly higher than One-Handed Weapons. Specifically, a great Weapon to use is the Everburn Blade, which you get by killing Commander Zhalk of the Nautiloid. In addition to the Slashing Damage, the blade inflicts Fire Damage and can set the area on fire when combined with barrels of oil or Grease. It even has Weapon Actions including Lacerate and Cleave to inflict Bleeding and to hit adjacent enemies in one swing, respectively. 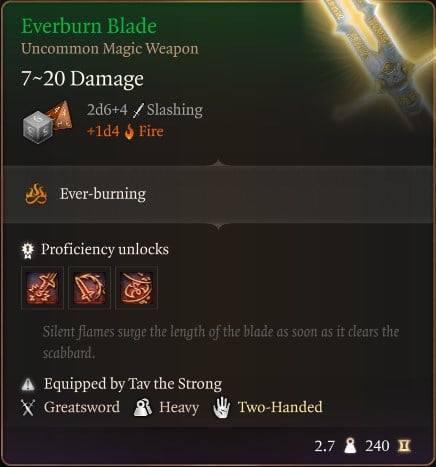 In terms of Heavy Armor, your choices in Early Access are limited. However, wearing one becomes advantageous since this lets you allocate points to other Abilities that are not Dexterity. You can get your hands on the Chain Mail Armor by defeating Lurgan in the Underdark. Should you wear the Adamantine Splint Armor from Grymforge, your AC will increase to 17.

For Accessories, you’ll want to take Absolute’s Talisman and Haste Helm. Absolute’s Talisman is a fail-safe should your HP go as low as 25% where you’ll automatically regain 1-8 HP the moment you deal damage. Meanwhile, Haste Helm is very useful for the Shield Dwarf given that their Movement Speed is relatively lower compared to the Wood Half-Elf and Human. This item will increase your coverage by 3m at the start of every encounter so it’ll be easier to reach your targets. 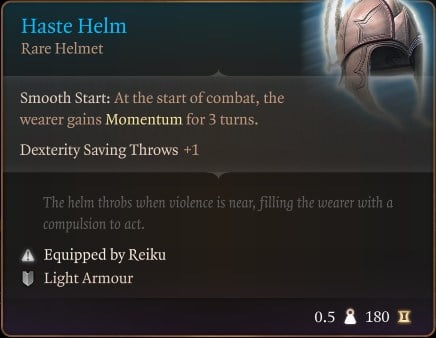 The Battle Master Fighter is melee-focused compared to the Eldritch Knight but they’re just as strong due to the Manoeuvres they perform. The moment you gain Riposte, be sure to select its icon by your character’s UI and tick “Ask”. Doing so will let you gain control over this move so that it won’t instantly be executed when you don’t want it to. Every time there’s a chance to execute Riposte, a message box will appear on the screen, prompting you to use it then and there or to skip it entirely in the meantime. 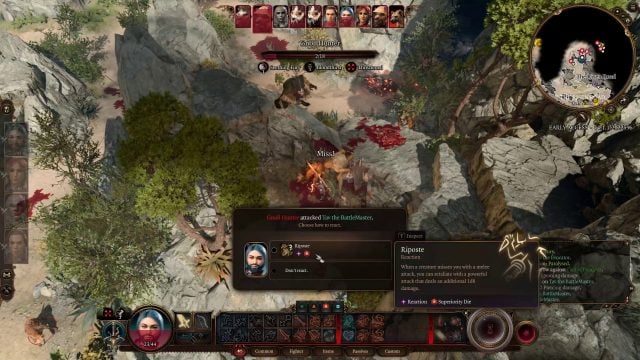 For Manoeuvre alternatives, you might also want to consider Disarming Attack and Rally based on certain use cases. Disarming Attack forces the enemy to drop their Weapon similar to the Heat Metal Spell but it’s not going to be limited to Metal Weapons only. Rally will let you heal an ally, and is useful in cases when they’re too squishy such as having 2 Wizards in the party.

Remember that at Level 4, you can select the Great Weapon Master Feat but I would recommend this only if you have a Spellcaster who can cast Bless or you wear The Whispering Promise Ring and then get healed. Either option will grant you at least a 1-4 Attack Roll bonus, which you’ll need to compensate for the Feat’s -5 Attack Roll penalty. If you’re set on getting this, be sure to allocate 16 points each into Strength and Constitution during Character Creation so you can use the remaining points for other Abilities. 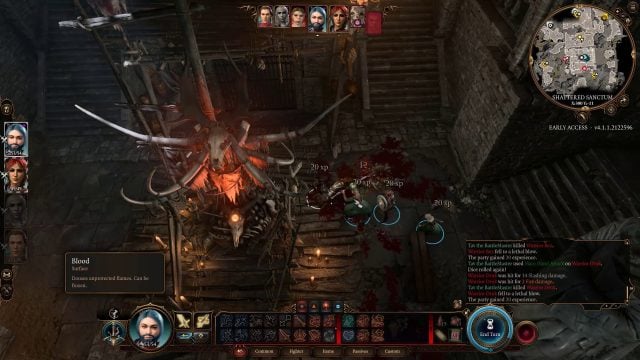 Another good choice for your Two-Handed Weapon is the Sword of Justice from Anders if you’re not able to acquire the Everburn Blade. Aside from the decent damage and the same Weapon Actions, you also gain Tyr’s Protection. This is a Bonus Action that you can use to increase your AC by 2. With the Chain Mail Armor, your total AC becomes 18!

Lastly, you can choose to make Lae’zel a Battle Master Fighter because she has the right Ability spread for it. At Level 4, just be sure to invest 1 point each into Strength and Dexterity since she’s also wearing Medium Armor. This accounts for at most +2 Dexterity Modifier. The only downside is she’ll have less HP than a player character but it shouldn’t be an issue since the creatures in Early Access aren’t that difficult to deal with.

Stay tuned for more Baldur’s Gate 3 content as we update the other Builds, and be sure to drop by our Twitch Channel if you have questions about the game. If you need something specific, check out our Baldur’s Gate 3 Wiki which is being worked on night and day!