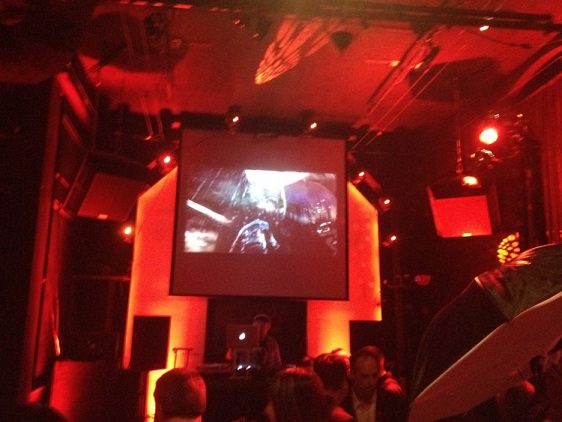 Last week the Dark Souls community was invited to go celebrate the launch of Dark Souls II, with From and Namco, in San Fransisco.  I was the lucky son of a bitch who got to go represent us all.  I got to meet up with J. Kartje, the Community Manager for Namco and have lunch with him at In & Out Burger (it was just as good as I remember).  We talked about Dark Souls II and BSed for a bit before he had to go (as you can imagine it was a rather busy day for him).  Then I was left to my own devices for a couple of hours before the event (I may have hung out with Vaatividya during this time, but that’s neither here nor there).

While hanging out at the party I got to talk with some of the QA testers and ask them some questions about the game.  The following are things I learned and verified it would be ok to share: Click below if you want to see them! 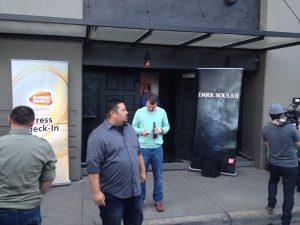 Entrance to the party

The Launch Party started at 6pm but I was asked to show up a bit early, so I arrived around 5pm.  There was already a line of about 50 people and many of them had been there several hours. 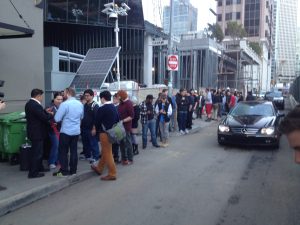 The Line at 5pm

I spoke with several members of the community that could make it out, while they were setting up inside, and many of them knew of the wiki and forums and were happy of their existence.  One member even told me it was the reason his friend started playing Dark Souls.  Was awesome to hear that! 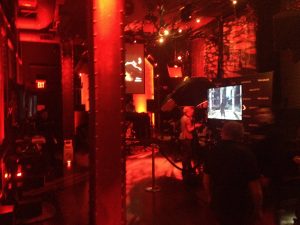 The inside of the event before everyone arrived 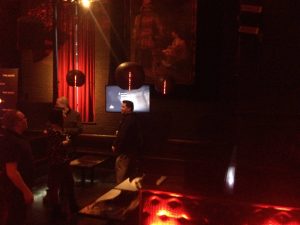 Another pic of inside 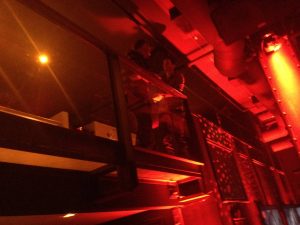 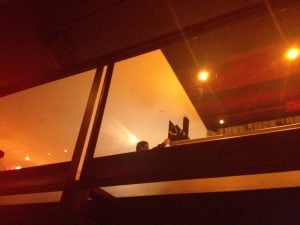 The event started shortly thereafter, and we got to play the game and the place was packed!

During the event I got to interview Takeshi Miyazoe, the producer of Dark Souls II.  He was, by the way, the friendliest most approachable person I met at the party.  He actually stayed a couple rooms down from me at the hotel.  These are some of the questions I asked him:

Did you get everything into the game that you felt that you wanted to get into it? (asked by Devokai)

” I think so. When I speak with the developers and directors, the main concepts that we wanted in Dark Souls II have been met. You know, in the early stages there was a lot of things that we talked about that would be really cool and really new and stuff, but I think in the end our concept of a high sense of achievement, the loose connection for a unique online system, all that has been really well put together. Hopefully next week when the game comes out the experience will be a very full one.”

Are you aware of the community perceives you to be as the only game developer to listens to what the community actually wants? (Asked by Anubis)


“(Laughs) Great. As game developers, we try not to be influenced too much by the fan feedback. It’s not that we incorporate everything that everybody says. I think FromSoftware really sticks to their philosophy and really strives to create the game that they want to create. But fan feedback is always great. It’s good to understand how the fans understand and experience the game. It’s always great feedback to incorporate into the ideas.”

What was the hardest thing to develop in this game?

“Well, the most challenging was probably really determining what to maintain from Dark Souls I and what change for a new experience. You know technically, the technology that we used to develop a new engine, better graphics, all that stuff, was challenging but was more from a game design, game development perspective. We didn’t want to upset the fans by changing the game too much. We wanted to maintain what Dark Souls really should feel like and we also needed to give a new experience and I think that was the biggest challenge. I think we were able to provide justice and an immersive experience”

Will there be future patches after release for balancing issues and updates? (asked by DarkSeven)

“No, I don’t think so. In Dark Souls II we spent a lot of time… We tried to develop without considering patches.”  (Cas note: I learned from QA Tester that the game will instead be “calibrated” server-side.)

If you could say one thing to the Dark Souls Community, what would it be?

“Well you know, in Dark Souls II we wanted to generate a new Dark Souls experience, new innovations, more immersive world for players to sink deep down into. All of that while having a great time facing the difficulties and challenges and hopefully they can really take part in the world of Dark Souls and enjoy it, enjoy dying, and are repeatedly challenged until the end of the game.”

Well there you have it.  I had a lot of fun and it was great seeing all the members of the community out enjoying the game (and open bar).  I hope I got you guys some information you wanted and hope that I represented us all well.  I’m proud of the community here and am very excited for Dark Souls II!!