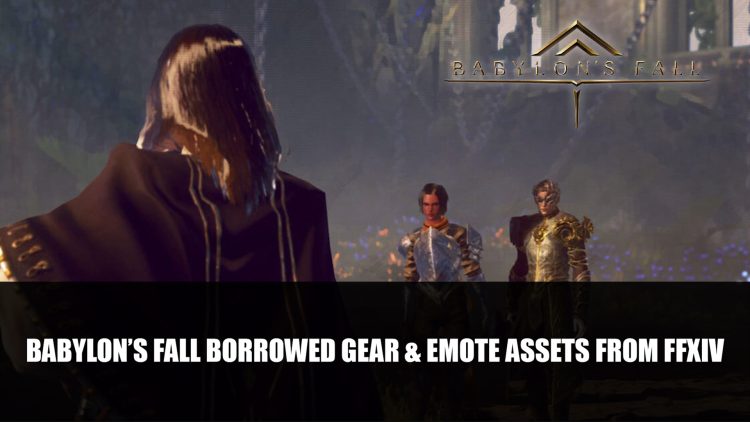 Platium Games has confirmed using “borrowed” assets for gear and emotes in Babylon’s Fall from the MMORPG Final Fantasy XIV.

If you’ve seen Babylon’s Fall footage or played recently in the closed network test, you may have seen something a little odd or rather familiar with some of the gear and emotes used in-game. If you’ve been wondering why they may look a little similar to those found in Final Fantasy XIV that’s because they are from FFXIV. PlatinumGames has explained that the assets in Phase 3 of the Closed Beta Test are actually “borrowed” from the MMORPG.

Babylon’s Fall’s producer Yosuke Saito explained in a post on the official community website for Babylon’s Fall, Hanging Garden that in a meeting with FFXIV producer & director Naoki Yoshida actually offered up the assets to be used in Babylon’s Fall. The reason for this is that it was to help implement “a much wider variety of gear and emotes in the game” than they had originally set out to do. Saito explains that most “in-game” gear is unique to Babylon’s Fall and that the borrowed assets were used in the intro and mid-level range of the game.

This statement was backed up by Yoshida himself on the community board where he shared that he was actually “kind of jealous” that his fellow developer was making a “hardcore action-based hack-and-slash game” but also realised that “Preparing all of the gear variations needed for the gameplay is going to be really difficult.” This made him want to help out and offer up the assets to be used in Babylon’s Fall. He also reiterates his full support for the game, adding:

I myself am a huge fan of online games, a gamer, and a developer. That’s why I couldn’t be happier if Babylon’s Fall succeeds and reinvigorates Japanese online games while boosting the number of players in the genre.

The implementation of the assets are being “supervised by the FFXIV team” to make sure they “fit into the world”.

It’s quite interesting to hear that the teamwork has actually crossed departments of projects, and only shows that each team seems to have their back when supporting different games.

For a rundown of recent RPG news find it here in Top RPG News Of The Week: November 28th (Scalebound, Dark Souls, Elder Scrolls 6 And More!).