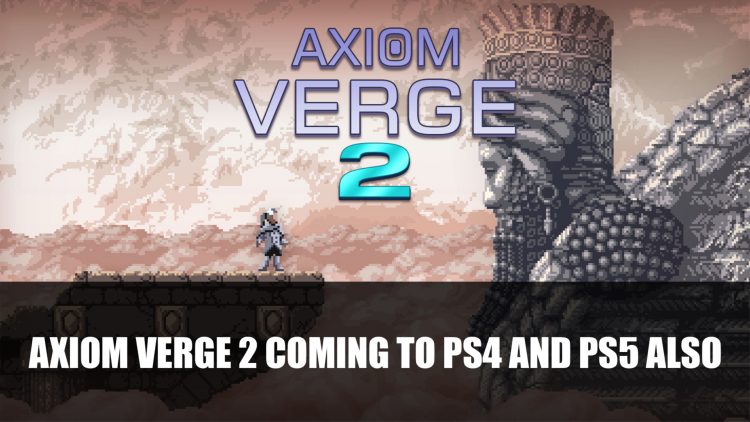 Axiom Verge 2 the sequel to the acclaimed metroidvania game has been announced to be coming to new platforms. New platforms have been added to the launch list including Playstation 5 and Playstation 4.

Axiom Verge 2 Announced To Be Coming to PS5 & PS4

The sequel to the highly acclaimed metroidvania action adventure title, Axiom Verge 2 has been announced to be coming to PS4 and PS5, adding to  already announced Switch and PC. The title will be bringing new characters, new abilities, new enemies, and a new world. As it is a brand new game, you can play it before or after Axiom Verge according to the developer.

In a post on the Playstation Blog the developer revealed that the story of Trace, Elsenova, and Athetos from the first game is actually part of a much larger universe, a sidestory. Axiom Verge 2 will instead follow Indra, a mysterious billionaire/tech genius who ends up on an alternate version of Earth. If you were wondering if this is it for series, the developer teases that while Axiom Verge 2 is connected to the first game, you won’t see the relation until Axiom Verge 3.

Official key features can be found below:

If you want to know why Axiom Verge made our  Top 10 Metroidvanias To Play In 2021? Watch/read about our list here, which includes Death’s Gambit, Bloodstained Ritual of the Night and more!

Currently there is no release date, but according to the developer Top Happ, he hopes to release the PS5 version along with the PS4, but it may take more time as he wants to take full advantage of the in-game hints system.

Axiom Verge 2 will be releasing on Switch, PC (via the Epic Games Store), as well as newly announced for Playstation 4 and Playstation 5.