Anime review for Attack on Titan – a project based on the Kodansha-published manga by Hajime Isayama and first published on September 9, 2009. Let me just start by saying this the first Anime I’ve really watched from the start (I’ve seen a few episodes of random Anime here and there, but often didn’t know what the fuck was going on as it was like season 3).  I’ve never been a fan of Anime, it just never appealed to me.  But all of that changed with Attack on Titan, and below is why!

Since this is an ongoing story, I’ll try to avoid spoilers as much as possible, but some basic setting for those considering: Attack on Titan is about humanity’s fight against Titans. These large humanoid creatures vary in size, but are extremely large, unintelligent and devour humans with no apparent motivation.

Incapable of defeating or reasoning with the humanoid monsters, humanity has built 50m high walls to protect itself.  Within the walls, a cult of worship towards the protective barriers develop, as 100 years of peace go by and allow the sorrows of the past to be forgotten.  That peace, however, won’t last, as Titans have finally broken through and bring doom to humanity with them.

From the very beginning of the first episode the writer does an amazing job of painting a very bleak and desperate situation for humanity.  If you are looking for a feel good Anime, this surely isn’t the one for you. However, if you can handle the gore and despair, you will also find humor, inspiration, and a very real sense of what it means to be human.

Through the painful fight for survival against all odds, the audience is invited to understand the motivations of the characters, their defeats painful and their triumps – however bleak – empowering. Necessity is the mother of invention, and Attack of Titan’s cast needs are dire indeed. 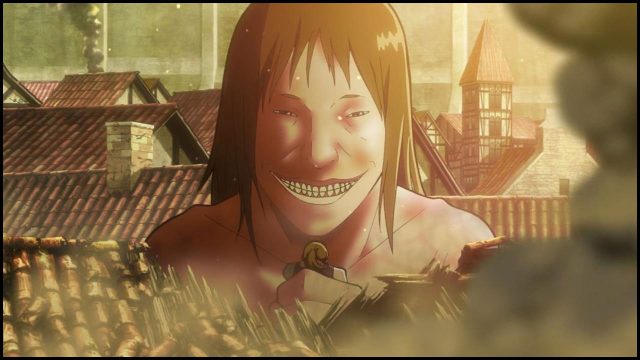 Titan smiles as they devour humans, increasing the creep factor by 100

Attack on Titan follows three friends that dream of one day living outside the walls and seeing the rest of the world.  Being very young when the Titans attack, they can’t do anything to stop the invasion and learn the pain of powerlessness. The writer focuses on each one of them, how they handle their grief and anger and how they each have their own strengths and weaknesses.  The characters frustrate you and surprise you, and because of this you find yourself constantly wondering what they will do next.

Within the first few episodes, many secondary characters are introduced in detail, with the quirks of anime such as specific and seemingly random characteristics. Because of this, those new to anime may find them strange at first, but I advise you give into the experience and enjoy the little nods when they happen, as they bring some comic relief to an otherwise hopeless situation.

As the story progressed, I was shocked to find I had missed subtle clues that provided significant changes in perspective. This makes a re-watch a must-do once you catch up!

Although there is lots of combat and action (lots of scenes of humans fighting the Titans) the part the really pulled me in was the mystery.  The writers allude to the fact that there may be more going on with the Titans than you know.  As the story unfolds you gradually learn more and more about why humanity is in the situation they are in and what caused it.  With each episode you get a little closer to finding out what is really going on and you can’t wait for the next to find out more.  You can watch 3 or 4 episodes in a row without realizing it easily. 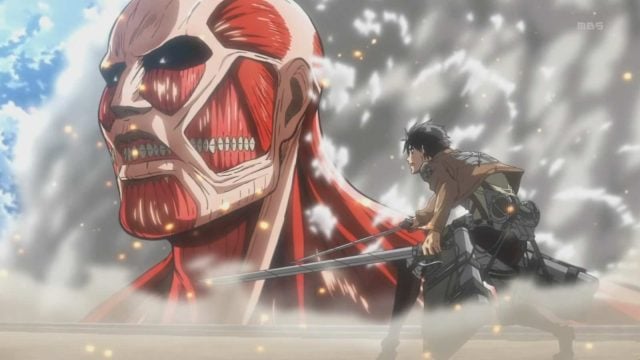 The studios in charge of animating this manga have done an outstanding job, realizing the versatility of the combat gears and terrifying prospect of death-by-Titan. Limited to a few weekly episodes per season, it is clear there were few budget constraints as both animation and voiceover cast are at the very best of the industry. The music is fantastic!  I absolutely love the theme song and have found myself simply searching YouTube just to listen to it.  It really adds to the dramatic feel of the show.

Check out our Anime Reviews section for more gamer reviews on anime you know and love!

9.8
Summary: Attack on Titan is an action packed Anime with drama, humor, mystery that really makes you feel the plight of humanity and want to fight for its survival. Whether you're an anime fan or not, I highly recommend watching it. You won't be disappointed!
Story & Setting (10)
Pacing (9.5)
Visual & Audio (10)
Originality & Predictability (9.8)