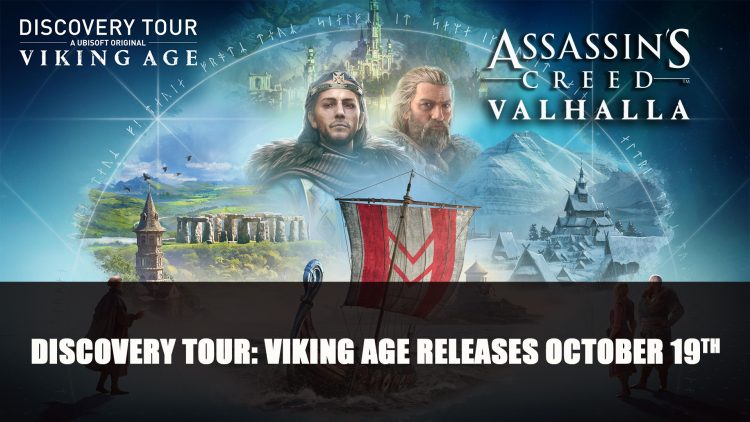 The Discovery Tour: Viking Age will be releasing next month for Assassin’s Creed Valhalla and will arrive as part a free expansion.

You will be able to dive into the Assassin’s Creed Valhalla discovery tour next month featuring the Viking Age. The free expansion will release for the game on October 19th.

It will also be available as standalone on PC for $19.99 on the same day, and then for PS4, PS5, Xbox One, Xbox Series X|S and Stadia in early 2022. Previous discovery tours have included Ancient Egypt-set Origins and the Ancient Greece-set Odyssey.

In case you missed it previously, the Discovery Tour typically allows players to explore the game’s world without the onslaught of enemies. You can take part in interactive tours or examine historical objects and locations to learn about their real-world origins. Viking Age will be more narrative-led according to Ubisoft, and will let you “step into the shoes of Viking and Anglo-Saxon characters from the time while living out their stories and adventures”. Meaning you can concentrate on the more historical side of the Viking era.

Here’s a first-look at the experience that Discovery Tour: Viking Age has to offer.

Starting October 19th, explore the life of ninth-century Norway and England like never before. 🔎

After all, immersion such as this is rivaled only by the Animus itself. pic.twitter.com/4bMGJBxFuM

Previously Ubisoft released update 1.3.1 which came with new river raids, skills plus Aesir difficulty. They also released a preview of the roadmap of content including further game updates and the now announced Discovery Tour: Viking Age.

For more news find it here in Asterigos An Action RPG Announced For PS5, PS4 And PC and Scarlet Nexus Update 1.03 Plus Trailer.