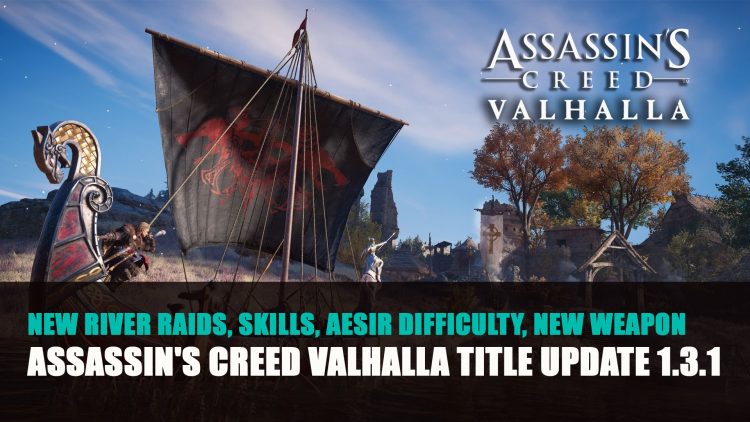 Title Update 1.3.1 drops today for Assassin’s Creed Valhalla adding further challenge with Aesir new difficulty mode. The update which is between 25-35 GB depending on your platform also adds new river raids with five weapons that can be pillaged from the new locations plus a new one-handed sword. Locations the Erriff and Berbha rivers in Ireland, and the Rhine rivers adds three waterways to River Raids mode.

The Aesir difficulty option challenges players with reduced healing, +200% more damage inflicted on a player, and the window for successfully parrying an attack has been reduced by 38%. Also the amount of healing Eivor can receive will be based on the player’s selected difficulty settings and ranges from 100% health restored in Easy all the way up to 60% on Very Hard and Nightmare mode.

New Skills will be available for Eivor and some new tattoos to adorn. New Abilities can be found in River Raids monasteries Spinning Harpoon, Percussion Arrow and Precision Axe Throw.

Previously Ubisoft teased further content coming to Assassin’s Creed Valhalla later this year with a new roadmap. This includes a Discover Tour mode allowing players to explore the medieval countryside at their leisure without the fear of being attacked.

You can check out the full patch notes below:

Check out below for the most notable Title Update 1.3.1 changes. The Siege of Paris – Expansion 2

Wrath of the Druids – Expansion 1