Valhalla is set, for the most part, in 9th century Britain. A period of time where England did not yet exist, and there were several ruling kings of the island, that was under constant threat from Viking invasions via Denmark and Norway. 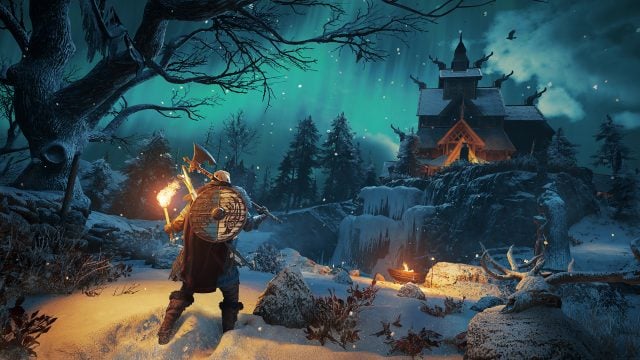 You play as a Viking, Eivor, who follows his brother across the ocean to seek glory and wealth in this new land. The isle is dotted with broken castles left over from centuries of warring rulers, Roman ruins from their occupation some 500 years earlier, and of course monasteries symbolizing the rise of Christianity.

And while it’s not quite as impressive historically as Egypt or Greece, Ubisoft has done an outstanding job here of making Britain seem fantastical in nature. You still get that “tomb raider” feeling as you explore the crypts beneath a church, in search of valuable treasure or Abilities, and it really enhanced my experience with the game.

The story is quite compelling, and the characters themselves are intriguing (and likely familiar to some), as much of the game plays out like your watching an episode of Vikings. I often found myself just doing the main quest line, losing track of the time, and then realizing I hadn’t done any other exploration elements for hours. While the story in Odyssey was good, I never truly felt this way about it, so this is definitely an improvement.

The gameplay of Valhalla can be separated into two parts: Exploration and Combat & Customization so let’s cover that first before we dive in and see how things shake out with the combat, and how you can customize Eivor. 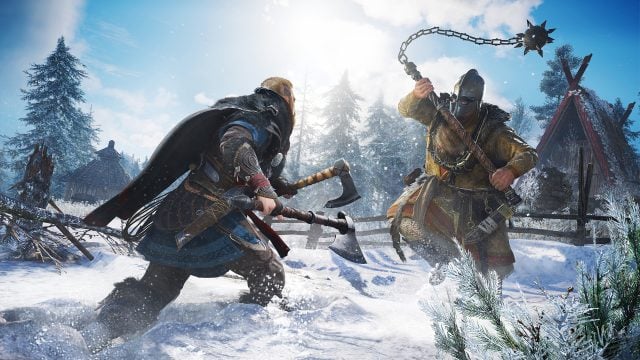 The Exploration of Valhalla will be familiar to anyone who has played either Origins or Odyssey, as much of the formula remains the same. Go to some marker on the map, explore the area there, and seek out and find valuable treasure or do some sort of side “activity”. There are also syncronization points, just like before, that reveal areas of the map and that can be fast traveled to. 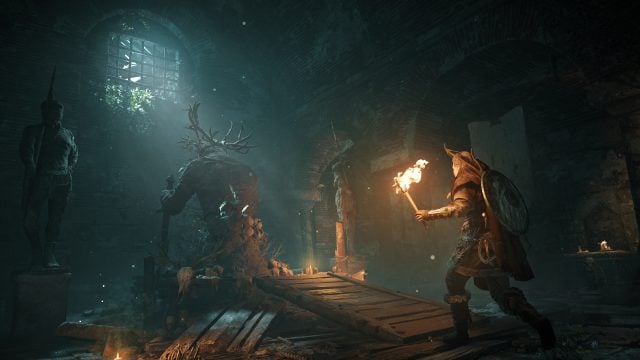 Traversing the landscape can be done via mount or via boat, and you can set both of them to follow the road or coast and take you to your marker. The developers also included a “Cinematic Mode” that pans the camera for a better autoride experience.

Overall, I found the map to be fun to explore and discover, as the vistas are excellent, and the unexpected locations to discover and visit enticing.

What is different in terms of exploration is that you will now have a Settlement with a variety of different services, like a Blacksmith or Trading Post, that grows as you progress the game and construct more buildings. You won’t get access to services in other places, so you must build up your settlement rather than go check what mount is available at what merchant. Players will need to gain both Supplies and Raw Materials in order to create these buildings, and that is done through Raiding.

Raiding is a new activity that allows players to pillage and loot nearby monasteries with their fellow Vikings. When triggering a Raid, your Vikings will join you in combat and help you to defeat the forces in the area, which turns things into open warfare very very quickly.

Because Raiding is such an integral part of Valhalla, there is much more of a focus on outright combat than stealth mechanics, as one might expect since Vikings weren’t particularly known for sneaking around. In short, this is the least “Asassiny” game in the franchise, and frankly it’s probably time Ubisoft just drops it from the title all together, and creates a new franchise where they have the freedom to do whatever they please.

The combat of Valhalla is mostly similar to Odyssey, and Origins and if you’ve played these games then you’ll feel at home. There are minor changes with some things, like key bindings etc, but these should be picked up rather quickly. And as I mentioned before, there is a heavier focus on outright combat than there has been in previous titles. 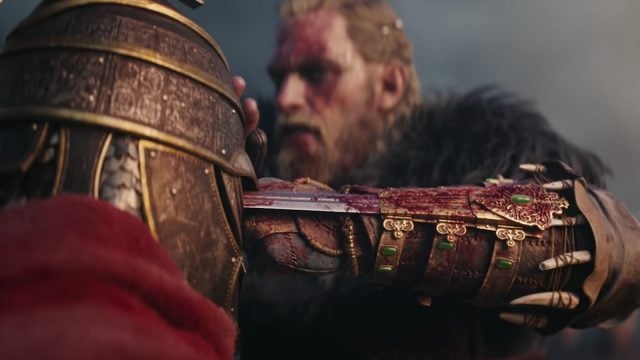 In Odyssey, it always felt like stealth in some form or another was the path with the least resistance. However, when it came to head to head combat, it often seemed like a struggle when playing on harder difficulties. This is simply not the case with Valhalla, because the game would not work in other regards if it didn’t.

Beyond the actual combat itself, there is now a new Skill Tree, that provides passive benefits to the player for each point spent. And even though  it can look overwhelming, it’s actually quite simple, with melee, ranged and assassin trees for all intents and purposes. Many of the Skills here actually make a return from Odyssey, so it shouldn’t surprise you too much.

Additionally, you now gain Abilities to use in combat by finding them around the world map, instead of through the Skill Tree. This means you must explore areas thoroughly or you might miss out on valuable Abilities that can make your life a lot easier.

Armor and Weapons are now static and there is substantially less of them, and I mean substantially. Players are now meant to find Weapons and Armor Sets and upgrade them and use them for their movesets or for the unique benefits they provide for much longer stretches of the game. Nothing is random, and players will get better and better loot as they progress the game and gain Power Level, which is kind of like their “level”.

There is one step in the right direction I’d like to point out though, and that is with the motion range of the different weapon categories. Ubisoft has managed to make each category feel unique and interesting, making me try them all out to see which were my favorite ones. In this regard I ended up rocking a Greatsword, because it has a fantastic moveset and it feels simply awesome to wield.

There can be no question that Ubisoft has done an outstanding job in the audiovisual department with both Origins and Odyssey, and this also holds true for Valhalla. 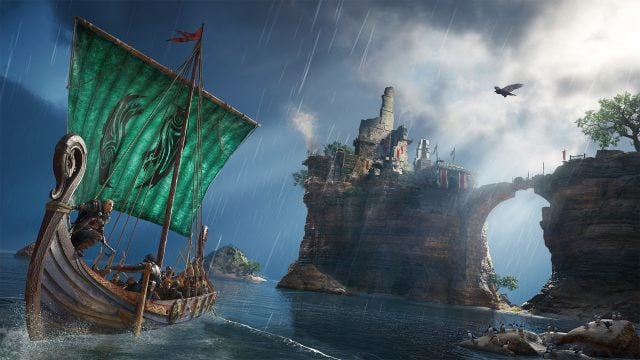 Valhalla is simply breath taking to look at, and despite what many have said about Ghost of Tsushima, Valhalla manages to hang in there against this rather tough competition. Particularly when it comes to the water effects, which are hands down some of the best in gaming today. You won’t be disappointed with how the game looks, I promise you that, though it may be challenging to get 60 FPS on your machine at higher resolutions. I myself was barely able to get 60 FPS on a 2080ti at 4k resolution on Ultra, and it dipped below that rather frequently. (Note that I am playing before the day 1 patch arrives) 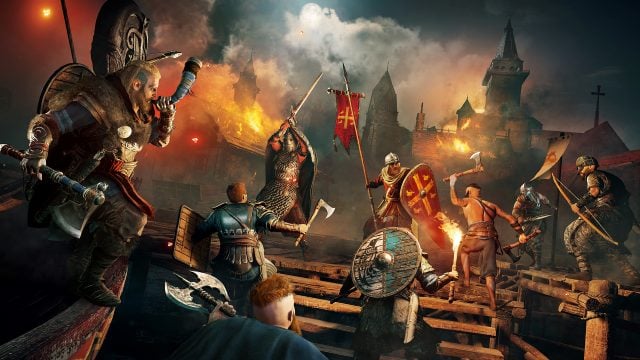 The sound is another area where Ubisoft has really stepped up their game, and there is dramatic improvement here. Not only is the music fantastic, but the voice over is some of the best we’ve seen from them yet. If Odyssey had you worried because of the mediocre voice acting, you shouldn’t be. Valhalla is so much better, and it doesn’t take long to see what I mean.

Regarding performance, and with the disclaimer that I played on Early Access so there was no day one patch yet, there were some hiccups on framerate as mentioned above. For bugs, I only experienced a handful of issues in my playthrough, but some were a bit glaring, including a broken quest that I could only complete by reloading a save from before I’d even started it. Thankfully that worked, and I wasn’t totally hosed, but Valhalla is not likely to be a completely flawless masterpiece.

The replayability of Assassin’s Creed Valhalla does not come from things changing a lot in a second playthrough, but instead by the amount of things you can do in the likely only playthrough you will do. You’re looking at easily 100+ hours if you do everything that you can, even with Ubisoft’s compacted map size when compared to Odyssey. This is not a small amount!

If we look at Ubisoft’s support for Odyssey, with multiple DLCs, patches and free content, and we assume that Valhalla will follow the same trend, you may be playing this game for months to come. I found it very easy to get lost in the world, doing mundane things like playing gwent… I mean, Orlog the dice game, getting into a drinking contest or Flyting my way to become a charismatic mastermind. Hours just flew by and there was still more and more content to do and unlock.

There are very few games that approach getting a perfect score in this category, because they generally need to have a lot of game hours and very very high quality. Many games get one or the other, but rarely do they get both. Assassin’s Creed belongs in that category.

If you look at our review for Odyssey you’ll see that we gave it a 9.7 in this category because of the sheer size and scope of the game. And while Valhalla is not as large, and will likely take players less time to finish, it is still exceptional value for your money. You simply won’t find many games this good with this much content on any platform. The others I can think of off the top of my head are The Witcher 3, Skyrim and likely the upcoming Cyberpunk 2077.

Valhalla marks the third installment since Ubisoft shifted directions with Assassin’s Creed, opting to add more RPG elements to their game and change it in many ways other ways that differed from the original titles. Being a huge fan of Odyssey and Origins, I was cautiously optimistic about Valhalla. Not because I expected the game to be bad, but only because as you get further and further into a franchise it becomes harder and harder to keep it new and fresh. And while I wouldn’t consider Valhalla “new and fresh” exactly, it does enough to keep a lot of the magic there alive without deviating too much from the things that made Odyssey so good. 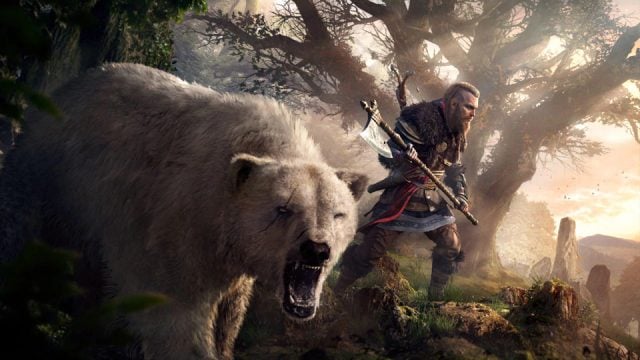 Assassin’s Creed Valhalla has shown me that Ubisoft is capable of making a third person action RPG that I will consistently buy on day 1 every time they make a new one, and that they listen to player feedback by cutting out a lot of the things from Odyssey that padded game hours but wasn’t particularly fun. And while I can’t say with 100% certainty that if you liked Odyssey you will like Valhalla (mostly due to the lack of stealth elements), I think it’s much more likely that you will than you won’t.

I sincerely hope Ubisoft moves on to a new franchise using what they have learned from Origins, Odyssey and Valhalla to make something that is not constrained by actual history or having to weave the assassin order into the plot somehow. I want Dragons, Demons, Castles, Dungeons, Trolls and much more made in the same vein as Odyssey and Valhalla, and I want it yesterday!!!

9
Summary: Assassin's Creed Valhalla is an epic Viking tale with a compelling story and amazing audivisuals. Promising hundred plus hours of gameplay, with minigames and exploration, Action-Adventure fans will not want to miss out on what is one of the best games this year.
Story & Setting (9)
Gameplay (8.5)
Design, Audio & Visuals (9.5)
Replayability (8.5)
Pricepoint (9.5)