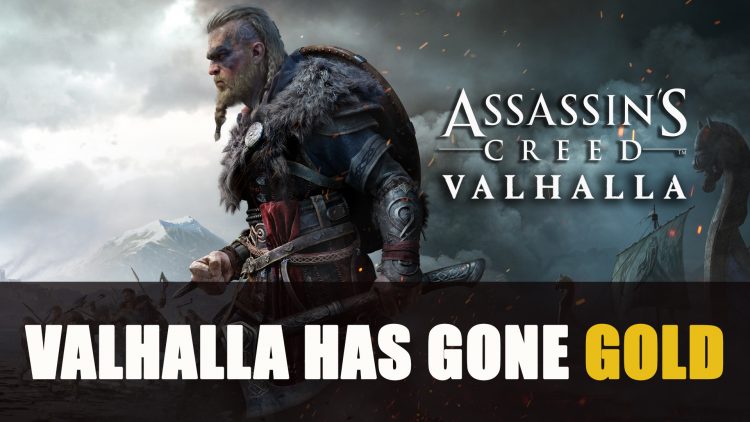 Ubisoft have announced that Assassin’s Creed Valhalla which releases next month has now gone gold, meaning it’s on track for its launch date.

Ubisoft have announced that upcoming Assassin’s Creed Valhalla has now gone gold, meaning that the game has been wrapped up and ready to be shipped for launch day. Initially Valhalla was set to release on November 17th, but was actually moved up to November 10th, which is unusual as we’ve mostly heard of delays this year. But we’re not complaining as it gives us more time to explore and become a true viking a week earlier.

November is going to be a busy month with a lot happening with console release Playstation 5 bringing the Demon’s Souls remake, and Xbox Series X, with Cyberpunk 2077 releasing on November 19th as well. We’ll be spoilt for choice with Assassin’s Creed Valhalla also releasing in this time frame.

Assassin’s Creed Valhalla will be full of myths, inspiring bloodthirsty creatures, but these aren’t the only enemies players will tango with. There are many human figures players will find throughout, which include the daughters of King Lyrian. Valhalla will have classic Assassin’s Creed traits including a bird companion for Eivor called Synin, and a hood that can be pulled up to help blend into a crowd. Expect powerful battle scenes and brutal finishers, as well as plenty of customisation when it comes to play style.

On behalf of everyone working on the game, we can’t wait to see how your own Viking saga unfolds.

Assassin’s Creed Valhalla will be releasing on November 10th on Playstation 4, Xbox One, Stadia, and PC. As well as Playstation 5 and Xbox Series X.

For more news be sure to read next Elder Scrolls Online Witches Festival 2020 and Atelier Ryza 2 Launches In The West In January 20210.