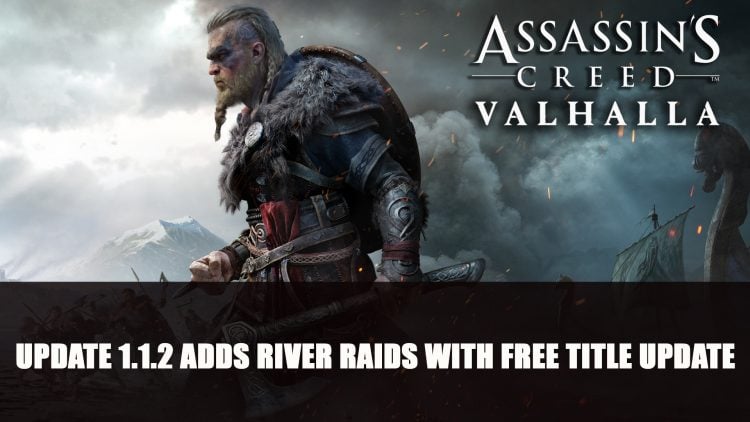 Ubisoft have shared that free new content is coming with the next update 1.1.2 for Assassin’s Creed Valhalla.

The next free update for Assassin’s Creed Valhalla, update 1.1.2 adds new River Raids mode to the game, described as “highly replayable”. The new update will arrive on February 16th for all platforms.

River Raids as described by Ubisoft, while doesn’t give away much, shares that it will take players to unexplored regions of the UK, across three new maps. Players are encouraged to construct the new Jomsviking Hall settlement building to recruit more Jomsvikings before embarking on raids. This will help bring further support, new loot, rewards, and challenges along the journey.

This update is part of the game’s first season of post-launch content, it also introduces a number of new Abilities and Skills. One of those new skills is the Berserker Trap, which can be added to arrows and triggered by proximity movement, spreading a hallucinatory powder. There is also Battle Cry, an ability that emits a battle-ready shout, increasing Eivor’s strength and causing enemies to stumble, while interrupting their attacks. There is also the addition of Shoulder Bash, which pushes back enemies and destroys objects in the process.

For new skills, players can use a body shift with Assassin’s Carry after successfully assassinating an enemy. There is also  Assassin Slide which can be used to run at enemies and knock them off-balance. Arrow Looter will increase Eivor’s chance of looting arrows from archers, while Fight Ready gets Eivor ready for battle with starting with one adrenaline slot filled. Then there is Power Stroke which delivers a longship speed boost costing stamina, and Long Ship Brace, causing the crew to raise their shields when you command them to.

The title update also comes with a number of life improvements, balance adjustments, and bug fixes, all details in a post on the Ubisoft website.

Assassin’s Creed Valhalla will be getting a host of post-launch content this March as part of Season 2, which includes a new game mode, new festivals, gear, and cosmetics. Seasons 3 and 4 will come later this year, as well as two large season pass expansions. The next DLC expansion being Wrath of the Druids and then The Siege of Paris. For all your Viking needs head to our Assassin’s Creed Valhalla wiki.

For more news be sure to check out next Kingdom Hearts Games Are Coming To PC As An Epic Store Exclusive and for a rundown of recent RPG news find it here in Top RPG News Of The Week: February 14th (BlizzConline 2021, E3 2021, Disco Elysium And More!).