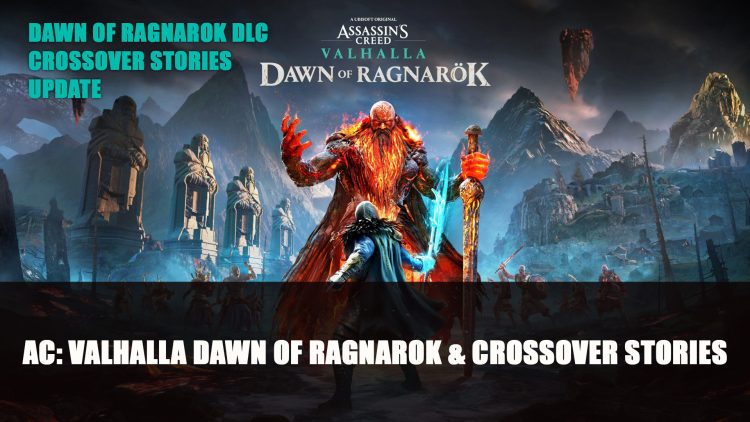 Today, Ubisoft unveiled two major upcoming releases for Assassin’s Creed Valhalla. It was hinted that new content was coming last week in a rather cryptic Tweet with the Assassin’s Creed logo being surrounded by frost and flame. All was revealed today including a new DLC Dawn of Ragnarok and two Crossover Stories coming to Valhalla as well as Odyssey.

Two new trailers were released on December 13th and it was confirmed that the new DLC will be titled Assassin’s Creed Valhalla: Dawn of Ragnarok, an ambitious expansion for Valhalla, and Assassin’s Creed – Crossover Stories, the latter of which will also breathe new content into Assassin’s Creed: Odyssey. 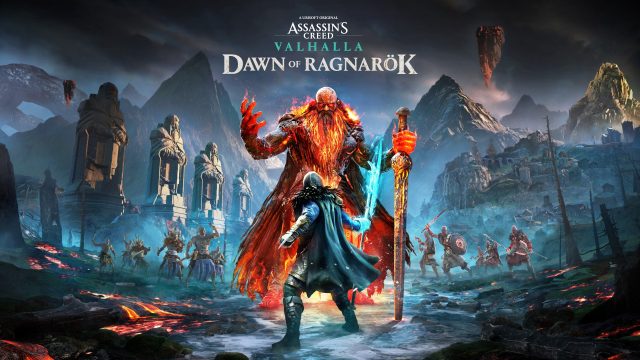 The first major piece of content will be the Dawn of Ragnarok DLC. We were treated with a very well-done cinematic trailer. In it, we catch a glimpse of the roots of the World Tree hanging above the dwarven realm of Svaralfheim, filled with magnificent fortresses, bustling forges, and crumbling statues.

Without much warning, suddenly the main antagonists of the DLC march forth, the frost-themed enemies from Jotunheim and the burning foes of Muspelheim tailed by Surtur, a fire giant. From there, Odin is revealed as he executes a minor foe and then the action begins.

The full trailer can be seen below:

Dawn of Ragnarok Story and Details

Eivor will take up the mantle as Odin, the Allfather and Norse god of wisdom, in this newest expansion. Dawn of Ragnarok’s story focuses on Odin’s journey to rescue his son, Baldr. He will need to travel through the dwarven realm of Svaralfheim and become an ally to the dwarves. True to Assassin’s Creed, he will also infiltrate and take over numerous forts and strongholds, battle a host of new enemy archetypes, explore varied and vast lands, and discover many secrets. 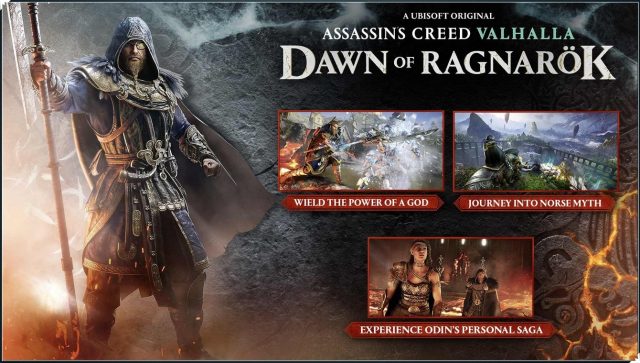 Players will be able to wield magical powers that they can gain from defeating enemies. In line with the teaser Tweet, Odin will be able to make use of both Fire and Frost themed abilities.

The trailer features a few of them already. Odin gets a raven form that allows him to perform stealth executions, he can use an enchanted bow that instantly teleports him to wherever his arrows land, and he is able to resurrect fallen foes. Other powers not featured in the trailer are the ability to take on a magma form that protects Odin from damage and imbue his weapon with ice to deal frost-enhanced strikes.

Assassin’s Creed Dawn of Ragnarok will be the third paid DLC for AC: Valhalla, after Wrath of the Druids and The Siege of Paris.

The Dawn of Ragnarok DLC for Assassin’s Creed is scheduled to be released on March 10th. It will cost $39.99 USD and will be available for Xbox One & Xbox Series X/S, Playstation 4, Playstation 5, PC via the Ubisoft and Epic Games store, as well as Stadia.

Preordering the expansion will give players access to The Twilight Pack, which contains many cosmetic items: the Dellingr’s Envoy Raven Skin, the Havardr Lynx Mount, the Twilight Gear Set and the Algurnir Dane Axe Weapon.

Like in Dawn of Ragnarok, we are treated with another cinematic trailer that features the two protagonists of our latest Assassin’s Creed games, namely Eivor from Valhalla and Kassandra from Odyssey. We see Eivor watching over the other from a distance, calling out to them. After a brief introduction, the two start fighting each other (perhaps to prove to us who’s the better heroine).

Assassin’s Creed Odyssey – Those Who Are Treasured

Those Who Are Treasured will be the first piece of DLC and will send Kassandra to Korfu Island (it looks like her brother won’t be making this journey if players selected to play as him).

On this island, you will be able to play the new content as well as unlock new Valhalla themed rewards. You can play the DLC almost immediately after completing Chapter 1 and find the quest starter at Sami’s Port on Kephallonia Island. However, since this crossover’s story takes place after the main quest, it is recommended that players only attempt to visit the new location after completing the main game.

On the Norse side of things, you will also be sent to Korfu Island and unlock rewards based on Odyssey’s motif. The new content also unlocks after Valhalla’s first chapter and is also recommended to be played last to avoid spoilers for the main game’s campaign.

Valhalla will be updated to Title Update 1.4.1. This will include new Difficulty Settings that can let players tweak the parry timing windows and brush with death-related durations. The Stealth system can also be altered by allowing modifications to detection escape timing, enemies’ search durations, and the maximum number of foes that will seek out Eivor at any given time. 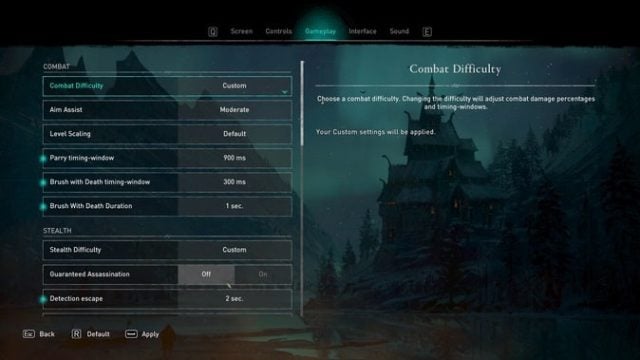 The full list of changes can be found in the game’s patch notes and will be available for everyone at the same time as Those Who Are Treasured. Title Update 1.4.1’s size will vary from 40 GB to 77 GB across different platforms.

It’s a perfect time to jump into Assassin’s Creed Valhalla. For more info, be sure to drop by our Assassin’s Creed: Valhalla Wiki. We also have a review and beginner’s guide to help you decide if the game is for you.