As more Free-to-Play games try different monetization strategies, ArcheAge has come up with a novel idea. With the release of ArcheAge Unchained, you can now opt to purchase the full version of the game that contains only cosmetic micro-transactions, or you can try the F2P version of ArcheAge, where buying things from the store is a must to explore all content, but both versions of the game exist in parallel and get the same updates.

I am usually curious about MMORPGs but I tend to stay away from F2P MMOs as they eventually get to a point where I just wish I could simply purchase everything in one big lump. Archeage Unchained promises to deliver just that, with the added benefit of not removing their F2P version for those who prefer to play it for free. The developer has bold promises:

There is no subscription model in ArcheAge: Unchained. Credits can only be spent on vanity items and upgrading the free seasonal ArchePasses.
The premium version of the ArchePass offers an additional chance to obtain cosmetic items.
It’s all about your skills, your dedication and the decisions that you make!

Most people would be wary of a game that comes from a F2P background, and then adds a model that charges you a full fee up-front. With Archeage Unchained, the game’s content, its zones and pvp, can now all be purchased initially, and thus roadblocks to endgame or convenience perks can be acquired from gameplay instead of via the store. Archeage Unchained does feature a store, however, it only sells cosmetic items. 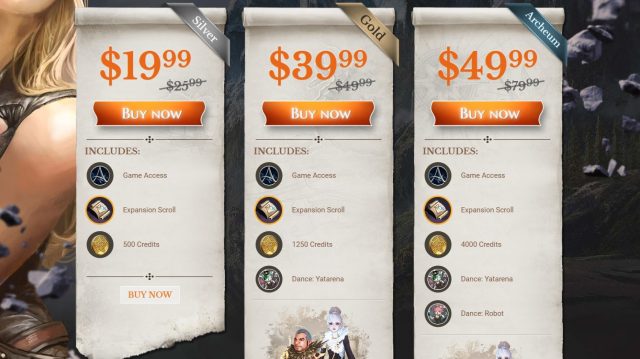 ArcheAge Unchained is scheduled into “Seasons” of three months. Each season gives players the opportunity to join a “Pass” focused on Combat, Vocation or Equipment. Players can then participate in missions to level up their passes, usually over the course of a month, and obtain higher tier rewards.

The free version of the ArchePass (which is available to all ArcheAge Unchained players) rewards “Diligence Coins”, which are a currency used in the Marketplace. Marketplace items that offer an advantage, such as Labor recharges, boosts, farm kits, etc, can only be acquired with diligence coins which means they cannot be bought and must be earned. 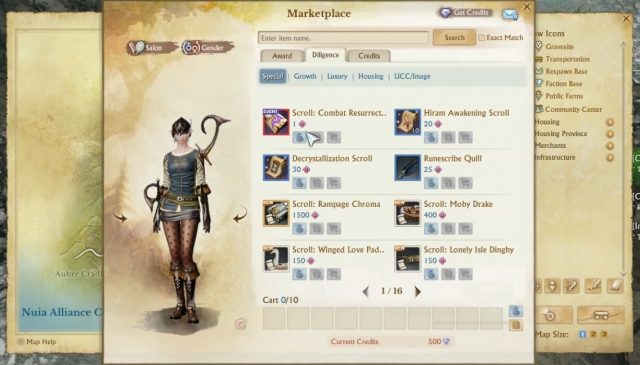 The Classes of ArcheAge

I was a bit surprised to find out just how deep the class and skill system is in ArcheAge. This was, of course, very welcome since I love to customize, but a bit difficult to wrap your head around. For starters, you will be initially prompted to select a Race, and each one has special bonuses. The Elves have gotten a revamp, so I picked an Elf, but you can be one of several unique and stylized races and customize your character. Your starting race will determine your story, initial zone, and racial questline. 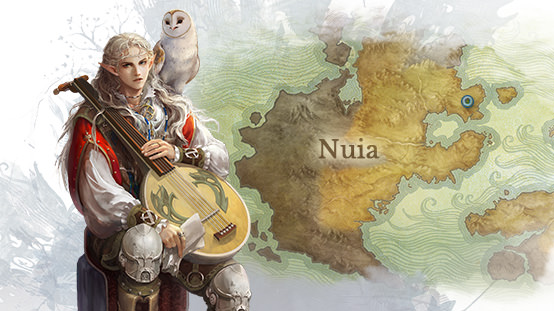 Next up you’ll be prompted to select your starting “Class”, but it’s not the end-all. The game is based on a multi-class system that allows you to freely combine 3 of the 12 different skill trees available, tailoring your character to what suits you best. The Swiftblade is the new addition, so I also picked that for my playthrough, and matched it up with Archery and Shadow. Your unique combination of 3 Skill Sets will result in an actual “Class” – of which there are… 220!

You will initially unlock a second Skill Set at level 10, then a third one at level 15. However, you will also be looking forward to the “Ancestral” system after level 55! this means there’s a long and rewarding road ahead of further customization.

Skills themselves have ranks, so if you have skills equipped on your bar you will rank them up as you play. This is important to note since you don’t want to miss out on experience or make changes at late-game!

Overall, the variety of skill combos, upgrades, equipment tinkering, and crafting creates a distinct and unique approach to playing, and I found it to be a lot of fun, if somewhat intimidating to start. 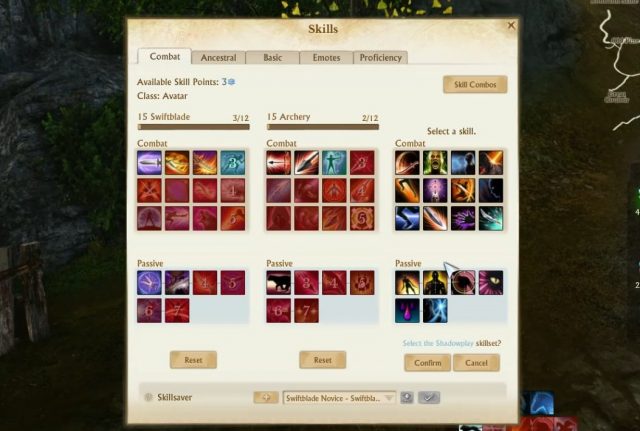 The game really opens up after level 30, when you unlock crafting professions and gain access to the world at large. The game has 22 crafting professions, that are balanced by a “Labor Point” system. Anything craft-related you try to do, from picking up a flower, to mining, to building, will cost Labor Points. These points refill over time at a steady pace, and the Unchained version of the game has the same refill speed for everyone, no matter whether you’re playing the paid version or F2P.

Professions have tiers of craftmanship, as well, which will determine what you can do and how well you can do it. Getting into this aspect of the game provides a significant amount of customization and detail, and will be particularly attractive to those who like tinkering. In total, there are a whopping 10 tiers for the 22 professions, meaning a dedicated player can sink hundreds of hours into this aspect of the game alone. 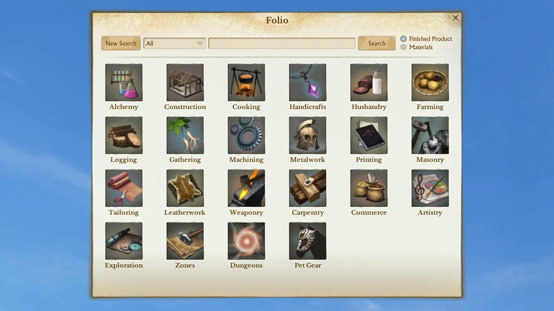 The world of ArcheAge is MASSIVE, and there’s a wonderful variety of zones and enemy designs. During my time with the game, I traversed rolling hills, climbed to the peaks of snowy mountains, dwelled in mines and dungeons, explored a desert, lounged at a beach, escaped an enchanted forest and even visited an ancestral Elven woodland with beautiful trees. Enemies in each area were different, their attacks and capabilities unique, and I died a few more times than I care to admit. In short: I really felt like I could go around and explore and not get tired of the landscape, which is no small feat to be sure.

In addition to crafting and exploration, players will find that there are fun things to do in game of a less serious nature – from rowing your own boat to commanding a battleship, fishing and farming, to paragliding your way through the skies, to making a shortcut down a mountain. It is a lot to process at the to start, but you’ll be introduced to each aspect slowly, first showing carts that travel around the world and then saying “hey how about you jump on this flying ship to make it across the ocean”. 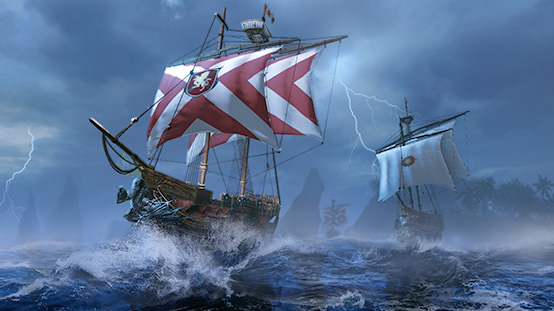 The gameplay of ArcheAge is  deceptively straight-forward at the beginning. You begin with a prologue sequence that teaches you basic controls, but gives little or poor context to what is going on, and I found that it was after the prologue where I really began to enjoy the game. Archeage gives you somewhat linear quests delivered in typical Korean F2P MMO fashion: no voiceover, simple objectives, press F to skip and get on with it! However, the quests are actually not bad.

The quest log shows you a separate tab for your Race Quest, that has special cinematics explaining to you the history of your race and your progress against these objectives. As I was playing an Elf, I got to learn a lot about their lore and dwell in their ancestral grounds, which was beautiful and calming. I found the overall storytelling is better than average for an MMO, although it is not the reason to play this game.

The side-quests vary from fetching, killing, harvesting to talking to other NPCs or bringing warning of incoming attacks. They were just different enough to stay interesting and simple enough that it didn’t interrupt the flow of things, which I appreciate in a game of this size (or you’d never finish them).

A very positive aspect of ArcheAge is its flawless guidance to quest objectives and what to do. The map and quest tracker are very accurate and useful, and make progression in the enormous world a lot easier than I have found it in other large games (looking at you ESO). You can also use quest items directly from the quest tracker, which makes it a lot simpler to execute commands and use special tools on enemies. Similarly, the map gives you a lot of freedom to mark the important things to you and filter out stuff you do not want to clutter your screen. 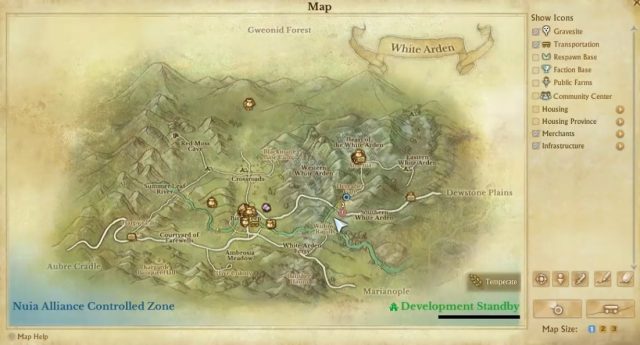 During my time with the game, I didn’t find it difficult to keep my inventory in check (even though I’m a natural hoarder) as the game gives you loot as an unindentified bag and therefore stacks it until you opt to open it (which costs “labor” points). I simply did my goodie bag exploring near a warehouse, so I could stash anything good I wanted to keep!

Skill management was slowed down by progression, thankfully, so I had time to learn what I liked about each skill and could decide what to take later on based on what combos were available. You will not be overwhelmed right away and don’t need to go looking for builds from the get-go like in other games.

The backbone of the game is of course its combat, which is woven into the class and skillset system. You will be encouraged to perform combos with your skills, which you should discover as you level up and rank up each one. ArcheAge features many combat buffs, debuffs and effects that are applied through skills, scrolls, potions and food consumables, so there is plenty of mechanics to dive into for endgame.

The beginner part, which is what this piece focuses on, does not need extreme tinkering or understanding for progression. That said, the game is not easy and if you keep your starter weapons all the way, you will likely die a lot. It will slowly ramp up the difficulty and challenge you to find enemy weaknesses and react better to their unique movesets and skills.

Game performance is certainly an important factor for MMO players, and I was happy to find no connectivity or framerate issues while playing. The game is not visually stunning, as it’s an older game and it started F2P, but it is still immersive and it is well-optimized to perform at low latency. Additionally, there are options for setting your graphics lower and and an auto-optimize option, which you can do if you have a less powerful computer. 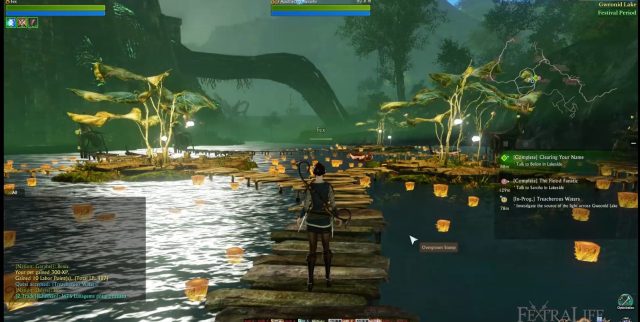 I would have loved to have more time to play to get to endgame and explore the deeper aspects of ArcheAge, which include large PvP battles in the Arena, world and NAVAL areas, as well as hardcore crafting, a complex trading system and many seasonal events with their rewards such as the ArchePass.

As it is, I have only just dipped my toes in the ArcheAge waters, and I found them most pleasant. The game lures you in with a nostalgic fantasy world, sets the tone with very atmospheric music, and lets you explore and have fun slowly without demanding too much of you as you take your first steps. But it also asks that you pay attention to your equipment and skill rotation by gradually deploying harder enemies to face you.

I am a completionist so I could see myself losing so many hours in the game just exploring, learning crafting, and making my way to the endgame zones. If you’re tempted by this idea, there’s a free weekend going on right now (April 9th to 13th 2020), that is also a charity drive, so why not download and check it out, and let us know what you think!