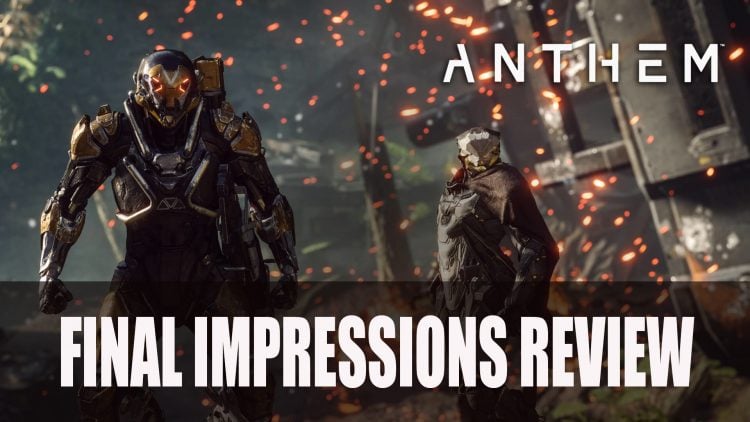 Let’s address the title of this article right away, this is my final impression of Anthem, and it is based on about 15 hours of gameplay. I will probably finish the game eventually but that is far more due to professional curiosity, than actual enjoyment of the game. I don’t feel that Anthem is necessarily a bad game, in fact there were moments when I had a lot of fun with it. Unfortunately that fun struggles to emerge through a thick layer of tedium.

The Whiplash of a Story

Players will venture into a harsh environment that threatens humanity. Choose powerful Javelin exosuits, each with great abilities to help even the playing field, with the masses of beasts and creatures that have inhabited the land. The lore focuses on mythical gods that created a planet but disappear before it was finished, and a mighty power called Anthem.

Story isn’t exactly a critical component of a looter-shooter in my opinion, though it is nice to have. However this is a BioWare game and there are certain expectations in terms of quality when it comes to their stories. For me, the best way I can describe the story in one word is whiplash. I’ll be enjoying the narrative, starting to care about the characters, and then Bam! Something dumb is said. Or a setup is utterly forced, a very vague description I know, but I do not want to spoil anything. 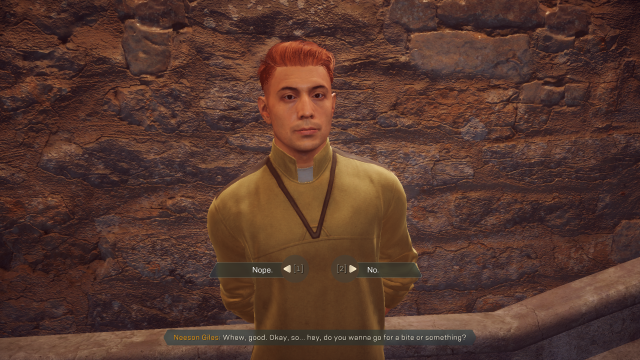 Behold the pinnacle of branching dialog

Every time it started getting good, something happened to break my enjoyment of the story, a good example of this is the the “Tombs of the Legionnaires” quest. I will simply say that it is an objective storyline telling facts, but the placement of a sudden massive grindy block in the middle of the story kills pacing and immersion. Yes I know the patch helps alleviate this issue a bit, but depending on your play style, you could still be facing a massive grind here. It makes me sad the story is so erratic, because the world BioWare have created is a very interesting one. Hopefully future content will better highlight this as it’s something I feel players will enjoy.

First let me address that the UI sucks, it really, really does. In nearly every aspect. I will give BioWare credit where credit is due, they greatly improved the mission launch UI since its VIP demo. It was a confusing mess on day 1, and the patch greatly improved many aspects of this. However the rest of the UI still remains in disarray on PC. Far too many clicks required to navigate through settings, confusing layouts, slow response times, and it is just aggravating to find the information needed. 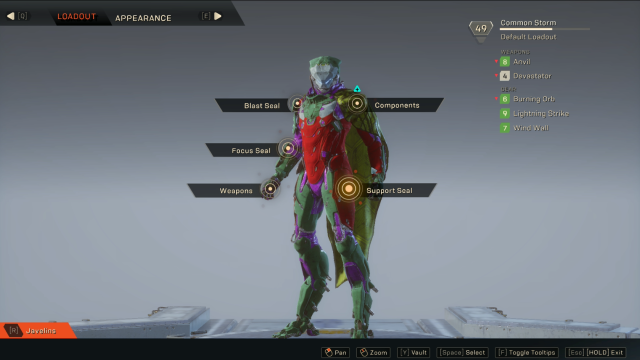 The crowning UI failure though? This is a looter-shooter, you have stats, your gear has stats, your gear has stat modifiers, and yet there is no singular screen you can open at a glance and to see all your stats with ease. This is a critical UI failure, and hopefully something they address quickly. Why does this all matter? Well if you even remotely care about looking up your daily/weekly/monthly tasks, or if you want to checkout the codex, you will be dealing multiple windows in this UI, making you work harder than you really have to.

The most stunning of mission designs is on display here, note the intense sarcasm. Go play hot-and-cold and find three orbs, then bring them back to a location. Then, you will need to find a further 6 orbs, and low and behold, bring them back to location. You can’t relax though, because before you have time to recover from all this staggering innovations, you are sent to find 12 orbs and yet again bring then them back. 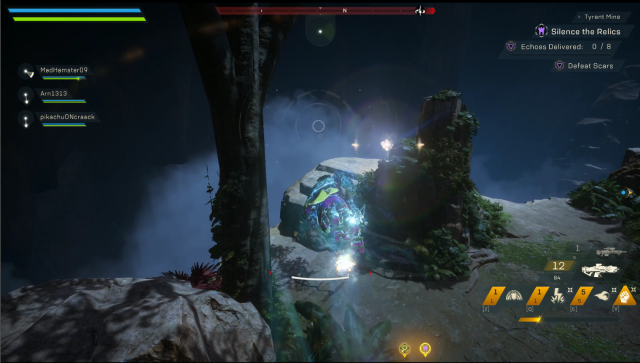 You do this three times in the Tyrant Mine stronghold. Three. Times.

Oh and they have the occasional kill all the things and defend this point as well.  Sigh.  What I feared from the demo came true, the mission design is not well varied at all. It doesn’t help that 90% of the time you are fighting two enemy types, the Scar and the Dominion, and there’s little difference between them. Toss in the occasional bullet black hole (I mean they should be named this as this is where all the bullets just disappear into) and you have your mission design.

Here it is, ladies and gentlemen, here is the part that will either sell you on this game or cause you to run away, it comes down to combat and movement. How badly do you want to be Iron Man? Once again I will give credit where credit is due: BioWare greatly improved the flight mechanics on PC with a mouse and keyboard. It is amazing to fly around the world, abilities are enjoyable to experience, some of the guns are fun to use, and movement in combat is very fluid. The AI is about as smart as a bag of rocks but eh, whatever, makes ‘em easier to blow up. 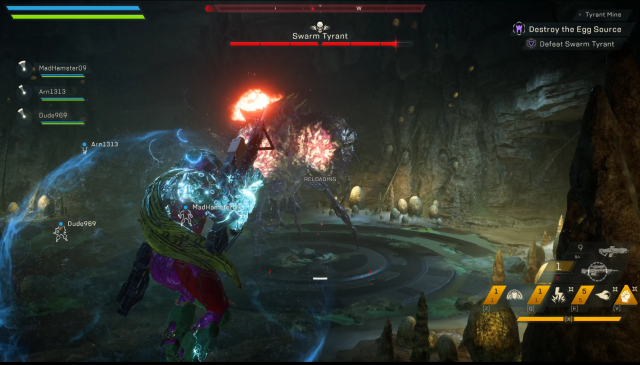 The big question is…is it enough? Will you enjoy the combat and flight mechanics enough to cover up the flaws and endure the load screens as you grind the same three strongholds over and over and over again? I personally don’t think so.

Anthem needed at least another 2-4 months in development, while this would not have fixed all the problems, it could have led to more variation in mission types. More time could have improved enemy AI to make the two enemy factions feel noticeably different, and add additional end-game content which I felt was lacking. Hopefully BioWare has been given time by EA to get things fixed as there’s a decent game here underneath all this mess.

If you enjoyed reading about Anthem be sure to check out VIP Demo Preview as well as more content in Anthem Producer Reaffirms Loot Boxes Will Not Be In The Game and Bioware Shares How Anthem Could Influence New Dragon Age And Mass Effect Games. You can also check out more Bioware in Bioware Teases Announcement Next Dragon Age Game At TGA 2018.

6
Summary: Anthem is an excellent Iron Man simulator bogged down with poor mission design set in a fascinating world with a lack-luster story. Coupled with a critical lack of end-game content, this is by far the weakest offering from BioWare. Enjoyment of this game will fully rest on how much you enjoy the combat.
Story & Setting (6)
Gameplay (6)
Audio & Visual (7.5)
Replayability (5)
Pricepoint (6)