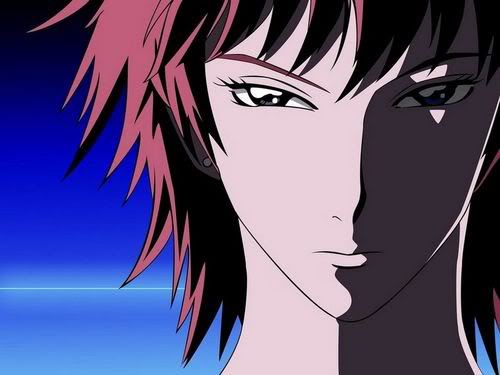 I was hanging out with my roommates one night and we got on a martial arts movie clip binge where we’d all look up fight scenes from various martial arts movies and bask in the kung fu action.  I had a thought of “anime has a lot of over-the-top fight scenes too, I should find some of those to show!”  At which point I realized that every series I’d ever seen with good fight scenes all involved armed combat with weapons, nothing hand-to-hand to match the mood of the night.  So I set out to find anime that had good unarmed combat.  By scouring for clips of fight scenes I found two series, Air Master and Hajime no Ippo.  Since the latter is very, very long, I’ve only finished the former, and I now present my thoughts on Air Master.

In the city, there exists an underground culture of street fighters who spend every night doing their namesake; brawling in the streets.  Our main character is Aikawa Maki, who has recently engrossed herself in this culture and due to her unique fighting style has made a name for herself as the titular Air Master; a fighter who is seemingly capable of flying.  The series follows her path to become the strongest fighter on the streets.

If you’ve read my other reviews, you may notice that this is the shortest premise I’ve ever explained, and that’s because there’s really not much more to this series than that.  She fights people who have various unorthodox fighting styles, and outside of maybe two or three recurring opponents there’s very little lasting implication to any of the fights besides maybe Maki picking up a new technique or two to incorporate into her own style as she climbs the ranks of fighters.  But the story isn’t the reason people watch this kind of series, and Air Master definitely is aware of this.  What little story is there is merely an excuse to show off more and more outrageous fight scenes while allowing them to keep escalating in intensity.

Again, the series is very self-aware of why people are watching it, and so like the story the characters get very little focus or attention.  They typically have only one or two defining traits that identify them, and the only characters who receive anything resembling a growth arc are actually in the supporting cast and even then not until well into the latter half of the series.  Maki is kind of stupid and unable to truly understand anything but fighting.  Sakiyama Kaori is obnoxious and self-absorbed.  Renka is a whiny little kid.  And with the exception of one or two, every character in the series can be completely explained this briefly.  Most of the personalities are simply meant to be a kind of explanation for what kind of fighting style a character chooses to use.

I do have to give it props for being a male-focused show that chooses to have a female lead character, as well as not forcing her into female stereotypes by making Maki a very rough and athletic type while also avoiding the use of any blatant or overt fanservice.  So that’s a plus. Alright, so the story and characters took hits so the series could elaborate on its fighting and action, so the animation must be pretty good, right?  Thankfully, yes.  Like I said, I initially found this series by searching for impressive fight scenes, and finding a series that consistently animates all of its action in detail without resorting to typical animation cheats like “the clash” or “faster than the eye can see!” attacks is still a rarity.  Mind you, this series IS a decade old, so it doesn’t quite hold up to modern-day standards, but it still manages to look impressive when it wants to.  This all only applies to the action scenes though as, like everything else, slower character or story scenes rarely are anything noteworthy to watch.

Mention should also be made that, if you haven’t noticed already from the couple of images in the article, the general art and character design is…rather different.  Mostly apparent in characters’ faces with the eyes and noses, things don’t look like a typical anime.  Lines are alot heavier and rounder than normal, and to anyone used to the medium this may make things feel off.  But to me it was just an acquired taste kind of thing and after the second episode I was used to it.

Umm…I didn’t really notice anything here.  The opening theme was pretty good, I guess?  I guess it wasn’t bad or else I’d have something to say about that.

There were 9 DVDs encompassing the whole series, but only the first 3 were released in North America after being licensed by Geneon.  These suffered from incredibly poor quality with the localization and so the rest were cancelled, leaving most of the series unable to be obtained outside of Japan.  After Geneon went under, Funimation bought the rights to the series and while they never made new DVD releases or dubs, you can supposedly stream it all for free on their website, but anytime I try it seems their streams for the series are out of commission.  My ultimate recommendation for this one is to just find and download the fansubs, but I realize we can’t really do anything that might seem like advocating piracy since Funimation does technically own the rights to it.  Unfortunately, otherwise the series doesn’t really seem to be officially available anywhere so I’m not sure what the most professional way to present this all would be.. Before I move on to my final thoughts below, I feel I must present at least a sample of what this series does manage to do right.  So if you can, take a moment to observe this bit from the first episode:

You can read more reviews here.